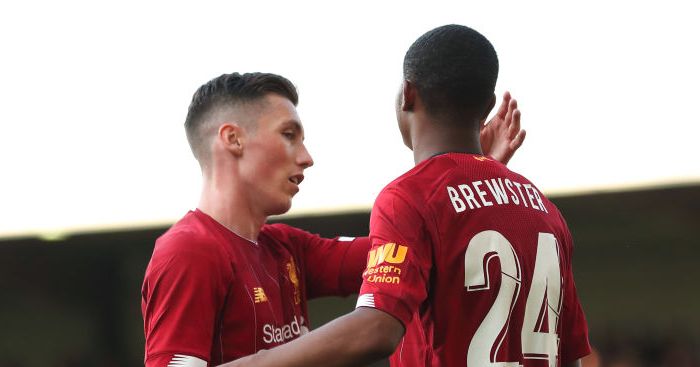 It’s about time Man United gave Dean Henderson his chance. We have one returning loanee each Premier League club should play next season…

ARSENAL – William Saliba
The 15th most expensive centre-half in Premier League history has yet to even make his first appearance in the competition, although that makes him automatically better than the player in eighth. Arsenal will hope to produce more than enough Saliba next season, particularly if David Luiz leaves this summer as expected. The French teenager started 11 Ligue Un games in 2019/20, with Claude Puel’s side conceding 15 goals in that time. And that ain’t a half-bad record for a team battling relegation.

ASTON VILLA – Andre Green
There is more than a compelling case to be made for reintegrating Championship stalwart Scott Hogan if Aston Villa slip back into the second tier. But it would be interesting to see Andre Green given a few more opportunities either way after a disappointing loan with Preston and slightly more productive spell at Charlton this season. The 21-year-old has started seven league games for the Addicks, scoring two goals and assisting one. Lee Bowyer has even tested him in the unfamiliar position of striker and praised him for having “settled into that role better than I thought he would and quicker”.

BOURNEMOUTH – Alex Dobre
The cryogenic freezing of football was harsh on many a player building some late-season momentum, not least Alex Dobre. The 21-year-old joined Wigan on deadline day in January and failed to make their seven subsequent Championship match-day squads, finally earning a spot as an unused substitute in their last game before suspension. The Romanian was starting to catch Eddie Howe’s eye before then, however, sitting on the bench twice each in the Premier League and League Cup and once in the FA Cup, impressing in a ten-minute cameo on his Cherries debut in the third round of that particular competition.

Alex Dobre is a baller

BRIGHTON – Ben White
“We have been delighted with his progress. Leeds have done a brilliant job with him,” said Brighton technical director Dan Ashworth earlier this month. “We are delighted. Not surprised because we rate him but we are delighted with how well he has done. As soon as he comes back, we will see where we are, we will see where the season resumes, what league we are in. But he would certainly be part of plans in either scenario and a young talent we would be looking to keep here for a number of years.” No player has more minutes to their name for Leeds this season, with the 22-year-old attracting interest from Liverpool and both Manchester clubs.

BURNLEY – Anthony Glennon
Considering Dwight McNeil is the only Burnley player currently under the age of 26 to play more than a single minute in all competitions this season, the raft of youngsters returning from loans this summer might not fancy their chances of breaking through. McNeil himself has proven that it is possible to catch Sean Dyche’s attention, however, and Anthony Glennon could benefit from his versatility as a left-back who can play in central defence or midfield. The 20-year-old has “gained a lot of experience” under the “brilliant” Ian Holloway at Grimsby, and might justifiably fancy his chances of at least challenging Charlie Taylor next season.

CHELSEA – Conor Gallagher
Ethan Ampadu is the obvious choice as the more visible, hyped prospect, while Marc Guehi has impressed for Swansea. But the Welsh side also took midfielder Conor Gallagher under their wing in January and five assists in ten games is sure to have impressed Frank Lampard. That comes after a few months with Charlton at the start of the season, during which he scored six goals, assisted four and played in every position across midfield. He looks bloody brilliant.

CRYSTAL PALACE – Scott Banks
How Crystal Palace must wish they inserted a break clause in Manchester United target Alexander Sorloth’s two-season loan deal at Trabzonspor. The striker has scored 25 goals in 39 games for the Turkish club since joining in August and while Scott Banks has not been able to post such numbers at Scottish Championship side Alloa Athletic, Roy Hodgson praised “a very talented player and the right type we are looking for” when he moved to Selhurst Park from Dundee United for £200,000 in January. The fact that he is 18 should be enough alone to help him break into one of the Premier League’s oldest squads under the competition’s most senior ever manager.

EVERTON – Jonjoe Kenny
An unlikely stalwart of a mid-table Schalke side that remains without a win since Germany’s restart, Jonjoe Kenny was praised by manager David Wagner as “one of the most interesting right-backs in the Bundesliga” recently. He certainly stood out during their purple patches in the first few months of the campaign, with only fellow full-back Bastian Oczipka making more appearances for The Royal Blues in 2019/20. Seamus Coleman turns 32 later this year and Cuco Martina is Cuco Martina, so Everton could certainly make room and do worse – although that probably shouldn’t be Carlo Ancelotti’s transfer mantra.

a. being pretty desperate at present
b. the second Augsburg goal largely stemming from others not doing their jobs

Been ok. Nothing more, nothing less

LEICESTER – Filip Benkovic
Perhaps Brendan Rodgers will welcome Adrien Silva back with open arms like an old friend, ruffle the hair of Fousseni Diabate and tell Rachid Ghezzal that the biggest influence throughout his entire career has been himself. Leicester really do have an awful lot of talent dotted across the globe with no room to accommodate them at the King Power. But perhaps a space could be freed up for Filip Benkovic, who Rodgers worked with at Celtic. The centre-half made one Premier League bench and kept an FA Cup clean sheet before joining Bristol City in January, starting three Championship games thus far for the promotion chasers.

LIVERPOOL – Harry Wilson
Marko Grujic is probably the better player and has already outlined his plans to return, but Liverpool are well-stocked in midfield even when taking Adam Lallana’s likely departure into account. The Reds could instead look to bolster their attacking options without spending a penny, with Wilson taking the squad role of Xherdan Shaqiri and being brought on literally just to take free-kicks and look like Fernando Torres.

MANCHESTER CITY – Tosin Adarabioyo
“In five years’ time I’d like to be captain of Man City and have won the Premier League and the Champions League,” a rather optimistic Tosin Adarabioyo told The Guardian in January. The 22-year-old has been pretty much a regular at Blackburn, who have conceded fewer league goals than all but the Championship’s top five and Millwall. Pep Guardiola suggested it could be “an option” to use him next season as “he’s playing regularly”, although the manager has already taken a liking to a pair of younger centre-halves in Eric Garcia and Taylor Harwood-Bellis.

MANCHESTER UNITED – Dean Henderson
It might take Dean Henderson helping to guide his foster family above his parent club for Manchester United to finally take proper notice of the future England international. Even then, it seems as though David de Gea has more than enough credit in the bank to earn a reprieve for some haphazard performances this season. Ole Gunnar Solskjaer might consider it worth persuading Henderson to stick around just in case.

NEWCASTLE – Freddie Woodman
Since joining their academy in 2013, Freddie Woodman has been sent on five progressively higher loans by Newcastle. Hartlepool and Crawley, both in League Two, gave him a first taste of professional football, while spells in Scotland with Kilmarnock and Aberdeen were fruitful enough. But the keeper has played more games at current temporary home Swansea than for his previous four clubs combined, keeping 11 clean sheets in 37 Championship games. Martin Dubravka sure could do with better, younger competition than Karl Darlow and Rob Elliot.

If Newcastle get their new owners, will they get a new keeper, move Dubravka to the bench and get rid of Woodman?

NORWICH – Melvin Sitti
“Melvin is a very exciting player. He’s young, talented and we believe he has real potential,” said Daniel Farke upon signing Melvin Sitti and returning him straight back to sender at Sochaux in January. The midfielder planted seeds rather than ripping up trees in Ligue 2, and could be useful in whichever league Norwich find themselves in next season.

SHEFFIELD UNITED – Callum Robinson
Honestly, this is a stretch. Sheffield United have had no reason to loan players out other than having outgrown them, hence Mark Duffy, Ravel Morrison and Kean Bryan being shipped out. Callum Robinson was a club-record signing in July and scored only once in the Premier League before moving to West Brom in January and netting twice in eight starts. “He is going to be a player here for a number of years and we thought it was in his best interests to get him some regular football,” said Chris Wilder at the start of the year. It remains to be seen whether he will make room for the 24-year-old in his Champions League squad.

SOUTHAMPTON – Harrison Reed
With more prominent players Mohamed Elyounoussi, Guido Carrillo, Wesley Hoedt, Mario Lemina, Cedric Soares and Maya Yoshida currently out on loan, Harrison Reed might seem like a left-field choice. But Ralph Hasenhuttl bloody loves his academy products and the midfielder has fared well for Fulham, fitness issues aside. Mind you, he was on this exact same list last season and look how that went.

TOTTENHAM – Kyle Walker-Peters
‘Kyle, Tottenham is your home so you’re welcome to come back whenever you want,’ was Jose Mourinho’s alleged message to Southampton-bound Kyle Walker-Peters in January. “He said he just wants me to play, play, play. ‘Bang out as many games as you can.'” He managed just one before the world shat itself, but will hope to establish himself upon the Premier League’s imminent return.

Kyle Walker-Peters must stay at Spurs. He is talented. Give him more time, Mourinho.

WATFORD – Ben Wilmot
Once described by Glenn Roeder as the “best ball-playing centre-half since Rio Ferdinand”, according to Troy Deeney, Ben Wilmot was developing well at Swansea and even scored the winner against bitter rivals Cardiff before his opportunities dried up after January. He insists he can still break through at Watford as early as this summer, however: “My plan is to make sure they don’t have a choice, that they have to play me. Based off of this season and going into pre-season next season, giving the manager no choice but to play me.”

WEST HAM – Grady Diangana
It has done 22-year-old forward Grady Diangana the world of good to spend a season away from West Ham and instead enjoy football at West Brom. Five goals and six assists before a hamstring injury decimated his second half of the campaign was a fine return for a player David Moyes has already reportedly earmarked for a role at the Hammers next season, the manager eager to drag the average age of his squad down. Plus now Diangana has the sort of lower-league experience West Ham can call on when they’re relegated.

WOLVES – Luke Matheson
While he won’t be establishing himself as a first-team regular for some time, Wolves might consider that Luke Matheson is better off developing under their watchful eye and learning from Matt Doherty before eventually taking his place, instead of being sent elsewhere to play a handful of times, and never in the wing-back position he could one day make his own at Molineux. The 17-year-old has benefited from finishing the season at Rochdale but Wolves need to replicate that stability and resist the loan cycle temptation.