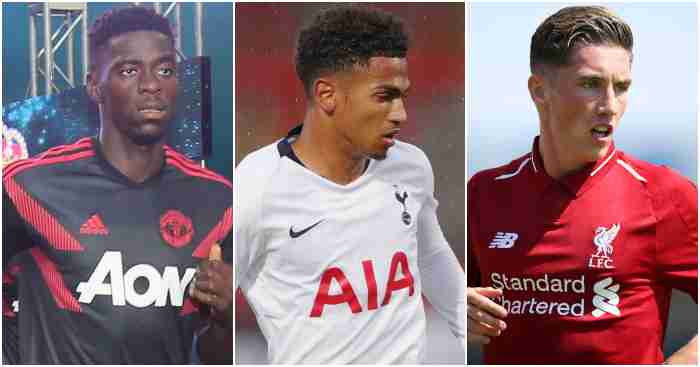 This list will include only players who will return to their parent clubs this summer, not those who headed back in the winter. We also include last year’s picks to embarrass ourselves…

Arsenal – Reiss Nelson (Hoffenheim)
The attacker made a blistering start to his year in the Bundesliga, so much so that Unai Emery faced calls to bring the 19-year-old back from Hoffenheim early. But injury curtailed his progress in the second half of the season and the Gunners have a decision to make: include Nelson in their plans next season, or send him away for one more season to smooth the edges a little more. If Arsenal qualify for the Champions League and Emery has the resources to recruit more experience as well as width, then it may be the latter.

Bournemouth – Connor Mahoney (Birmingham)
After a slow start at St Andrew’s, Mahoney established himself as a Blues regular and finished the season with the club’s Young Player of the Year award. Ryan Fraser’s probable exit could create some room in Eddie Howe’s squad for the 22-year-old winger.

Last year: Aaron Ramsdale – the goalkeeper spent the second half of the season impressing between AFC Wimbledon’s sticks.

Brighton – Alexis Mac Allister (Argentino Juniors)
The midfielder was Brighton’s only January signing but he was left in Argentina for the remainder of the season when perhaps a six-month induction to English football might have been a wiser move. The 20-year-old could offer the Seagulls some of the drive and creativity they have been missing this season, especially during a wretched second half of the campaign.

Burnley – Aiden O’Neill (Central Coast Mariners)
The Australian midfielder has been offered new terms after a successful season back home in A-League where he has dabbled in playing as a centre-half as well as in central midfield.

HIT! 🎯 @aidenoneill98 drives his shot low and hard, it finds the bottom corner and we lead @SydneyFC 1-0.

Chelsea – Tammy Abraham (Aston Villa)
If Chelsea really aren’t allowed to sign any players then they may have no choice but to give the once-capped England centre-forward the opportunity he craves. With 25 goals in the Championship this season, Abraham cannot have done much more to prove himself at Villa.

Last year: Ruben Loftus-Cheek – despite Sarri’s apparent reluctance, Loftus-Cheek was eventually given a run in Chelsea’s side and he hasn’t disappointed.

Crystal Palace – N/A
Jason Lokilo isn’t going to come back from playing 52 minutes in Ligue 2 with Lorient this season and tear it up in the Premier League.

Last year: No one then and no one now.

Everton – Henry Onyekuru (Galatasaray)
The winger has scored 13 goals and offered five assists in Turkey while also getting a taste of the Champions League. His performances for Galatasaray have earned Onyekuru national team recognition with Nigeria, which Everton hope will aid their attempts to resolve the work permit issues that have hampered the 21-year-old’s prospects of pulling on a blue shirt.

Last year: Ademola Lookman – the 21-year-old has been integrated with Marco Silva’s first-team squad making 21 appearances, though all but three have come off the bench.

Leicester – Filip Benkovic (Celtic)
Brendan Rodgers could be a centre-back down if any of the big boys stump up the asking price for Harry Maguire and the Leicester boss has already seen Benkovic at close quarters having managed him at Celtic before moving south. The 21-year-old defender, who joined the Foxes for £13million last summer, reportedly impressed Rodgers before an ankle injury ruined his momentum, but it seems likely Benkovic will be kept around, at least for pre-season.

Last year: Nampalys Mendy – the midfielder was a regular under Claude Puel but Rodgers benefited from the January arrival of Youri Tielemans. He made our worst team of the season.

Liverpool – Harry Wilson (Derby)
The 22-year-old has had a marvellous season in the Championship where he has netted 16 goals and four assists while playing a huge role in Derby reaching Wembley. At most other Premier League sides, Wilson would probably return to his parent club next season, but whether he can make an impact at Liverpool remains up to Jurgen Klopp to decide. If he stays at Anfield, it will be to compete with Xherdan Shaqiri for the role of back-up on the right of the Reds’ attack.

Manchester City – Douglas Luiz (Girona)
The Brazilian midfielder is only in Spain because he was refused a work permit last summer, a decision which left Pep Guardiola ‘sad and disappointed’. With plans for replacing Fernandinho gathering pace, Guardiola would prefer to get more familiar with Luiz, but whether the authorities will soften their stance towards the 21-year-old remains to be seen.

Manchester United – Axel Tuanzebe (Aston Villa)
Ole Gunnar Solskjaer has already stated that he wants to see what the defender can do: “I’ve been keeping tabs. Obviously he’s had a couple of injuries but he’s a boy I can’t wait to see in pre-season for us.” Presumably no worse than Phil Jones. Some people think he should be United’s new captain.

Last year: Andreas Pereira – given an opportunity by Solskjaer but offered little indication that he can help dig United out of their current hole.

Newcastle – Jacob Murphy (West Brom)
The winger has had an indifferent spell at The Hawthorns since moving in January but Rafa Benitez isn’t blind to the former England Under-21 international’s potential. Whether the Newcastle boss saw enough in Murphy in the Championship to include him again in his plans for next season remains to be seen.

Norwich – N/A
If they weren’t up to it in the Championship, they certainly aren’t good enough for the Premier League.

Sheffield United – N/A
As above.

Southampton – Harrison Reed (Blackburn)
The midfielder enjoyed another productive season in the Championship, demonstrating his versatility by playing in a variety of positions across the middle for Tony Mowbray. At 24 years old, it really is now or never for Reed.

Tottenham – Marcus Ewards (Excelsior)
The attacker once described as ‘mini Messi’ seems to have got his performances and, perhaps more importantly, his mentality back on track in Holland. Edwards is out of contract in a year so it makes sense for Mauricio Pochettino to have a good look at the 20-year-old in pre-season. If he impresses, Spurs may feel obliged to give the academy graduate some incentive in the form of game time to keep him from walking away as a free agent.

Last year: Cameron Carter-Vickers – A regular for Swansea this season.

Someone's put together some highlights reels of Marcus Edwards at Excelsior. Unsurprisingly, of anyone who has played any substantial minutes, Edwards tops the Erevidisie successful dribbles per90 (above Ziyech).https://t.co/YF1pxAsziqhttps://t.co/pLdO3XjB0t#COYS #THFC

Watford – Ben Wilmot (Udinese)
The defender made only four Serie A appearances after moving to Italy in January but facing Juventus, AC Milan, Lazio and Inter is reasonable preparation for his attempt to make the breakthrough into Javi Gracia’s squad, a year after the Hornets won the race to sign the England Under-20 defender from Stevenage.

Last year: Cucho – struggled to replicate his impact during his first season on loan at Huesca, who like the Colombian, but not enough to pay £20million.

West Ham – Edimilson Fernandes (Fiorentina)
The midfielder has the best chance of any of West Ham’s loanees of playing a role under Manuel Pellegrini but the Hammers will have to persuade the 21-year-old to leave Florence after a successful stint in Serie A. “The boy is very happy with his experience in Fiorentina, he is very happy to be in Italy,” said his agent this week. If the feeling is mutual and Fiorentina are willing to pay the £7million option, at least West Ham will make a profit on the £5.5million they paid Sion in 2016.

Last year: Reece Oxford – No nearer achieving the potential that saw West Ham give him a five-year contract before he eased off the gas. The former England youth international looks set to join Augsburg permanently.

Wolves – Benny Ashley-Seal (FC Famalicao)
The young forward was given a taste of first-team action in the Carabao Cup before being sent out on loan to the Portuguese second division. Nuno would only allow the Under-23s top scorer to go once he had signed a long-term contract and with Wolves shedding some fringe strikers this summer, there will be opportunities to offer Ashley-Seal increased exposure to first-team football.