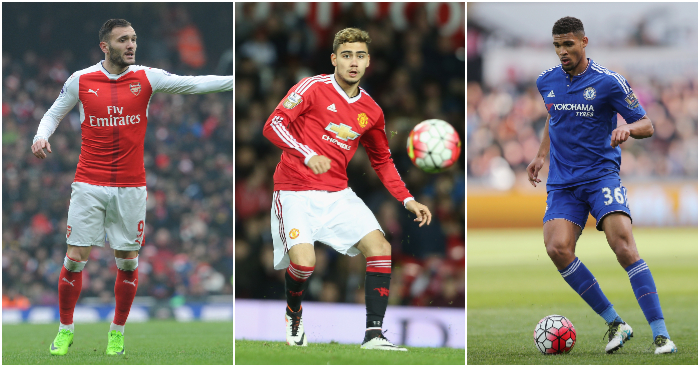 This list will include only players who will return to their parent clubs this summer, not those who headed back in the winter. We also include last year’s picks to embarrass ourselves…

Arsenal – Lucas Perez (Deportivo La Coruna)
Eight goals for a team relegated from La Liga is a pretty decent return but the really encouraging statistic is that the Spanish striker made 79 key passes across the course of last season, a total second only to Lionel Messi in the whole of La Liga. And that’s for a poor side. That kind of creativity would put him in the same bracket as Mesut Ozil (84) at Arsenal. And with Arsene Wenger gone, Perez could get a new start under a manager who will surely be familiar with his work from Spain.

Last year: Wojciech Szczesny. Arsenal appearances in 2017/18: None. He joined Juventus and is now a Serie A title winner.

Bournemouth – Aaron Ramsdale (Chesterfield)
“It will be really interesting to see how he develops from afar because we really do believe he could be a great goalkeeper,” said Cherries boss Eddie Howe when he sent Aaron Ramsdale to the Spireites in January. It was a real baptism of fire as Chesterfield were relegated out of the Football League, but Ramsdale’s career is very much on track; he will go to the Toulon tournament with England’s Under-21s this summer and then hope for a game or two at Bournemouth. The bad news is that Artur Boruc has signed a new contract.

Last year: Emerson Hyndman. Bournemouth appearances in 2017/18: Three. He did at least play almost an hour on the final day of the season v Burnley.

Brighton – Mathias Normann (Molde)
The Norwegian Under-21 is currently on loan at Ole Gunnar Solskjaer’s Molde in Norway after joining Brighton last summer. “He showed what level he holds in periods last year, so we are looking forward to seeing him in Molde,” said Solskjaer, who saw the midfielder’s pre-Christmas loan ruined by injury. And then back to Brighton to bolster Chris Hughton’s squad, perhaps?

Burnley – N/A
Burnley have already shed both Tom Anderson and Chris Long so there will be no returning loanees looking for a Europa League place.

Last year: Aiden O’Neill. Burnley appearances in 2017/18: None. Though he did make a couple of Burnley benches after returning from Fleetwood on loan.

Cardiff City – Lee Tomlin (Nottingham Forest)
Neil Warnock described him as the player who has “the most ability” at Cardiff. It’s just a shame that he also has the most stomach. He has been on loan at Nottingham Forest (and scored a handful of goals) but can he get fit for a possible last crack at the Premier League? Probably not and you can join us here again next year to laugh at the very idea.

Chelsea – Ruben Loftus-Cheek (Crystal Palace)
To be fair, there’s a bloody lot of competition, with Michy Batshuayi and Kurt Zouma being among a whole host of players who will return to Chelsea this summer after temporary moves. In the case of Loftus-Cheek, he will first go to the World Cup with England. And then – if there’s any justice in this world – he will replace Danny Drinkwater in the Chelsea squad.

He should be given a serious chance at Chelsea next season! pic.twitter.com/MPRP7J0Roz

Crystal Palace – N/A
Let’s not pretend that Sullay Kaikai is going to make it into what is already a pretty big Crystal Palace squad.

Last year: Jonny Williams. Crystal Palace appearances in 2017/18: None. He went on loan to Sunderland. It did not go well.

Everton –  Ademola Lookman (RB Leipzig)
Fancy advising a young English player not to join a top-six Bundesliga side on loan and to move to Championship side Derby instead. Thankfully for Ademola Lookman, Sam Allardyce has now departed and the new manager is far more likely to appreciate an England Under-21 international who scored five goals in 11 Bundesliga games. Come home, Ademola.

Last year: Gerard Deulofeu. Everton appearances in 2017/18: None. He moved back to Barcelona, who gave him a second La Liga winner’s medal even though he ended the season on loan at Watford.

Huddersfield Town – Jordy Hiwula (Fleetwood Town)
The Terriers took up the option of extending the 23-year-old striker’s contract after a season in which he scored 13 goals. Could he be a useful squad member next season? Probably not, judging by the records of our picks from last season.

Leicester – Nampalys Mendy (Nice)
“If he comes back at a good level, he can be an important player,” said Leicester manager Claude Puel, who will surely remember the excellent Nice midfielder whose form prompted Leicester to pay £13m for his services too summers ago. The bad news is that he has started only 11 Ligue Un games this season so dislodging Wilfred Ndidi from the Leicester team sounds unlikely.

Last year: Tom Lawrence. Leicester appearances in 2017/18: None. He moved to Derby County for £5m.

Liverpool – Harry Wilson (Hull City)
There are more high-profile players out on loan from Liverpool – Divock Origi, Daniel Sturridge and Lazar Markovic – but let’s not pretend they are about to walk back into Jurgen Klopp’s Champions League squad. One player who does have a chance is Wilson, who scored seven goals in 13 Championship games from the wing for Hull and could be valuable back-up for Liverpool’s front three.

Last year: Jon Flanagan. Liverpool appearances in 2017/18: None. He was then found guilty of assaulting his girlfriend and was sent on loan to Bolton.

Manchester City – Manu Garcia (NAC Breda)
Roma, Valencia, Sevilla and Villarreal are all said to be interested in the former Spain Under-19 international after his impressive season in the Netherlands. Could he make it back at City? It’s certainly more likely than Eliaquim Mangala, Joe Hart or Patrick Roberts being welcomed with open arms and a shirt number.

Last year: Pablo Maffeo. Man City appearances in 2017/18: None. He went back to Girona and was almost ever-present in La Liga. He has now made a permanent move to Stuttgart.

Manchester United – Andreas Pereira (Valencia)
Went on loan to Valencia against the advice of Jose Mourinho and got better and better in absentia as United fans pined for a player many of them had never seen. He started the season strongly in Spain but never really recovered from Achilles problems that kept him out for six weeks. Along with Timothy Fosu-Mensah, he should be a squad player next season.

Newcastle – N/A
The last thing Rafa Benitez wants is to welcome back players currently draining the club of wages like Aleksandar Mitrovic, Jack Colback and Henri Saivet. And Rolando Aarons (on loan at Hellas Verona) surely has no Newcastle future after he was convicted of affray for a bar brawl involving his mum.

Southampton – Harrison Reed (Norwich City)
Harrison Reed is loved in Norwich after a brilliant season both in midfield and then at right-back, but if anybody would give a Premier League chance to a tough-tackling Championship-level midfielder it is surely Mark Hughes. Certainly, he has more chance of being welcomed back with open arms than Jordy Clasie.

Last year: Sam Gallagher. Southampton appearances in 2017/18: None. He joined Birmingham City on loan for the season.

Tottenham – Cameron Carter-Vickers (Ipswich Town)
“It would be great if I could get some minutes in the new stadium, but for now I have to focus on working hard and continuing to give my all,” said US international Cameron Carter-Vickers, handed a new contract last week. With Toby Alderweireld set to depart, there could be more centre-half minutes available.

Last year: Will Miller. Tottenham appearances in 2017/18: None. He joined Burton Albion on a permanent deal last summer.

Watford – Cucho
Barcelona are said to be interested after the Colombian scored 16 goals in 33 games for Huesca in the second flight of Spanish football, so Watford may have to make a decision this summer. Do they accept £20m for the teenager, loan him out again or battle to obtain a work permit for an uncapped footballer?

West Ham – Reece Oxford (Borussia Mönchengladbach)
Borussia Monchengladbach were reportedly ‘weary’ about getting involved in negotiations with West Ham, even though they would very much like to sign the young English defensive midfielder on a permanent deal this summer after two loan spells. It seems the Hammers don’t know what to do with Oxford but are wary of letting him go on the cheap. Perhaps new manager Manuel Pellegrini can kickstart a career that has never quite got off the ground.

Wolves – N/A
Oh come on. If you don’t want them in the Championship…