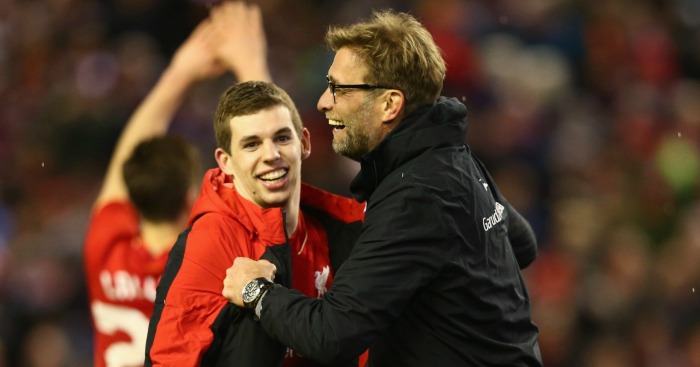 This list will include only players who will return to their parent clubs this summer, not those who headed back in the winter. Here’s to you, Nathan Ake.

Arsenal – Wojciech Szczesny (Roma)
There are arguments to be put forward in the cases of Calum Chambers and Jack Wilshere. Heck, even Joel Campbell could feel aggrieved. But a standout season for Wojciech Szczesny in Roma is likely to lead to his re-emergence at Arsenal. He might not dislodge Petr Cech as No 1, but with David Opsina’s future increasingly uncertain, he could be described as a ‘shock starter’ in next season’s FA Cup and Europa League finals despite Arsene Wenger’s public preference for having a league keeper and a cup keeper in one campaign.

Bournemouth – Emerson Hyndman (Rangers)
Despite only moving north in January, midfielder Emerson Hyndman was named Rangers’ Young Player of the Season last month. The 21-year-old scored four goals and assisted a further two in 13 Scottish Premiership appearances, and Eddie Howe has already dismissed rumours of a permanent move to Ibrox or Celtic.

Brighton – Rob Hunt (Oldham)
Will Rob Hunt suddenly become Brighton’s first-choice right-back after his first half-season playing in the Football League with Oldham? No. No he will not. But after excelling in the second half of the season with the League One side, might Chris Hughton consider keeping the 21-year-old on board to improve his squad options? Perhaps.

Burnley – Aiden O’Neill (Oldham)
Having made three appearances in Burnley’s first eight Premier League games of the season, Aiden O’Neill will already be on the radar of Sean Dyche. The 18-year-old enjoyed a positive four months at League One Oldham thereafter, and Dyche has already stated that the midfielder “is someone who should definitely be around our first-team squad”.

Chelsea – Andreas Christensen (Borussia Monchengladbach)
Considering Chelsea loaned out 38 players this season, it is a little difficult to stand out from that particular crowd. But with the Blues needing not only more options but a little more youth in central defence, Andreas Christensen will surely feature in the first team. He has Champions League and top-flight experience after spending two years in Germany, and is still only 21. His agent and father has already said that Antonio Conte wants him back.

Andreas Christensen really is the litmus test of the whole loan system this summer. He fulfils every criteria CFC look for in a signing.

Crystal Palace – Jonny Williams (Ipswich)
The incoming manager at Selhurst Park, whomever that may be, should expect no gifts in the form of hidden gems returning from loan. Keshi Anderson (Northampton) will not rip up the Premier League next season, while Jordon Mutch (Reading) is not quite of the requisite standard. So our tip goes to Jonny Williams because it is astonishing that he is still just 23.

Everton – Gerard Deulofeu (AC Milan)
It seems strange to think that Gerard Deulofeu is still an Everton player, such is the nature of his relationship with the Toffees. He failed to score or assist a single goal in 11 Premier League games this season, before leaving for AC Milan in January. His performances in Italy have earned rave reviews, and could persuade his permanent manager to give him a second chance.

Leicester – Tom Lawrence (Ipswich)
Newcastle are reported to have identified Tom Lawrence as a transfer target upon their return to the Premier League, such has been his impact on loan at Ipswich. Nine goals and 11 assists in 34 games in a struggling Championship team could persuade Leicester to hang on to the 23-year-old.

Liverpool – Jon Flanagan (Burnley)
Few clubs can boast two more valuable loanees, yet something tells us that Jurgen Klopp’s relationships with Mamadou Sakho and Lazar Markovic are beyond repair at Liverpool. Jon Flanagan will not return from his ill-fated spell at Burnley as a first teamer to replace either Nathaniel Clyne or James Milner, but he could prove to be a valuable squad option.

I love this picture of Jon Flanagan and Cafu. pic.twitter.com/GuqD6f9Xq3

Newcastle – Kevin Mbabu (BSC Young Boys)
If Rafael Benitez won a Champions League with Djimi Traore at left-back, the possibilities are rife with Kevin Mbabu. He shone on his full Premier League debut against champions Chelsea in September 2015 in that position, and although he is a right-back by trade, he can provide some squad depth in defence. It’s a better idea than keeping Siem de Jong and hoping he doesn’t break.

Southampton – Sam Gallagher (Blackburn)
Recent reports state that Southampton value striker Sam Gallagher at £7m. The 21-year-old scored 11 goals on loan at Blackburn this season, but could not rescue the former Premier League champions from relegation to the third tier. He won’t suddenly become a regular starter at St Mary’s, but he might have earned an opportunity to prove himself.

Stoke – Bojan (Mainz)
“My position is clear. I want him to stay,” said Mark Hughes of Bojan in December, before adding that “I want to give him more games between now and the end of the season.” By January, he claimed that the striker was “a long-term option here”. By February, he had been loaned out to Mainz, where he started just eight games of a possible 16. Why won’t anyone just love Bojan?

The Stoke faithful have a thought for returning fans' favourite, @bokrkic, in their last game of the season. pic.twitter.com/2mQHxN5D5T

Swansea – Kyle Bartley (Leeds)
After being loaned out by Francesco Guidolin and not even being treated to the tender Americanness of Robert Bradley, Kyle Bartley will receive his opportunity under Paul Clement. The manager has made it expressly clear that the centre-half, who actually became Leeds captain during the season, such was his impact, has a future at the Liberty Stadium.

Tottenham – Will Miller (Burton)
Mauricio Pochettino has made no secret of his preference to keep young players at White Hart Lane to oversee their development and ensure they learn his style of play even in the youth teams. After a campaign out on loan at Burton, Will Miller could benefit from the manager’s watchful eye. He even made an appearance in their weird post-season friendly in Hong Kong.

Watford – Mario Suarez (Valencia)
With continuing issues over attaining a work permit for Venezuelan Adalberto Penaranda, Mario Suarez is the Watford loanee most likely to improve this squad if he stays this summer. The midfielder was deemed surplus to requirements by Walter Mazzarri, but new manager Marco Silva might deem the 30-year-old’s experience invaluable.

West Brom – N/A
Let’s not pretend that Tony Pulis will have seen Andre Wright’s performances for Yeovil or Tyler Roberts’ showings for Shrewsbury and decided that he should give these young players a chance at The Hawthorns. The only other choices are Tahvon Campbell (Notts County) and Sebastien Pocognoli (Brighton), neither of whom are towering centre-halves.

West Ham – Reece Oxford (Reading)
Since shackling Mesut Ozil in his Premier League debut aged just 16 in August 2015, Reece Oxford has started just seven more games in the West Ham first team. Five of those came in Europa League qualifiers for which the Hammers were dreadfully under-prepared. He has played a minimal part in Reading’s charge to the Championship play-off final, but would surely be of more use at London Stadium next season, even just as a squad member.