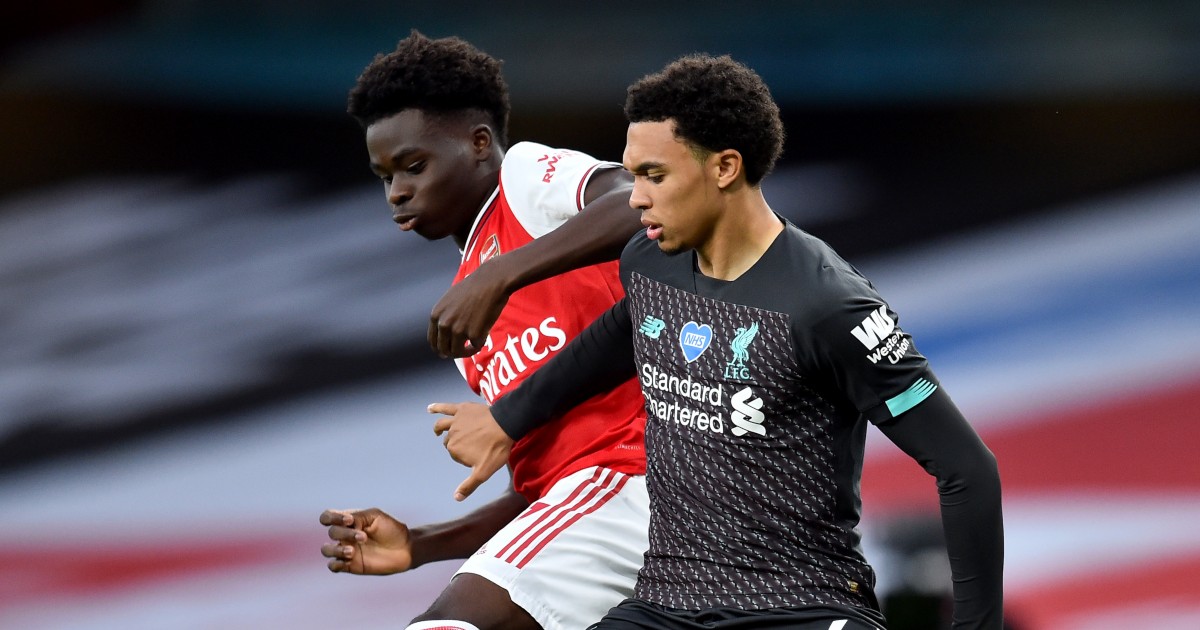 Jacob Ramsey’s stunning goal for Aston Villa this week confirmed he’s taken on the mantle of Aston Villa’s officially designated One Of Our Own after the summer departure of Jack Grealish. So who holds the role at all the other Premier League clubs, then? Well, we’ll tell you if you just shut up for a minute.

No real hard and fast rules with this one – some pretty outlandish and overt cheating at points if we’re honest – but we’ve tried our best to keep it to people who best fulfil the following suitably vague criteria: local lads, at least some time in the academy or youth set-up, significant first-team impact and ideally no games of professional club football for any other team apart from loans.

Arsenal – Bukayo Saka
A lot of the time you embark on these one-per-club ideas and then realise you’re struggling at the very first hurdle with Arsenal resolutely refusing to play ball. No such problems here, though, with the only decision to make whether to plump for Saka or Emile Smith Rowe. Smith Rowe is having the sparklier season currently, but it’s surely Saka who gets the nod overall. Already of staggering importance to Arsenal and a key member of the full England squad despite still being a teenager when the season started. Already has over 100 first-team appearances for the Gunners and has made them at left-back, centre-forward and just about everywhere else in between.

Aston Villa – Jacob Ramsey
The One Of Our Own is dead, long live the One Of Our Own. In Jack Grealish, Villa had one of the very One Of Our Ownest players in the whole One Of Our Own canon. Genuine local lad, genuine fan of the club, genuinely great player. He’s gone now, though, but Villa have an heir after Birmingham-born 20-year-old academy graduate Jacob Ramsey scored that goal against Norwich. He has some big boots and tiny shin pads to fill.

Brentford – Marcus Forss
The Finnish lad who came through West Brom’s youth system? That Marcus Forss? Yes, him. It’s the best we can do to find the middle of a Venn diagram containing ‘First-team minutes’ and ‘Some time in the Brentford set-up’. When there is literally not one member of your first-team squad who was at the club before 2016, this is what happens. Longest-serving player Rico Henry is probably the actual closest thing to a One Of Their Own, having been a regular for two seasons in the Championship and remaining so into the Premier League, but come on. The guy played 57 games for Walsall, for goodness sake.

Brighton – Solly March
May have dallied with Lewes’ youth system and been born in Brighton’s bitter local rival seaside town Eastbourne, but there can surely be no doubt about his One Of Our Ownness now. He’s never even been out on loan while racking up over 200 Brighton appearances since making his debut as a teenager in August 2013.

Burnley – Dwight McNeil
Joined from Manchester United as a 14-year-old and since making his debut as a late substitute on the final day of the 2017/18 season has been pretty much unrivalled in the often challenging role of Burnley’s Exciting Player. Until Maxwel Cornet rocked up, that is.

Chelsea – Mason Mount
Plenty of high-calibre academy lads knocking around the Chelsea squad as there always tends to be, but a clear winner in Mount. Not only has he had the most impact at first-team level – although Reece James could yet have something to say on that in years to come – but he also has the most quintessentially Chelsea career imaginable, with even his time technically away from the club only further establishing his OOOO credentials via stints on loan at Vitesse Arnhem and Super Frank Lampard’s Derby.

Crystal Palace – Wilfried Zaha
What’s better than One Of Your Own? A One Of Your Own who finds his way back home after setting off to find fame and fortune elsewhere. He’s learned that lesson. He knows the grass isn’t always greener. There’s a contentment to it. A sense of peace. Lovely.

Wilfried Zaha. One of our own. pic.twitter.com/tTU7cpVhC5

Everton – Tom Davies
Born in Liverpool and has never played a single game of professional club football for anyone other than Everton Football Club. What with that and his hair and his socks and his fondness for taking New York Fashion week by storm, he’s got everything covered. We just really, really, really wish he was better at football.

Leeds – Kalvin Phillips
This is the good stuff. Local lad, made his debut while still a teenager and scored his first goal a week later in the 2014/15 season, a year when Leeds finished 15th in the Championship. Has grown into an absolutely integral player for club and country, a major factor in Leeds’ long-awaited return to the Premier League and their impressive first year back in the big leagues.

Leicester – Harvey Barnes
Only his Lancashire birthplace stops Barnes having a One Of Our Own full house, really. Exactly the right kind of player, too. You really want a One Of Our Own to be an attacking intent merchant rather than some reliable but dull right-back.

Liverpool – Trent Alexander-Arnold
But a OOOO can absolutely be a right-back if they’re excitingly, thrillingly brilliant enough and have bantered Barcelona off enough in Champions League semi-finals and have been treated unfairly by the national team to create an even greater desire among an already smitten fanbase to embrace and adore him even more than they already did. He’s not the best right-back in the world, but he might well be the best footballer who plays at right-back in the world.

Manchester City – Phil Foden
It’s pretty crazy really that right there among all the megabucks superstars City have signed to build one of the world’s greatest squads is an academy lad from Stockport who might end up better than the lot of them.
Manchester United – Marcus Rashford
Closing on 300 games for Manchester United and nearing 50 for England while also being the leader of the opposition and a national treasure and doing all that before the age of 25. He’s one of United’s own, no doubt about that, but in a way you also feel he belongs to the nation. He’s one of all our own.

Newcastle – Sean Longstaff
And soon they won’t even have that. Wonder if the Newcastle fans donning headdresses and celebrating the arrival of their new Saudi overlords stopped for even a second to consider the potential damage to OOOO narratives that a whole new squad of world-beaters could cause.

Norwich – Todd Cantwell
Born 15 miles along the A47 from Norwich in the market town of Dereham, known locally as ‘the Heart of Norfolk’, home to 18,609 souls according to the 2011 census, market days are Tuesdays and Fridays, and – important, this – it is not to be confused with the village of West Dereham which is some 25 miles away. Cantwell, meanwhile, has already twice celebrated helping the Canaries back into the Premier League and is currently mainly watching from the sidelines as a second relegation back into the Championship is slowly inked on to the old CV there, and all before turning 24. In purely football terms there’s probably a stronger case for Max Aarons, but he was born in London and besides, we’ve spent six minutes looking at Dereham’s Wikipedia page now and we’re not about to have that all be for nought.

Southampton – James Ward-Prowse
It’s over a decade now since Ward-Prowse made his Southampton debut at right-back in a League Cup last-16 defeat to Crystal Palace. Ten years and 300-odd games later he is no longer a right-back but one of the most solid one-club men in the game, while his set-piece prowess is almost but sort of not quite really an argument for nominative determinism.

Tottenham – Harry Kane
It really is truly incredible in modern football to witness a player emerge from a big club’s academy and then, via some early struggles and time spent away learning his trade on loan at Norwich, blossoming to become one of the very best in the world at what he does. And yet still it isn’t enough to get Oliver Skipp over the line here.

Watford – N/A
Gah, as if we’ve made it all the way to the Ws with only some minor rule-breaking only to run aground at the (almost) last. No academy lads in the Watford squad. The closest we can get is Craig Cathcart because he’s been there the longest but let’s not kid ourselves.

West Ham – Mark Noble
You can probably already make a decent case for Declan Rice and in time it may become an unanswerable one if he sticks around given his dalliance with Chelsea’s youth system happened so very early on in his formative years. But really, you can’t look beyond Mr West Ham himself. Time is running short but for as long as he’s there he’s the answer here. A man so relentlessly West Ham that he hasn’t even sullied the purity of it by muddying the waters and playing some games for England. It’s West Ham or nothing (or a handful of loan appearances for Hull and Ipswich) for Noble who made his debut for the Hammers almost 17 years ago when they were still in the Championship. He might just sneak past 500 league appearances for West Ham before knocking it on the head – he’s already clear of 400 Premier League games for the club.

Wolves – N/A
It really is feast or famine for Ones Of Our Own once you get to the Ws, eh? Conor Coady is the longest-serving player and in many ways fits the bill given the length and quality of his service to the club. But come on – he’s played 100 games for clubs that are not Wolves, and not while out on loan either.