Home F365 Features One per club: The exhaustive list of the exhausted… 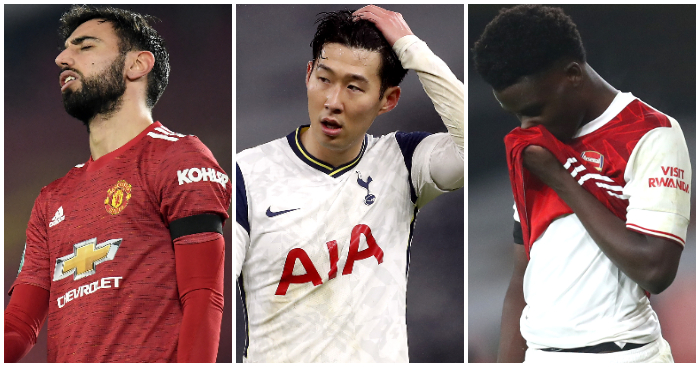 Lots of weary looking footballers knocking about the Premier League right now. Some recent games have been, for want of a better word, absolute turds. It’s likely to get worse. This feature could in a great many cases in fact be a five or six or seven per club, but we’ve limited ourselves to just one poor knackered fella at each club who just needs a bit of a breather before cracking on with the never-ending parade of football.

Arsenal – Bukayo Saka
A teenager being any Premier League team’s busiest outfield player is a bit mad, isn’t it? For one of the now-admittedly-scare-quoted “Big Six” it’s low-key one of the wildest things in this wild season. Brilliant as he is, it’s a heck of a job for a 19-year-old. Saka went past Kieran Tierney’s total minutes for the season in the drab goalless draw against Palace on Thursday night, and if Tierney’s absence is any kind of lengthy one it further limits the chance of any rest for Saka. He’s been operating from the right recently, but given Arsenal’s chronic lack of creativity sans Tierney it may be necessary to switch Saka back over to the left to provide some kind of… something.

Arteta: ‘Fatigue’ an issue for Arsenal against Palace

Aston Villa – Ollie Watkins
Six goals in his first seven Premier League games and none in his subsequent eight is a bit too on the nose really. Villa have no other strikers but do have to keep postponing games, so Watkins is getting his rest and it is in no way just storing up problems down the line because of the aforementioned total absence of other strikers and ensuing fixture pile-up.

Burnley – Josh Brownhill
Has played the full 90 minutes in 15 of Burnley’s 16 Premier League games so far this season. They lost the other one 5-0. Won’t make that mistake again. No rest for Josh.

Chelsea – Timo Werner
Only Kurt Zouma has played more minutes for Chelsea than uberflop Timo Werner, who has started 16 of Chelsea’s 17 Premier League games and came off the bench in the other. His goal against Morecambe ended a 12-game goal drought. Scored four goals in his first eight Premier League games and none in his subsequent nine, which when set against Watkins’ Villa stats proves conclusively that moving to the Premier League from the Bundesliga is precisely the same as moving from the Championship. That’s science is that.

Crystal Palace – Cheikhou Kouyate
If anything, Clive, he’s converted to being a centre-back almost too well. He’s now utterly indispensable: in the grand total of 27 minutes of Premier League football he’s missed, Palace conceded three goals. Full disclosure: they conceded four in the previous 63. It was the Liverpool game, see. Anyway, another example of the obvious correlation between the players who need a rest being by definition the players least likely to ever be allowed to get it.

Everton – Dominic Calvert-Lewin
Not as extreme as your Watkinses or your Werners, but there’s still been a marked tailing off in Calvert-Lewin’s productivity as this energy-sapping season rumbles ever onwards. One goal in his last seven Premier League games (10 goals in his first nine) before succumbing to a hamstring injury that kept him out of the FA Cup game against Rotherham and league trip to Wolves. Hopefully he won’t now get too long a rest.

Fulham – Antonee Robinson
Truthfully, it’s nobody. Fulham haven’t over-extended anyone yet compared to most clubs – not one player has over 1500 minutes. And their results over the last couple of months suggest that they are relatively less knackered than everyone else. So what to do? Just put the player whose played the most minutes? Yes.

Leeds – Stuart Dallas and Luke Ayling
They both play pretty much all the football. They’re both 29. It seems unreasonable to separate them.

Leicester – James Justin
One of a handful of players to tick over 2000 minutes for a Premier League club this season, and he’s done it playing out of position as well. Although once you’ve played 2000 minutes out of position in half a season you do start to raise a philosophical point about whether that can still be considered out of position. Hopefully, Justin will be given some sort of chance to ponder that teaser from the substitutes’ bench at some point soon.

Liverpool – Andrew Robertson
Yet to miss a single minute of Premier League football. Like Justin, a 2000-minuter. Unlike Justin, no philosophical debates to be had about his position. He’s a left-back. A good left-back. Really good. May also have already had his rest sitting on the bench against Villa’s kids.

Manchester City – Raheem Sterling
Hasn’t played the most minutes for City by any stretch this season, but does look way short of his best. Just seems to be having a very odd season. Four Premier League goals in 15 games is far too meh for Sterling’s standards, and the impression of someone in need of a proper break certainly wasn’t quashed by the sight of him stepping off the bench against Brighton in midweek and promptly twatting a penalty into the stratosphere.

Manchester United – Bruno Fernandes
One of four United players already past the 2000-minute mark. You can make a decent case for any of them. Especially Harry Maguire, but especially Bruno Fernandes. Problem is that even while looking really quite knackered he’s contributed four goals and three assists in his last five Premier League games. Just work through it, Bruno. Second wind any minute.

Bruno Fernandes is our Premier League player of 2020

Newcastle – Callum Wilson
Six goals in his first seven Premier League games for Newcastle, two in his subsequent eight. We’re calling it Watkins-Werner-Calvert-Lewin-Wilson Syndrome and are currently planning our first fundraiser. Give generously.

Sheffield United – Chris Basham
Just putting the outfield player with the most minutes here, yeah? Yeah. None of them need a rest right now, not when they’ve got the buzz of back-to-back wins coursing through their veins.

Southampton – JWP & KWP
James Ward-Prowse and Kyle Walker-Peters have both played every Premier League minute but this is a club that can’t even be bothered to have played its FA Cup third-round game yet. Can’t see why any of them should be getting a rest. Lazy.

Tottenham – Heung-min Son
Pierre-Emile Hojbjerg and Harry Kane are both in the 2000-minute club but Hojbjerg is a Viking and Kane always plays all of the football and gets his rests when the inevitable ankle injury comes along. Kane has also, this season more than ever, outsourced a large part of his running to Son. There’s no scam here – Son has been well remunerated for his endeavours with assist after assist after delicious assist. But he does now look knackered. Fulham on Wednesday night was probably his worst performance of the season, with a couple of opportunities missed including an eye-catchingly uncharacteristic and pivotal one-on-one scuffed into the post just before the equaliser.

West Brom – Semi Ajayi
On the bench for a goalless draw against Burnley back in October but ever-present in the Premier League before and since. Frankly the whole defence looks dazed and confused. Some kind of collective hallucination brought on by extreme fatigue is the only possible way to explain a defence that has conceded 12 goals in its last three home games, interspersed with a pair of heroic and incongruous 1-1 draws at Anfield and the Etihad.

West Ham – Declan Rice
Can’t say he isn’t squeezing as much football in for West Ham as he possibly can before what looks like an increasingly inevitable move to bigger and better things. Hasn’t missed a single minute of Premier League football this season, which is plain nutty for a midfielder.