Home Wolves One per club: Premier League opening-day starters who shouldn’t get too comfy 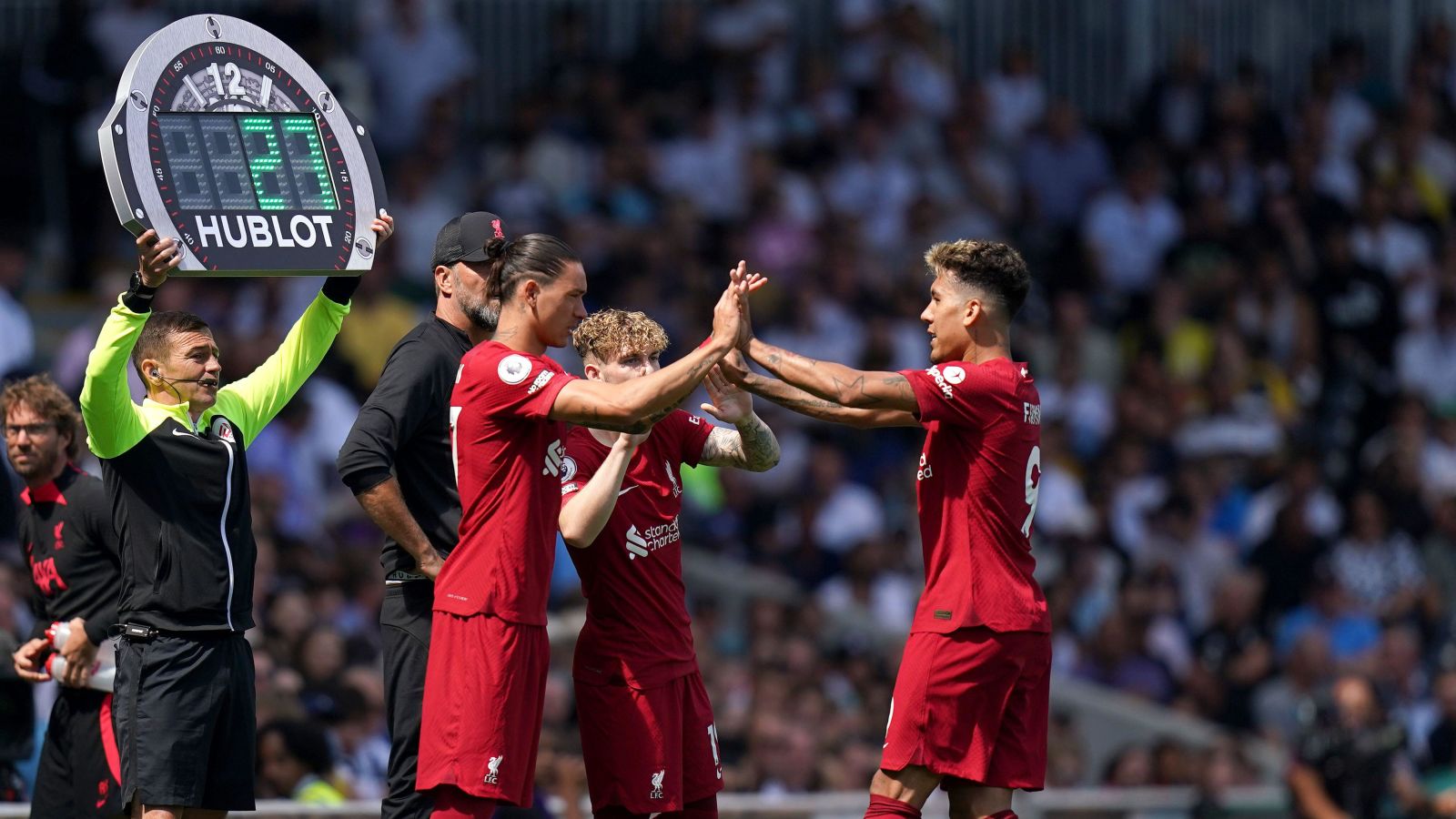 Not many teams get to pick their strongest possible side on the opening weekend of the season, not least this year because there was still almost a month of transfer window left at the time.

But with summer injuries and lingering suspensions and match readiness all factors, which players secured starting berths at the weekend but might be advised not to get too used to that situation?

Handily there was (almost) exactly one such player for each Premier League club which is useful given the premise of the feature.

Arsenal – Ben White
Certainly not about to find himself out in the cold, but William Saliba turning out to be just as good in England as he was in France means someone has to miss out. White was utilised at right-back against Palace, but with Takehiro Tomiyasu back in the squad after injury it could well be the England defender who finds himself odd man out in Mikel Arteta’s first-choice XI.

Aston Villa – Steven Gerrard
Yeah. Look at us, bending our own rules to dramatic effect almost straight away. We are so dangerous and exciting. Unlike Villa, who are just a bit shit. Seriously, though, signing a load of 30-year-olds on big wages with the obvious intention of being immediately good enough to catch Liverpool’s eye is really not working out well for Gerrard, whose expensively assembled Villa side is starting to look like a right mess.

Nobody really believed him when he said Villa weren’t a stepping stone, but the obvious job he understandably craves looks a long way off at the moment.

Brentford – Rico Henry
This one is rubbish, but there’s little scope for anything in Brentford’s line-up from the weekend. We’re clinging here to the idea that Brentford signing one of the most promising left-back/wing-backs in Europe to play him at right-back seems a bit mad, but at the same time that does seem to be very much the reality of what is happening. Aaron Hickey’s versatility and Brentford’s terminal lack of current alternatives in that position means that Henry probably hangs on to the left-back spot by default.

This should have been N/A really, but a) that’s a coward’s way out and b) we don’t want to play our N/A joker before we get to Brentford’s opponents from the opening weekend.

Bournemouth – Mark Travers
Scott Parker had a wafer-thin squad to choose from on Saturday, making the 2-0 victory over Villa all the more impressive. A few of the opening-day heroes are under threat, though. Adam Smith surely makes way for a fit Ryan Fredericks at right wing-back, Lewis Cook will start over Ben Pearson and, perhaps most unfortunate of all given his key role in the promotion campaign, Travers will almost certainly find himself on the bench once Neto has settled in after his move from Barcelona.

As an aside, is Neto in nets the most pleasing goalkeeper name since Kepa the keeper?

Brighton – Solly March
Solly March is a solid squad player who has rarely if ever let Brighton down – up to and including Sunday’s 2-1 win at Manchester United – but he is not as good a right-wing-back as Tariq Lamptey and that’s that, really.

Chelsea – Ben Chilwell
Clearly none of Chelsea’s starting XI at Everton appears likely to be bombed right out of contention any time soon given it was a team comprised entirely of established performers and big new signings, but the most conspicuous presence on the bench was obviously Marc Cucurella which sort of makes Chilwell the answer here by default.

Crystal Palace – Vicente Guaita
New signing Sam Johnstone’s leg knack will heal and Guaita will be back on the bench.

Everton – Demarai Gray
Would have been easier all round if Frank Lampard had stuck to his guns and picked former footballer Dele Alli from the start as not so much a false nine as an outright fake one. Instead he opted for Anthony Gordon as the most nominal of strikers in the 1-0 defeat to Chelsea.

Still, though, there is only a minimal chance that a front three of Gordon plus Demarai Gray and new boy Dwight McNeil has any long-term future even for Everton. Dominic Calvert-Lewin or if times get desperate Any Other Striker will be back soon and one of that front three has to miss out. We don’t think it’s Gordon and reckon the new boy will get first crack over Gray, rightly or wrongly.

There’s also going to be someone unhappy in defence with Conor Coady coming in but looking at Everton’s defenders for any length of time just makes us too sad to even continue with this whole caper.

Fulham – Marek Rodak
Don’t want to make this feature too keeper-heavy but at the same time there’s no great need to overcomplicate things and it’s reasonable to assume Bernd Leno’s masterplan doesn’t involve swapping the Arsenal bench for Fulham’s.

That cracking 2-2 draw with Liverpool may end up as a Rodak moment. Reference for the kids, there. Who remembers proper cameras, eh? Look at his face, he doesn’t remember cameras! He’s too young! Going into Boots or Snappy Snaps to get your film developed! You only had 24 photos, couldn’t waste them on pictures of your avocado-based brunch! Who remembers white dog dirt? Eh? You sir, you look like you remember white dog dirt!

Leeds
We might still need that Leicester N/A just before we get there. Curse you, alphabetical norms. Let’s go for Pascal Struijk who will surely play a great deal of football this year but simply cannot be Jesse Marsch’s idea of a long-term plan at left-back.

Liverpool – Roberto Firmino
Darwin Nunez is already Making Things Happen from the bench for Liverpool; the next natural step of this, ahem, evolution of the Reds attack is for him to start doing it from the start ideally. Especially as Jurgen Klopp’s side are just developing a reputation for slow starts that make life needlessly difficult for themselves.

Manchester City – Erling Haaland
Absolute fraud. He’s going to get found out any minute now, just you wait. Can’t just waltz into this league and smack in goals for fun. This is the Premier League. Show some respect, you potty-mouthed yassified robot.

Manchester United – McFred
“Every bloody one of them” would be an only slightly OTT verdict on United’s opening day. There’s also a reasonable case that the player most under threat from that starting XI might actually be the captain. But at the most fundamental level it is surely the McFred midfield that simply cannot be the starting combination for a side with any sort of ambition. We hope you’ll allow us the cheat of selecting two players given it’s someway short of all 11. And if you don’t, well… tough. We’ve done it now.

Newcastle – Fabian Schar
Yes, lovely goal, very good, thanks very much, but Sven Botman is no benchwarmer and Dan Burn hasn’t missed a game since joining from Brighton.

Nottingham Forest – Sam Surridge
Taiwo Awoniyi replaced Surridge just past the hour at St James’ Park, and we’d expect that to be a more permanent change from the start of games going forward given his Bundesliga efforts last season and £18m fee.

Southampton – Oriol Romeu
Romeu started 34 games last season, but the eye-catching performance of 18-year-old former Manchester City starlet Romeo Lavia on debut was one of few bright spots for Southampton on a chastening opening day. Southampton have previous for trusting youth with excellent results and, with James Ward-Prowse a lock for one of the two remaining midfield berths, it could well be Romeu looking nervously at a bench containing Ibrahima Diallo and Stuart Armstrong.

Tottenham – Pierre-Emile Hojbjerg
Wildly difficult one, this, Antonio Conte backed the team that got him fourth for the opening-day spanking of Southampton, but with at least half that side on notice from shiny new signings and players returning from injury on the bench and Richarlison still to add to the mix after suspension. The likelihood is that all those who started Saturday’s game will still have significant roles to play in this busy season. The players deemed surplus to requirements are already out in the cold – your Reguilons, your Winkses, the Ndombeles of this world – and those selected for this squad are all in Conte’s circle of trust.

So who do we plump for? Let’s consider the runners and riders. Fair to say Fraser Forster probably isn’t usurping Hugo Lloris; Djed Spence is more of a long-term project and Emerson Royal is much improved; Ryan Sessegnon is doing well enough for Ivan Perisic’s introduction to English football to be gradual, allowing the Croatian to even be something of a European specialist early on; the front three are untouchable even when Richarlison is available; and Ben Davies remains ahead of loanee Clement Lenglet in the pecking order.

That leaves the midfield, where Yves Bissouma surely won’t be a substitute for long given his quality and Premier League experience. Hojbjerg is the most obviously at risk from Bissouma’s skillset, and we’ll go for him if only because even a season spent only playing most of the football would mark a significant change for a man who has grown accustomed to playing pretty much all of it.

West Ham – Ben Johnson
Because we reckon that even West Ham’s capacity for calamity is realistically unlikely to reduce them to one available centre-back for the entirety of the campaign.

Wolves – Hee-chan Hwang
It is entirely possible he might do enough over the coming weeks to retain his place even when the luckless Raul Jimenez returns from his latest injury setback. A record of one goal in his last 25 Premier League appearances for Wolves, though, suggests that he probably won’t.