Home Arsenal One per club: The academy players who got away 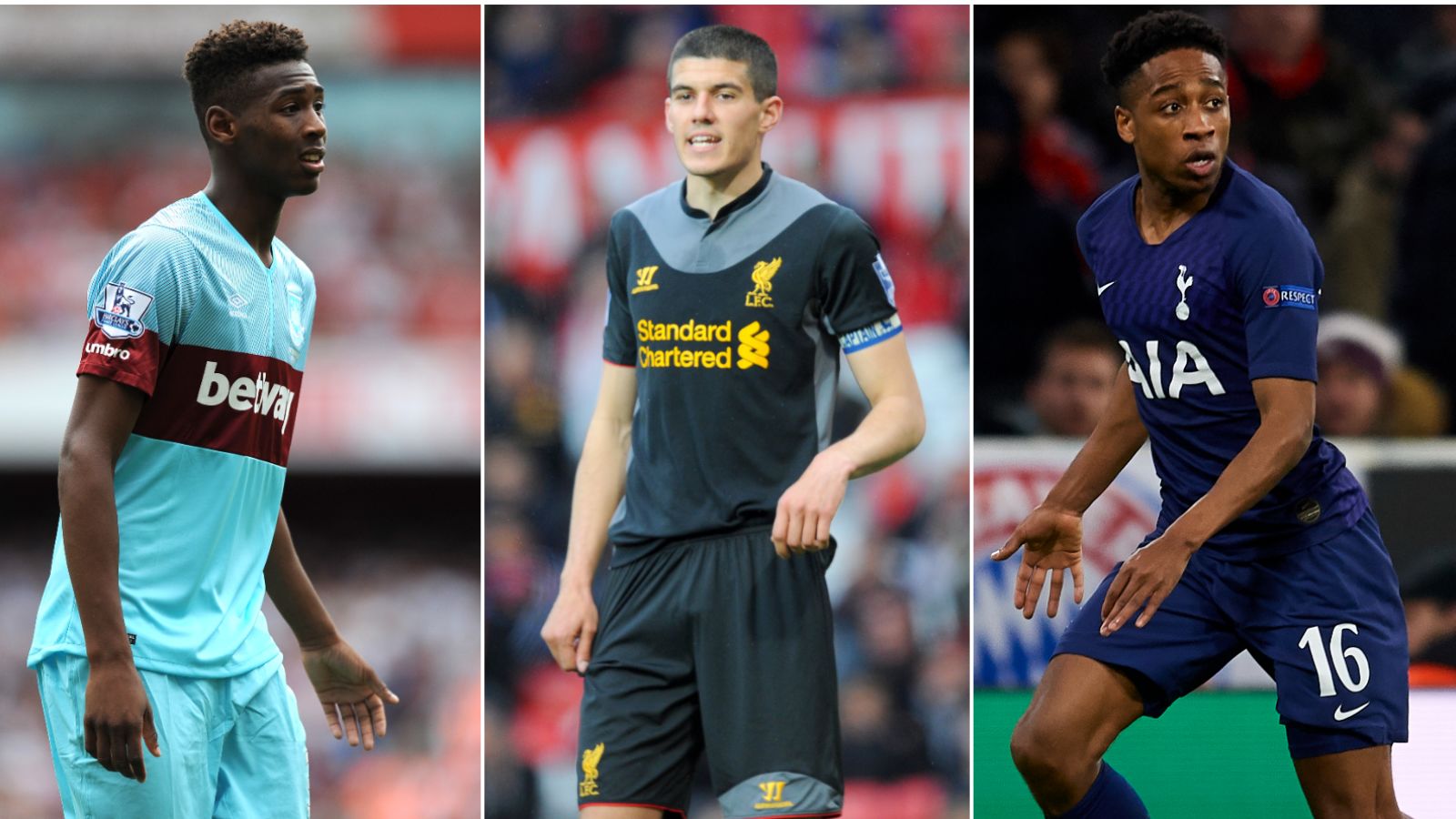 We’ve always been faintly baffled by, well pretty much everything, but in this specific instance Kyle Walker-Peters’ failure to get a proper chance at Spurs. He’s gone on to better things at Southampton and now is in the England squad, so we decided to have a look at other academy lads to go on and do well elsewhere. One for each Premier League club, as is customary.

Now we weren’t exactly sure how to qualify it but we didn’t want players who had great careers at their first clubs and then went on to even better things, so we’ve capped it at 15 Premier League appearances for their original club for reasons that will become self-justifying in due course. Other than it’s simple: the current active player with the highest market value as calculated by the hero-nerds at transfermarkt.co.uk without whom we would be forever lost.

That’s a good start, isn’t it? This goes rapidly downhill from here, I should warn you. Not all of these are going to be players who had famously disastrous loan spells at West Brom before going on to win the Champions League and multiple Bundesliga titles, just so you know.

Bloody hell, lads. Proof that even a club with a system and development plan as good and successful as Brentford can still drop a great big massive bollock when it comes to working out which 16-year-olds are going to be real good at football.

You’d have to say that in among everything else Bournemouth did on their absurd march through the Football League, spending £150,000 in 2012 on a central defender who would go on to play very nearly 400 games for the club – a good chunk of them in the top flight – over the course of the next decade was among the better bits of work.

Right, we’re annoyed with ourselves now for putting the appearances qualification in to stop your Grealishes, your Shaws – the Wan-Bissakas of this world – from getting in. Because it means we can’t have Kyle Lafferty here and we’d very much like to have Kyle Lafferty here. With all due respect to O’Neill and the A-League, this isn’t exactly one that got away, is it?

That’s a bit more like it, isn’t it? He’s one of the best players in the league! Probably fetch nine figures when he gets sold this summer! Chelsea, you fools! Now, is it fair to count a player Chelsea released at 14? Probably not. Are we going to do it anyway? Absolutely. Chelsea are fair game right now. They should just be grateful they still exist to be able to grumble about the rank unfairness of tinpot internet features, frankly. If you want a proper one, Fikayo Tomori only played 17 Premier League games for the Blues and we would definitely have eked out the qualification criteria to 20 games for that one if we’d been so minded.

Wan-Bissaka obviously doesn’t count thanks to the corner we’ve boxed ourselves into, so Woodman’s departure from Palace as a 16-year-old in 2013 is the one. You may laugh, but he’s played 222 more minutes of Premier League football this season than Eberechi Eze.

Often a figure of fun on this website but a) Everton could certainly have done with him this season and b) he is currently playing very well indeed having once again used his cheat code of “speaking all the languages” to ingratiate himself instantly with yet another new Tottenham manager.

Left Leeds for Hull at 16 and also had a couple of years at Blackburn (one on loan) before finding his home down in that there London. Leeds academy lads have amassed a vast number of Premier League appearances over the last 15 years or so, despite Leeds’ conspicuous absence from the top flight, thanks largely to the efforts of James Milner and Aaron Lennon who have close to 1000 appearances between them and are both still going strong.

Released at 18, Clucas took a circuitous route back to the top that included a season in the fourth tier of Spanish football before eventually taking him back to the top flight with first Hull and later Swansea. The most high-profile academy lad from Leicester currently elsewhere in the top flight would be Ben Chilwell, while a decent core of the current very good squad is homegrown. Your Barneses, your Thomases, the Dewsbury-Halls of this world.

This is a nice one. Coady’s entire Liverpool career comprised one Premier League minute against Fulham in May 2013 and an hour in midfield for a Europa League game against Anzhi. Now plays literally all the football for Wolves and has become a familiar presence in Gareth Southgate’s England squads. Even scores the odd goal these days, which is a fun development.

The ‘current player’ clause denies us any Ryan Giggs banter, but it matters not because, look, we’ve still got a left-winger who ended up at Manchester United. Doesn’t yet, admittedly, have quite the United CV that Giggs acquired, but there’s still time. Whisked away by those crafty Germans at Dortmund. Coming over here, taking our young footballers and turning them into excellent players. Let’s hope Brexit puts a stop to any more of that nonsense. We certainly don’t want any more Sanchos or Bellinghams on our hands.

One of those where the ‘Former’ prefix can probably be added to ‘England international’ but is he currently any more of a liability than Manchester United’s defence? It’s probably quite close, which should trouble absolutely everyone involved.

Oh, look at that. Exactly 15 Premier League appearances. Right on the cut-off. What are the chances? And it means we don’t have a second entry for Freddie Woodman, which would have been at least one and really two too many. How very convenient. As for Armstrong, he has finally this season worked his way back to the top flight and got his first Premier League goal having made 15 largely brief and always goalless appearances for the Magpies in 2014 and 2015.

A massive, massive cheat because he played pretty much the whole of the 2016/17 Championship season for Norwich, but he was at the club during a Premier League season in 2013/14 and never got a game so it counts because shut up. Probably get a Premier League winner’s medal next season if he can hang around at Newcastle.

Luke Shaw’s 60 Premier League games for Southampton obviously exclude him, but another big-sixer and member of England’s squad – albeit one who didn’t score in the Euros final – makes the nod. Ben White has done tidily since leaving the Saints at 16. Fair play.

Has spent most of his Southampton career looking like a far safer option than whichever loon has been shambling around at right-back for Spurs. In fairness, this was often the case during his confusingly unsuccessful Spurs career. It’s a shame that, because the idea of Kyle Walker’s long-term heir being called Kyle Walker-Peters still feels like it was a gag worth persisting with. Thanks to this week’s international call-up, though, the hope persists at England level even if Spurs ballsed it up.

Fifteen years old he was when Manchester City swooped in and plucked him away for a fee barely in six figures. You can be uncomfortable about the prevalence of that sort of practice, but also we’re quite relieved because this one was going to be a struggle otherwise.

Remember him? What happened there, then? Absolutely wild that a brilliant debut at 16 years old against Arsenal made up over a third of his entire Premier League minutes to date. Now 23 and doing very nicely for himself thank you very much in Germany. Will inevitably return to the Premier League before long, and we can already smell the long reads, oral histories and deep dives into that infamous day he had Mesut Ozil in his pocket while still a child.

Reece Oxford would have been a better one to finish on, wouldn’t it? Thanks a lot, Wolves. Thanks a lot, the alphabet. Pair of pricks.