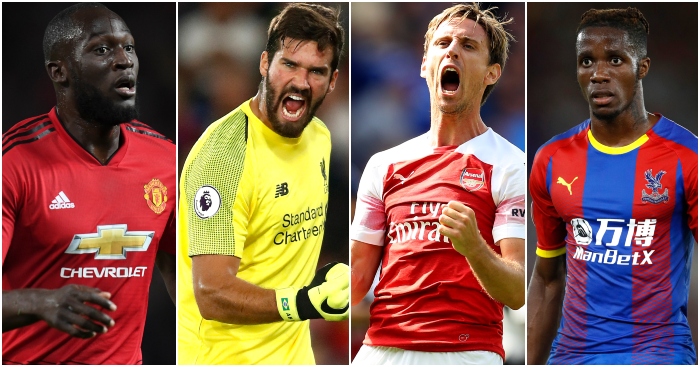 Arsenal: Nacho Monreal
According to erstwhile manager Arsene Wenger, the Spaniard is Arsenal’s “silent leader”. To new boss Unai Emery, Monreal is his only fit left-back, with Sead Kolasinac and Ainsley Maitland-Niles, who started the opening games of the season, both ruled out until next month.

Bournemouth: Ryan Fraser
The left-winger is on fire at the moment and his contribution has been a major factor in the Cherries’ impressive start. Fraser has scored four and assisted three goals in six matches this season. The Scotland international was 50-50 to make the Leicester game with a hamstring problem but with Junior Stanislas not quite ready, he and Eddie Howe took a “calculated risk”. It paid off, with Fraser bagging a brace and earning a penalty to beat the Foxes 4-2.

Brighton: Glenn Murray
Chris Hughton has spent £20million on centre-forwards this year but still Murray remains pivotal to the Seagulls. The 34-year-old has scored all but one of Brighton’s goals this season, having played every minute in the Premier League, while Jurgen Locadia and Florin Andone watch on from the bench and treatment table respectively. We are no closer to knowing whether either is capable of replicating Murray’s impact.

Burnley: James Tarkowski
Burnley’s success last season was built on the strong foundation provided by their centre-halves. Tarkowski and Ben Mee have been ever-presents once more and though the season has got off to a wretched start, it would have been even more miserable without the England international. Tarkowski has netted two of the three goals Burnley have scored and with new signing Ben Gibson seeking treatment for a groin problem, centre-half cover is thin on the ground.

Cardiff: Sean Morrison
The skipper was a huge factor in Cardiff’s Championship promotion campaign and the centre-half remains every bit as important back in the Premier League. Cardiff have shipped seven goals to Arsenal and Chelsea in the last two matches but clean sheets in two games against Newcastle and Huddersfield will be worth more to Neil Warnock come the end of the season. If the Bluebirds survive, it will be because of their defence. Yet Morrison has also led the way in attack, assisting two of Cardiff’s three goals.

Chelsea: Eden Hazard
Of course it’s Hazard. Jorginho has shown his importance to the way Maurizio Sarri wants to play and N’Golo Kane is N’Golo Kante. But Hazard is Chelsea’s match-winner in an attack that can otherwise look pedestrian and predictable.

Crystal Palace: Wilfried Zaha
The same applies to Zaha, though his importance is even more stark. The Ivorian has scored three of Palace’s four goals, while the one game he has missed ended in a 2-0 home defeat to Southampton – Saints’ only win of the season. God knows what Roy Hodgson would do without him, but the winger seems to fear we might find out soon if something doesn’t change…

Everton: Richarlison
Marco Silva has already had to make do without the one player who showed he could make a tangible difference. Richarlison had three goals in two and a half games before getting himself sent off at Bournemouth, since when the Toffees have failed to win. Everton have been wretched at the back so far, failing to keep a clean sheet, so they always have to score. That has become a hell of a lot more difficult without their most creative threat.

Fulham: Aleksandar Mitrovic
The centre-forward is the only Cottager to play every Premier League minute while scoring four goals in five matches. Minus Mitrovic, the only other viable option available to Slavisa Jokanovic is to move Andre Schurrle through the middle. And that’s just a big faff.

Huddersfield: Aaron Mooy
No goals, no assists but Mooy remains comfortably Town’s best and most in-form player. Not even two man-of-the-match performances in his last two games could help Huddersfield record their first win. Without the Australia international, Huddersfield would be in a big trouble – if they aren’t already.

Leicester: Ricardo Pereira
The right-back had a shocker at Bournemouth, where Ryan Fraser gave him nightmares on the few occasions he hadn’t been caught forward. But otherwise, Pereira has had an encouraging start to life in the Premier League and worryingly for Leicester, with Danny Simpson exiled by Claude Puel, the alternative at right-back is Daniel Amartey.

Liverpool: Alisson
If the Brazilian ever breaks down, Shaky Simon comes off the bench. That is absolutely the last thing Jurgen Klopp wants, and absolutely the first thing everyone else wants.

Manchester City: Ederson
City have quality cover throughout their squad – except in the goalkeeping department. The alternative to Ederson was scary enough when Claudio Bravo was sat on the bench. With the Chilean crocked for the season, Pep Guardiola had to bring back rookie Aro Muric from NAC Breda.

Manchester United: Romelu Lukaku
Marouane Fellaini is pushing his Belgium team-mate after a couple of man-of-the-match performances to help ease the pressure on Jose Mourinho. But Lukaku has scored three of the four goals that have offered the manager some respite and the centre-forward looks like being run into the ground again this season despite the weird clamour for Marcus Rashford to play through the middle.

Newcastle: Paul Dummett
Newcastle caved in when Jamaal Lascelles went off at half-time against Arsenal and though the captain’s importance to Rafa Benitez is obvious, at least the manager has other bodies to use at centre-back. If Dummett is ever missing, the only alternative is Javier Manquillo, who isn’t trusted in his primary position at right-back, or Achraf Lazaar, about whom Rafa has never bothered to hide his opinion: “The reason we put him in the squad is because we know it’s a weak position and we have no back-up so it’s just in case.”

Southampton: Cedric Soares
The Portugal right-back returned later than any other Saint – four days before the opening game of the season – but Cedric has still started all five Premier League matches. The 27-year-old is one of the club’s biggest assets but he remains their only specialist right-back.

Tottenham: Harry Kane
The England striker is in wretched form and seems to be running on empty but Mauricio Pochettino still reckons he would be crazy to give the England striker a breather, especially when Fernando Llorente is the only direct replacement.

Watford: Roberto Pereyra
Richarlison is thriving at Everton but the Brazilian’s replacement is making a decent fist of filling his boots. Watford’s early success has been based on organisation and structure, but Pereyra, a Champions League finalist with Juventus, brings creativity that the Hornet would otherwise be lacking. And his three goals have earned half of their 12 points.

West Ham: Marco Arnautovic
A year ago, the attacker was one of West Ham’s greatest liabilities. Now, they can barely do without him. The Hammers refused to consider the prospect of cashing in on the 29-year-old when Manchester United’s interest emerged in the summer and without his three goals and an assist – an unselfish pass to create the opener in their first win at Everton – Manuel Pellegrini would be in an even bigger mess.

Wolves: Matt Doherty
Martin O’Neill doesn’t fancy him but Wolves’ longest serving current player has taken to the Premier League with apparent ease – despite that own goal at Leicester. The right wing-back has no specialist cover aside from Dominic Iorfa, who Wolves were trying their hardest to shift off the books during the summer. To lose Doherty would mean double jeopardy, with another established first-teamer having to be dragged out of position to cover.