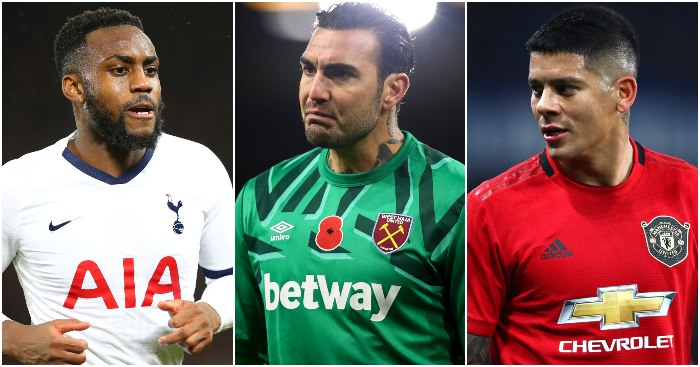 ARSENAL – Shkodran Mustafi
‘King of blunders’, says Emmanuel Petit and too old to be taught how to defend, according to Ian Wright. The most expensive German defender ever is the worst of a bad lot when it comes to Arsenal’s centre-backs. The Gunners would certainly sell for the right price, especially since Mikel Arteta knows he is obligated to buy more defenders, but no club out there is willing to be the patsy.

ASTON VILLA – Henri Lansbury
Despite buying a new team in the summer, Villa aren’t in the position to be making drastic cuts to their squad. January is all about finding replacements for Tom Heaton and Wesley, especially now Dean Smith seems to have got Danny Drinkwater on board. Villa may have been willing to listen to offers for Jonathan Kodjia before Wesley’s injury but now it seems the 30-year-old will be needed through the last half-season of his contract. So Lansbury could be the Villan closest to the exit with the midfielder failing to impress in his opportunities this season. His two starts came in defeats to Sheffield United and Watford and his presence in those losses did not seem to be a coincidence. He couldn’t get in Villa’s Championship side so it’s been a surprise to see him anywhere near Smith’s squad.

BOURNEMOUTH – Asmir Begovic
The Bosnian keeper doesn’t feature in Eddie Howe’s thoughts and the Cherries would love to get his wages off their books now he has returned from a six-month loan spell at Qarabag. Begovic says he would be willing to take another pay cut but reports suggest Bournemouth are not so desperate to get rid that they would consider loaning him to a relegation rival such as Aston Villa.

BRIGHTON – Ezequiel Schelotto
Prior to Christmas, the Argentina-born right-back would have been the obvious name for Brighton. Before Boxing Day, the 30-year-old had not started a Premier League match since the final day of the 2017/18 season but at Spurs a fortnight ago, he was given an opportunity and he seized it with a display full of energy. He also featured in the cup defeat against Sheffield Wednesday but thoughts of an unlikely re-emergence seem fanciful since Brighton are known to be to the look-out for right-back options this month and they would probably relish the opportunity to claw something back for Schelotto before his contract expires in the summer.

BURNLEY – Joe Hart
Sean Dyche can’t afford to lose any of his regulars but the Clarets would entertain offers for big-money flops Ben Gibson and Matej Vydra. The only concern would be replacing them, whereas Dyche has a ready-made replacement for Hart in Bailey Peacock-Farrell. With Villa seemingly interested in Hart – in the final year of his contract at Turf Moor – Burnley would probably welcome the chance to get the former England keeper off their books.

CHELSEA – Olivier Giroud
Frank Lampard doesn’t fancy Giroud much, we know that for sure. Despite Chelsea being woefully short on strikers, the Blues boss has used the France star sparingly, starting him only once since the second game of the season, and that opportunity came in the 1-0 home defeat to West Ham. Lampard would love to strengthen that department this month and Chelsea would be similarly as enthusiastic at the prospect of getting a few quid in for Giroud before he cane walk away for nothing at the end of the season. Inter might be willing to make an offer.

CRYSTAL PALACE – Victor Camarasa
The emphasis for Roy Hodgson this month is on recruiting the ‘four or five players’ he feels Palace need, while at the same time retaining the services of Wilf Zaha at least until the end of the season. Hodgson’s is a thin squad, but he can certainly afford to send Camarasa back to Real Betis. The midfielder has played only five minutes in the Premier League this season and was nowhere to be seen in Palace’s squad for the FA Cup defeat to Derby.

EVERTON – Cenk Tosun
Carlo Ancelotti would shift most of the squad if he could, but rebuilding a side cannot be done in one mid-season month. Cuco Martina and Oumar Niasse are very much up for grabs but with their contracts expiring in the summer, it seems highly likely Everton are stuck with them until then. But Tosun still has two and a half years remaining on the deal he signed upon joining for £27million. Turns out he’s not “the best in Europe” at that price and no one seems to want to offer actual money for the 28-year-old, though Palace and Besiktas are willing to borrow him.

LEICESTER – Nampalys Mendy
Brendan Rodgers has no desire to sell any of his first-team players but Mendy, along with Filip Benkovic and Matty James, cannot consider themselves as such. Mendy has played 71 minutes in the Premier League this season and he won’t be offered new terms before the deal he signed upon joining Leicester for £10million in 2016 expires next summer. If anyone in Turkey is willing to cough up a few quid, Leicester snap their hands off. Otherwise, it seems likely to be a loan exit before a permanent goodbye at the end of the season.

LIVERPOOL – Rhian Brewster
Jurgen Klopp doesn’t want rid of any of his senior squad  – why would he? – but former prodigy needs to get away from Anfield to get senior minutes under his belt, which won’t happen any time soon at Anfield. Brewster has now joined Swansea, and it will be fascinating to see if he can live up to the hype.

MANCHESTER CITY – Benjamin Mendy
“Benjamin, he was injured long-term and hopefully he can stay because he has a special quality,” said Pep Guardiola in October, without revealing what that particular ‘special quality’ might be. Cheerleader? Whatever it is, we get the feeling Guardiola would willingly sacrifice Mendy on the proviso he can use the money for his favourite hobby: buying more ridiculously-expensive full-backs. But City appear extremely reluctant to do anything this month other than buy a centre-back, which they absolutely must.

MANCHESTER UNITED – Marcos Rojo
Despite Ole Gunnar Solskjaer’s vow to get rid of the deadwood at Old Trafford, so much of it still lingers. The summer saw United shift Romelu Lukaku, Alexis Sanchez, Chris Smalling and Matteo Darmian – finally – but Rojo remained, despite interest from Everton and elsewhere. United were only willing to sanction a cash sale because, in Ed Woodward’s infinite wisdom, the injury-prone Argentina defender was given a new deal and a pay rise only around a year before, despite it being pretty clear that his Old Trafford career was toast.

Rojo has left the building! pic.twitter.com/nzTuLZNhdw

NEWCASTLE – Joelinton
Newcastle fans were so flabbergasted at Mike Ashley forking out £40million last summer that few thought to question why the Magpies were spending so much on a striker who often played wide and had never scored more than eight league goals during seasons in Germany and Austria. Six months and one Premier League goal later, many are now wondering what the Newcastle scouts saw before the deal was supposedly done last February. Rather than the profit Ashley was eyeing, he’d be lucky to get half his money back.

NORWICH – Dennis Srbeny
Daniel Farke insists Norwich have no need to sell any of their players and his squad is thin as it is. But Srbeny is said to be attracting interest from Paderborn and a return to his former club could be on the cards. Farke is looking to strengthen his attack anyway and Adam Idah took his chance at the weekend to show that he could act as understudy to Teemu Pukki. So far this season Srbeny has made eight appearances, all off the bench, each lasting an average of just five minutes.

SHEFFIELD UNITED – Ravel Morrison
‘Where’s Ravel?’ was once upon a time a popular pastime around Manchester and eight years later, it seems Sheffield has caught on. Morrison hasn’t been seen around the Blades squad since September and he wouldn’t be missed if a link with Alan Pardew’s ADO Den Haag comes to anything.

SOUTHAMPTON – Josh Sims
Ralph Hasenhuttl isn’t being coy about his desire to strengthen the Saints, particularly in the full-back areas. There was talk that perhaps Che Adams might be allowed a loan spell so that the youngster could find his feet again in the Championship but Saints need all the forwards they’ve got. Sims’ situation is different. The winger spent the first half of the season on loan with New York Red Bulls and Hasenhuttl could do without him for the rest of the campaign with Sheffield Wednesday said to be interested.

TOTTENHAM – Danny Rose
Not only is Rose not bothered about staying at Spurs, he’s not that arsed about being a footballer. Fair enough when you consider some of the racism and abuse the England left-back has had to endure, but from Spurs’ point of view, his lack of motivation leaves them in something of pickle. He has already said he won’t leave until the end of his contract and Jose Mourinho has only used him for 31 minutes in the Premier League, but nevertheless Daniel Levy is obliged to pay him, which must really grate with the Spurs chairman.

WATFORD – Sebastian Prodl
Nigel Pearson has had a few weeks to get his feet under the table and assess which players he wants to keep around. For the likes of Prodl, Marvin Zeegelaar and Jose Holebas, it isn’t good news. Zeegelaar and Holebas both play at left-back which is a position Watford have been looking to strengthen since Danny Rose was in the building five months and two managers ago. Zeegelaar could go out on loan again while Holebas is out of contract at the end of the season. But Prodl has 18 months remaining on his deal and the Hornets could claw some money back on the Austrian centre-back.

WEST HAM – Roberto
Somehow, West Ham looked at Roberto’s track record and used that as a reason to sign him, rather than be wary. His run in the side showed exactly why he hasn’t put roots down anywhere because, frankly, he’s a dreadful goalkeeper. The Hammers are actively looking to replace him and Mario Husillos, the man who brought him to the club, lost his job as a consequence of that and a series of other terrible recruitment decisions.

WOLVES – Patrick Cutrone
The Italy-capped striker only arrived at Molineux in the summer but it has been a rapid descent since signing for £16million from AC Milan. The 22-year-old has played only 11 minutes in the Premier League since October and when Nuno wanted to give Raul Jimenez a rest for Manchester United’s visit in the FA Cup, it was Benny Ashley-Seal who got the nod. According to the Wolves boss, Cutrone has had his chances: “He has had, I believe in the beginning of the season, five games in a row. He had a lot of moments. But every player needs to compete at the right moments, when we decide it is the right moment for him to compete.”