Home Arsenal One player every Premier League club should build around 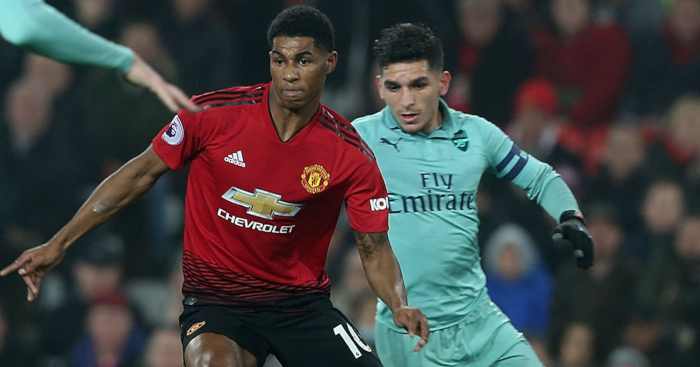 Arsenal – Lucas Torreira
This time last year, all the talk revolved around Unai Emery wanting to build his new side around Aaron Ramsey. With Plan A getting his feet under the table at Juventus, Plan B should centre around Torreira in his second season at the club. His first was encouraging, but despite adding some much-needed bite to the Gunners’ midfield, the 23-year-old still offered the impression that more is to come, especially in an attacking sense. Torreira can make those runs forward from deep which Ramsey timed so well – it will help if Emery could choose a consistent partner for the Uruguayan at the base of his midfield.

Bournemouth – David Brooks
Both of Eddie Howe’s big midfield signings of last summer had impressive debut campaigns in the Premier League. It will be exciting to see Jefferson Lerma develop as Bournemouth’s midfield anchor, and Brooks’ progress will be fascinating to watch now there is expectation upon the Wales playmaker that was missing a year ago. Understandably for a 21-year-old, the former Man City schoolboy struggled to demonstrate the kind of consistency Ryan Fraser showed, but with the Scotland winger set to leave this summer, more of the creative burden will fall at Brooks’ feet. There’s no reason to suspect he cannot take another step up.

Brighton – Solly March
Graham Potter says he won’t spend huge amounts this summer as he looks to change the Seagulls’ style as much as their results, meaning he must immediately begin to get more out of the players already at the club. March enjoyed his most consistent season at Brighton last term, contributing the second-highest number of assists (seven) but goals were rare, as they were for any Seagull not named Glenn Murray. But Potter’s more expansive style should suit March as he looks to build on the most productive season of his career.

Burnley – Dwight McNeil
The 19-year-old faces the challenge of building upon a hugely impressive breakthrough season during which he was the Premier League’s most productive attacking teenager, having a hand in eight goals in 25 appearances, 18 from the start. McNeil’s form on the left wing has reportedly caught the eye of Manchester City, Everton and Arsenal but the former Man Utd academy player will surely sit tight for at least another year. Few other teenagers will enjoy the responsibility Sean Dyche will allow McNeil next season.

Chelsea – Christian Pulisic
It is hard to envisage clearly what Chelsea will look like next season. Will they keep Maurizio Sarri? Will they be allowed to sign any players? If not, at least they got in early with Pulisic. The Blues have been far too reliant on Eden Hazard this season and with the Belgian set to be heading to Real Madrid after the Europa League final, Chelsea’s manager – whomever he may be – needs Pulisic to hit the ground running. The USA star tends to play off the right, as does Callum Hudson-Odoi, and if the England winger sticks around next season then one or both may have to be flexible.

Crystal Palace – Wilfried Zaha
Until a Champions League club stumps up the money for Zaha, we’re sticking with Wilf. The academy graduate embodies Palace and again this season he has demonstrated how important he is to the Eagle,s playing a part in 20 goals. More specifically, Zaha has led their counter-attacking charge, netting all but one of his goals away from home. Liverpool, Manchester City and Arsenal have conceded three goals at home only once each last season – each time against Palace. In all of those games, Zaha completed more dribbles and won more free-kicks than anyone else on the pitch, with each contribution helping to give Roy Hodgson’s overworked defence a breather. It is no wonder Palace are so reluctant to lose their talisman and they absolutely should hold out for top dollar.

Everton – Gylfi Sigurdsson
Everton’s director of football Marcel Brands have been forthright in discussing the club’s approach to the transfer market, focusing on investing in young players in the 20-25 bracket while insisting “we don’t want to invest big money in players who are older”. Had that been the case two years then they would not have thrown £45million at Sigurdsson, but the Iceland attacker is just coming off the highest-scoring season of his Premier League career having played more minutes than any of his outfield colleagues. He may turn 30 before the new campaign is a month old but Sigurdsson does not rely on his pace and, with a quality centre-forward ahead of him, the former Swansea star is capable of setting another benchmark.

Leicester City – Jamie Vardy
When Brendan Rodgers took over from Claude Puel and made a point of focusing the Foxes’ attack around the strengths of their most dangerous player, the new manager was rewarded with 10 goals in 11 games while Vardy made a late run to finish as the Premier League’s most potent Englishman. He may be 32 and have plenty of young legs around but Vardy hardly needs the young Foxes to do his running. The centre-forward can lead a European charge again next season and if Rodgers and Lee Congerton can recruit a quality alternative as part of a summer of reinforcement rather than revolution, then Vardy’s goals could even break up the top six.

Manchester City – Kevin De Bruyne
City won the Treble despite being without their best player for half the season. Knowing De Bruyne’s mentality, that will rankle and make the Belgian more determined than ever to prove himself once more. It certainly appeared to be the case when he came off the bench after an hour of the FA Cup final and walked away with the man of the match award. After a summer off during which time De Bruyne’s frame can recover, watch the 27-year-old go next season.

Manchester United – Marcus Rashford
Paul Pogba should be the obvious answer but he’s given up on United and many supporters have given up on him. For Rashford, there remains hope. The discussion over his contract and his apparent demand for assurances over the direction of the club haven’t gone down well among browbeaten fans who would rather be reassured by Rashford over his own consistency but next season will be the first time the 21-year-old will start a campaign as United’s leading centre-forward. With the faith of the manager and more quality and pace around him, the England striker will surely thrive.

Newcastle United – Sean Longstaff
Man Utd might be looking to the new Michael Carrick as a belated replacement for the original but Newcastle should doing everything to ignore the Red Devils’ interest and instead build their team around the 21-year-old local lad. That may seem premature when you consider that Longstaff has made the sum total of nine Premier League appearances since his debut last Boxing Day but Rafael Benitez recognises the talent before him. “I can see that,” said the Newcastle’s manager when the Carrick comparison was put to him. “But, at this stage, Sean has more mobility and stamina. Certainly he has the technique and he can use both feet as well.”

Norwich – Teemu Pukki
The Championship Player of the Year and top scorer netted 28 goals last season – just one less than Bolton could muster – and Norwich’s hopes of settling in the Premier League could hinge on whether Pukki can unsettle top-flight defences in a similar fashion. Premier League opponents won’t be caught on the hop like Championship opponents were after the 29-year-old’s arrival on a free from Brondby last summer, and he certainly won’t get the 3.3 shots per game he enjoyed last term. But, as Marcelo Bielsa said: “Pukki’s skills are not common in English football. He’s a player who is hard to neutralise. He plays very simple, but he is very efficient.”

Sheffield United – Oliver Norwood
The former Man Utd midfielder has been promoted in each of the last three seasons but never got a taste of Premier League action after Brighton and Fulham decided they could do better. Now Norwood, who featured in the Championship Team of the Year, will be a top flight regular with the Blades after completing more passes per game than anyone in the division other than Swansea’s Matt Grimes. Norwood can penetrate too, with only three players making more key passes per game. When Norwood isn’t spraying it around, you might find him sat at the back with John Egan while United’s other centre-halves go overlapping their wing-backs.

Southampton – Nathan Redmond
Mark Hughes’ exit was good news for everyone other than Mark Hughes but few players have prospered as much in the former manager’s absence. “I think Reddy is one of the guys who has improved and he knows he can be the special one to make a difference in games,” said Ralph Hasenhuttl after the winger earned two of the club’s Player of the Year awards and his England place back after leading Saints for goals and assists this season. “I see the passion in his eyes and that’s exactly what we need to make the next step,” added the boss, who will be expecting even greater consistency from the 25-year-old next term.

Tottenham Hotspur – Heung-min Son
Before this season, Spurs were “the Harry Kane team” and though Mauricio Pochettino took great offence at Pep Guardiola’s assessment, it was a hard case to argue. This term, Spurs haven’t been able to rely upon their primary goalscorer and in his absence Son and Lucas Moura have stepped up. If Pochettino can find a way to get the best out of the trio together, Spurs will be in business.

Watford – Gerard Deulofeu
It has taken a while but the Spain winger says he now feels settled after stints at Barcelona, Everton, Sevilla, Everton again, AC Milan and Barca again prior to rocking up at Vicarage Road in January last year. “You could say my career has been a bit irregular,” he admitted prior to the FA Cup final. “You need to find calm and I have it at Watford.” Having now put roots down with Watford while enjoying the faith of Javi Gracia, Deulofeu can concentrate on adding consistency to the flashes of quality he has shown since joining the Hornets for £11.5million.

West Ham – Felipe Anderson
“A good start,” was the Brazil attacker’s assessment of his first year in the Premier League after becoming the Hammers’ record signing last summer. Eight goals before the New Year was a haul better than many expected but Anderson’s form tailed off in 2019, with only a single goal and a couple of assists, which is perhaps to be expected in his maiden season in England. Next year, the expectation rises, especially if Marko Arnautovic quits West Ham this summer. Manuel Pellegrini will be confident the £40million recruit can handle it – providing Liverpool don’t bid £75million. Which they won’t.

Wolves – Diogo Jota
Raul Jimenez emerged from a crowded field to win the Wolves Player of the Season award but his strike partner must have pushed the centre-forward close. Since moving inside off the left into a second striker role, Jota scored nine goals and created another five more but the 22-year-old, who was named in Portugal’s squad for the Nations League finals, plays a huge role in Wolves’ counter-attacking success against the Big Six by carrying Nuno’s side up the pitch. With Wolves having asserted themselves as the best of the rest, next season, Jota will be front and centre of their attempt to improve their fortunes against teams happy to sit in play the Molineux men at their own game.