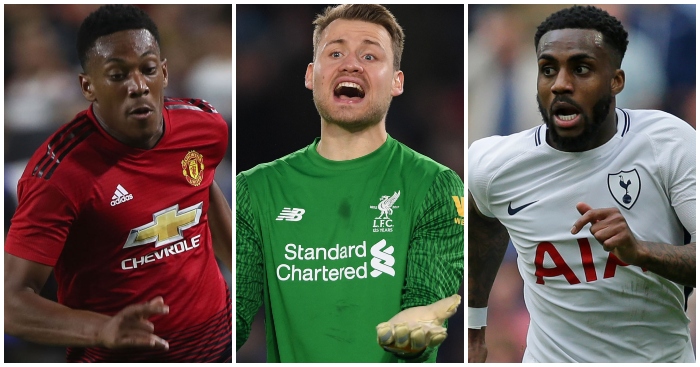 Arsenal: David Ospina
The Arsenal candidate in every ‘players who could leave…’ article written this summer. The Colombia keeper is third choice and Unai Emery said that he, along with Carl Jenkinson and Joel Campbell, can go. Besiktas want Ospina, but they would prefer to try before they buy. Which is probably wise.

Bournemouth: Jack Simpson
Eddie Howe seems to have done all the chopping and changing required to his Cherries squad and the manager is reluctant to streamline any further. But Simpson was linked with Rangers and the 21-year-old finds himself behind Nathan Ake, Steve Cook and Simon Francis in the queue for a central defensive starting role.

Brighton: Percy Tau
The 24-year-old striker became Brighton’s seventh signing of the transfer window last month and the Premier League’s first Percy, as far as we can recall. But Chris Hughton said the immediate plan was to send the South Africa international out on loan in Europe. We just don’t know where, yet…

Burnley: Jon Walters
Three England goalkeepers is one too many at Burnley but Nick Pope’s injury is reportedly set to keep him out for at least the first three months of the season so Tom Heaton will have to make do with a back-up role again. Sean Dyche would be more receptive to an offer for striker Walters, who joined the Clarets last season but played only 94 minutes in five substitute appearances. Preston are apparently keen to give the 34-year-old the opportunity to retain his Republic of Ireland place.

Cardiff: Lee Tomlin
The attacker spent the second half of last season on loan at Nottingham Forest and having already been omitted from Cardiff’s 25-man squad, the message from Neil Warnock is clear: do one.

Chelsea: Ruben Loftus-Cheek
Keeping the England midfielder beyond the Premier League deadline suggests Chelsea are keen to have him around this season, and the needs of the club must come first. But Loftus-Cheek’s quest for game time is equally pressing and it is not easy to see where it will come in Maurizio Sarri’s packed midfield. A loan abroad would certainly do his development no harm, but if the Blues aren’t open to Premier League offers then clubs on the continent aren’t likely to have any more joy. Which is a shame.

Crystal Palace: Johnny Williams
There are likely to be a few loan exits from Palace in the coming weeks – Under-23s coach Richard Shaw admitted as much. Nya Kirby, Sullay KaiKai and Jason Lokilo would all benefit from senior football away from Selhurst Park but Williams, now 24, just needs any kind of football. The talented midfielder’s career has been hampered by injuries, which wreaked havoc again during a spell at Sunderland last term. A decent pre-season has offered some encouragement that his luck may have changed but the minutes he needs probably won’t come at Palace.

Everton: Yannick Bolasie
The unlucky winger, signed from Palace for £25million two years ago before suffering a serious knee injury, doesn’t feature in Marco Silva’s plans but there are plenty of Championship clubs willing to make room for the 29-year-old. Aston Villa and Middlesbrough appear to be the two most interested parties, while Galatasaray could offer a different option.

Fulham: Rui Fonte
The Portuguese forward saw his playing time cut drastically by Aleksandar Mitrovic’s arrival in January and his prospects look even more bleak after the Cottagers’ summer recruitment programme so Fulham will listen to any offers, which are most likely to come from the former Braga striker’s homeland.

Huddersfield: Abdelhamid Sabiri
The Terriers made the vast majority of their cuts while carrying out their recruitment but Moroccan attacking midfielder Sabiri could still make a temporary move to get some game time. The 21-year-old had an encouraging pre-season after what he admitted “was a tough first season” and David Wagner was not surprised when last summer’s recruit dipped during his debut campaign in the Premier League.

Leicester: Andy King
The Foxes have already shifted Islam Slimani and Leonardo Ulloa since the deadline passed last Thursday evening, but Claude Puel still has a tough job whittling down his squad to 25. Danny Simpson and Andy King look like being the odd ones out, with King having lost his No.10 jersey to new arrival James Maddison.

Liverpool: Simon Mignolet
Liverpool were reportedly open to offers for both Mignolet and Loris Karius but Jurgen Klopp’s preference between the two is obvious so the Belgium No.2 has to get away to avoid being Liverpool’s No.3. Besiktas apparently don’t mind being the recycling bin for Premier League keepers and they’ll have either, while Napoli are said to be keen on Mignolet. After the departure of another Liverpool cast-off, Pepe Reina, Carlo Ancelotti has a vacancy for a No.1.

Manchester City: Eliaquim Mangala
It’s too late for a Premier League club to panic their way into offering Mangala a temporary escape from City, but the erstwhile France centre-back’s reputation may hold for long enough in Europe to secure a loan switch to the continent. The easy link is the Turkish clubs, whose primary purpose in recent years has been to provide highly-paid Premier League flops with leverage in other negotiations. Managala’s fitness remains a question mark after suffering a knee injury at Everton in February but City will be keen to push the £45million purchase out of the door, ideally in exchange for a few quid given he can leave for nothing next year.

Manchester United: Anthony Martial
Jose Mourinho and Paul Pogba still have some kissing and making up to do, but their relationship doesn’t seem to have passed the point of no return just yet and Ed Woodward wouldn’t dare sell the World Cup winner this month, especially after getting pelters for United’s late window dealings, or lack thereof. Mourinho, though, would be entirely open to putting some distance between himself and Martial and the player himself is said to be keen to go. AC Milan were reportedly keen on a loan move, but the same has been said of the Rossoneri and approximately 427 other players.

Newcastle: Freddie Woodman
One area – the only area – Rafa Benitez is well stocked is the goalkeeping department. Mike Ashley forked out to make Martin Dubravka’s move a permanent one this summer, while Karl Darlow and Rob Elliot are on hand to deputise if needs be. That leaves England Under-21 international Woodman redundant at a stage in his development where he needs to be playing. Having had a couple of loan spells in Scotland, the 21-year-old would benefit from some Championship experience.

Southampton: Fraser Forster
The giant goalkeeper’s status has plummeted from being England’s third choice to the same at Saints. Burnley were linked, as they tend to be with England keepers these days, but a move abroad or down a level is now the only choice. No wonder he’s frustrated…

Tottenham: Danny Rose
The England left-back hasn’t hidden his displeasure with the predicament he finds himself in at Spurs but after not so long ago being linked with a £50million move to Manchester United, Rose’s only options for a quick getaway are abroad. Schalke are said to have made a season-long loan offer but the 28-year-old is waiting for a better offer, knowing full well that PSG are in the market for a first-choice left-back.

Watford: Dimitri Foulquier
“I must make another transfer or take in another loan,” said the right-back who we absolutely have not made up. The former France Under-21 international joined the Hornets last summer before moving to Strasbourg for the season. With Adam Masina and Jose Holebas ahead of him, Foulquier will be off again before the end of the month if he has any intention of playing football this season.

West Ham: Reece Oxford
Manuel Pellegrini was one of the biggest spending managers this summer but now he has just over a fortnight to trim his squad. Sam Byram and Jordan Hugill have already left on loan and Oxford, who spent last season at Borussia Monchengladbach, has been linked with a return to the Bundesliga, with Hannover, RB Leipzig and Frankfurt all said to be keen on the 19-year-old. The Hammers were reportedly open to offers of £10million but a loan seems far more likely.

Wolves: John Ruddy
The 31-year-old keeper played 45 games during Wolves’ promotion charge last term but, like a few of his team-mates, Ruddy now finds himself on the sidelines after the arrival of high-profile signings. The former England keeper (another one) says he is “hopeful of finding a solution” to his current situation, though Wolves may be prefer to keep him around as cover for Rui Patricio.