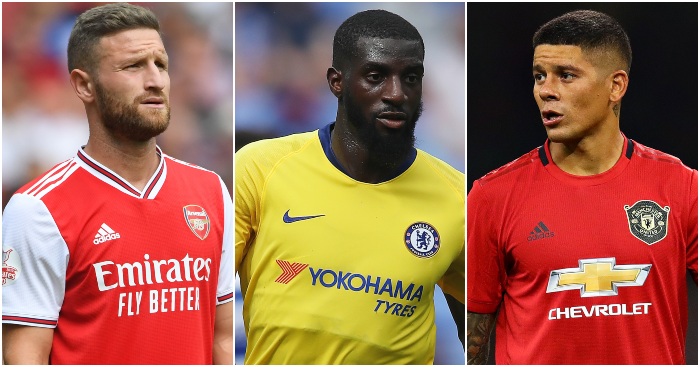 The Premier League and Championship deadline passed last week but clubs can still sell or loan players abroad or to League One and League Two. Which is probably the likely fate of this lot…

Arsenal – Shkodran Mustafi
Unai Emery say he has spoken three times to the German defender since the end of the last season to explain to him that he can leave Arsenal. The fact he could not make the bench for the Gunners’ opener at Newcastle – even with David Luiz not ready to start and Rob Holding unavailable – should reinforce that message. There were Ligue Un and Bundesliga clubs looking at Mustafi, in much the same way people slow down to stare at car crashes, but no offers as yet.

Bournemouth – Asmir Begovic
Eddie Howe now has four goalkeepers with Premier League experience after blooding Aaron Ramsdale in Bournemouth’s season opener against Sheffield United on Saturday. Four into three doesn’t go and with Artur Boruc warming the bench on Saturday, that leaves Begovic and Mark Travers with plenty to think about. Travers has recently signed a new deal and he could head out on loan, following in Ramsdale’s footsteps last season when he enjoyed a fruitful spell at AFC Wimbledon. But the landscape looks rather more bleak for Begovic at Bournemouth and the Bosnian will doubtless have been on the phone to his agent to find him some European options.

Aston Villa – Lovre Kalinic
Villa only signed the £7million goalkeeper in January but the Croatian has endured a frustrating spell in England. Injury saw Kalinic quickly lose his place to Jed Steer and he was unable to regain it while Villa powered to promotion via the play-offs. The arrival of Tom Heaton pushed Kalinic further down the pecking order and the 29-year-old is left hoping for a swift return to Europe.

Brighton – Aaron Connolly
The Irish striker took his opportunities to impress during Graham Potter’s first pre-season with Brighton, but the arrival of Neal Maupay put another obstacle between the striker and the first team. Connolly signed for Luton for the second half of last season but could not join up with the Hatters until April because of a hamstring injury. Having made a positive impression on Potter, now might be the time to try again in League One.

Burnley – Matej Vydra
The striker joined Burnley for £11million last summer when he was the Championship’s top scorer but life in the Premier League has been tough going for 27-year-old. He reportedly handed in a transfer request during the late stages of the Premier League window and his desire to leave will not have been diminished by his omission from the bench on Saturday. Sean Dyche reportedly knocked back six loan bids in January for Vydra but the Clarets will be rather more willing to do business should a European side offer the former Udinese striker an escape.

Chelsea – Tiemoue Bakayoko
Frank Lampard gave the £40million signing from Monaco an opportunity to impress in pre-season but the new Chelsea boss had Bakayoko sussed with a couple of friendlies to spare. Lampard agrees with Maurizio Sarri: Bakayoko’s got to go. Where? Well, PSG went elsewhere having been linked with the midfielder at the start of the month and it seems the current frontrunner is Galatasaray.

Crystal Palace – Jairo Riedewald
The former Ajax centre-back walked away from a possible loan move to Celta Vigo in January over concerns that he might not play enough. He couldn’t do any worse than at Palace where he failed to make a single Premier League appearance last season, and Gary Cahill’s arrival hardly improves his prospects among the seven central defenders available to Roy Hodgson. Should a similar loan offer arrive before the end of the month, the 22-year-old would be well advised to take it.

Everton – Yannick Bolasie
The winger has been desperately unlucky with injuries since moving from Palace to Everton in 2016. Bolasie has spent a couple of loan spells away from Goodison Park at Aston Villa and Anderlecht, though reports suggest he could be set for a permanent move away with CSKA Moscow, Celtic, Besiktas and Rennes all keen on the 30-year-old. CSKA reportedly had a loan deal agreed with Everton which included a £5million option to buy but the player isn’t keen on moving to Russia.

Leicester – Adrien Silva
“I would think over the next few weeks there will be one or two going out to get playing, especially experienced players, to go out, get games and to continue with their career,” said Brendan Rodgers last week after the Premier League window closed to leave Leicester with an inflated squad. Silva’s Foxes career has been a disappointment from start to finish and a return to France has been mooted following a stint at Monaco during the second half of last season.

Liverpool – Dejan Lovren
The Croatia centre-back is keen to move on after five years at Anfield following his omission from Jurgen Klopp’s squad for the Premier League opener against Norwich last week. Roma are the side reportedly most keen and Liverpool might get close to their money back on the £20million signing from Southampton, with a deal set to be structured as a loan initially before becoming permanent next summer. Whether that prospect will appeal to Klopp as much as the club’s accountants remains to be seen since the Reds may need four senior centre-backs to fight on all fronts this season.

Manchester United – Marcos Rojo
The Argentina defender took his agent with him to Carrington last Thursday in an attempt to secure a loan move to Everton but United wouldn’t entertain the prospect of strengthening a rival without receiving a truck-load of cash in return. Should they receive a similar loan proposal from abroad, you would think United might be more willing to shift one of the seven centre-backs currently on their books. Rojo, along with Chris Smalling and Phil Jones, were overlooked even for bench duty at the weekend.

Newcastle – Achraf Lazaar
Lazaar, Jack Colback, Jamie Sterry, Rolando Aarons and Henri Saivet were all left disappointed by Steve Bruce when the new Newcastle boss whittled down his squad to 25. None of that quintet were given a squad number and Lazaar reacted to that news by heading to Italy in search of another club who might give an opportunity like Palermo and Benevento have in the past.

Norwich – No one
The Canaries have already got their loans arranged and exits sorted, which is no sodding good for this piece. For that reason and that reason alone, I hope the organised b*stards go down.

Sheffield United – Jake Wright
Chris Wilder expected Leon Clarke to go before the deadline last week but nothing materialised for the striker, and since the 34-year-old is “an established Championship player” it seems unlikely that a League One or League Two loan would appeal. The same cannot be said for defender Wright, who was not assigned a squad number for the new season. The 33-year-old will either have to drop a couple of divisions or rot in the reserves.

Southampton – Mario Lemina
The exiled midfielder wanted to stay in the Premier League but since he’s burned his bridges with Saints, that seems unlikely. So it’s fortunate that he’s not particularly fussy: “I don’t close the door on any club, or any country. I aspire to play in the very biggest clubs, now we will see what is offered to me.” So far, not a lot.

Tottenham – Jan Vertonghen
The Belgium defender’s omission from the squad to face Aston Villa on Saturday heightened fears among Spurs supporters that Daniel Levy is looking to cash in on the 32-year-old while he still can. Vertonghen is in the final year of his contract at Tottenham and has so far refused to sign a new one. Mauricio Pochettino insisted there was “no issue” with the versatile defender but he followed that by saying that he chose players who “deserved to play”. Vertonghen can take his non-selection as a warning, either over his form or his future. Whichever it may be, there are plenty of European sides willing to offer him a way out and Levy a small profit before his asset depreciates entirely.

Watford – Isaac Success
It was reported last week that Watford would listen to enquiries for Success if they landed a winger before the deadline. They did – just – when Ismailia Sarr arrived from Rennes, but a club-record deal was not completed in time to arrange an exit for Success. The Nigeria star has also lost his No.10 jersey to Danny Welbeck and despite coming off the bench during Saturday’s dismal defeat to Brighton, Success will be open to whatever European clubs may have to offer.

West Ham – Carlos Sanchez
The Hammers have an uncharacteristically balanced squad at present, with little fat to trim and a couple of players for each position. Colombian Sanchez was on the bench as defensive-midfield cover against Manchester City on Saturday but many West Ham fans will have been relieved that there was no need for the 33-year-old to get involved. It is unlikely that Sanchez is of the required standard to adequately cover for Declan Rice, Mark Noble of Jack Wilshere but Manuel Pellegrini will have to weigh up whether he can afford to be a man lighter in midfield should an offer to take Sanchez back to Europe arrive before the deadline.

Wolves – Harry Burgoyne
The 22-year-old keeper has already made one move this summer but unfortunately for the keeper, it was on loan to Bury in League One. The Shakers are in financial dire straits and unable to fulfil their fixtures at present, which has left Burgoyne back at Molineux and hoping an alternative can be found where he can build on a promising spell at Falkirk last season.