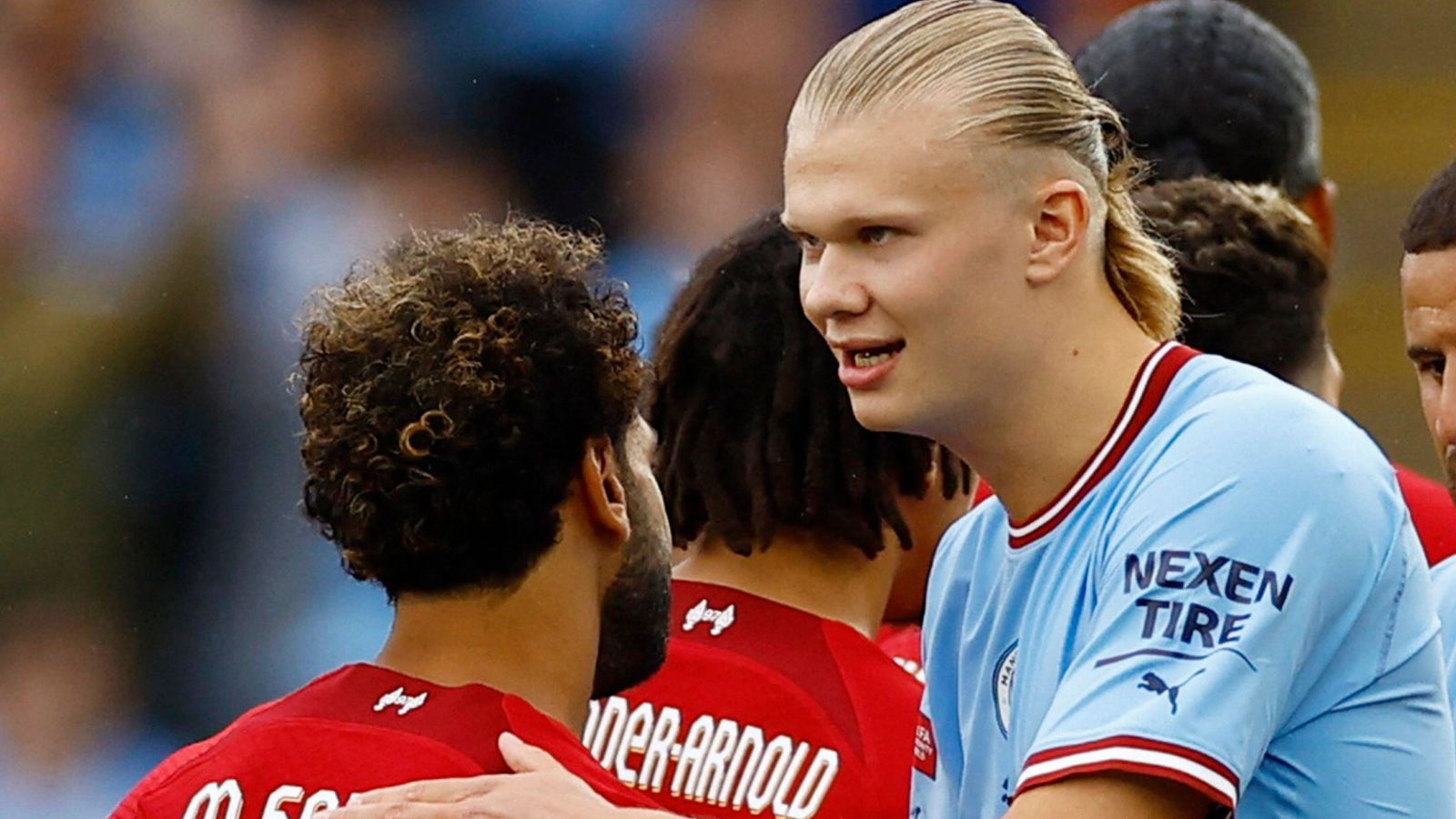 As the international break approaches and with it a final chance for international managers to try something before naming their World Cup squads, we can all have a stab at working out who is or might be going to the uniquely calendared World Cup this winter.

But we crave certainty, and thus we move away from those ‘could be… if this happens’ or wondering whether a player is ‘on the plane’ or ‘in the departure lounge’ or ‘stuck in a non-EU Passport queue’ or whatever the terminology is these days. We want to know definites, and that means who’s not going. And that means players whose countries aren’t going to the World Cup. We’re not interested in who almost certainly isn’t going or who might be ruled out by injury. We deal here in absolutes.

Purely and specifically to mock us, Ecuador have managed to throw a spanner into even those simplest of works this week but we’ve cracked on regardless like absolute troopers…

Arsenal – Martin Odegaard
When thinking about one-per-club ideas I must confess to being a simple creature. “Is there an obvious one for Arsenal?” I think to myself, correctly insisting as I always do that Bournemouth’s AFC-based shenanigans do nothing to promote them up the alphabetical list of Premier League clubs. If there is indeed an obvious one for Arsenal, then on we go. This sort of gung-ho failure to consider whether the other 19 clubs, most of whom it shouldn’t be too controversial to note are lower-profile than the Gunners, will fall so easily from the sky has traditionally come back to bite on the arse in what is known round here as The Burnley Trap.

Luckily, we no longer have to worry about them, and so here we are merrily into the breach once more with the very good but very Norwegian and therefore very not-World Cup-bound Martin Odegaard, who spares us the usual necessity of picking One Per Club legend Mo Elneny here. Forgotten men. Needs a move. Found down back of sofa. Surprise package. Unsung hero. Stuck until January. He has been them all and more. Which makes me think of a nauseatingly self-indulgent and cringily meta One Per Club feature of One Per Club legends. I mean, we’ve got Arsenal sorted and that’s all we need to dive in.

Aston Villa – John McGinn
Going to be a few Scots in here. At Villa, you could make a case for Jamaica’s Leon Bailey rather than McGinn but it’s all much of a muchness. Nobody really feels like Villa’s best player at the moment. It seems close to a hypothetical concept. They really aren’t very good, you know. McGinn, though, can at least be expected to have battled through more minutes than Bailey (we’re only seven games in to Villa’s season and McGinn already has over 200 minutes active service) and thus be in greater need of a rest.

Bournemouth – Jefferson Lerma
Jefferson Lerma v Ryan Christie is the debate nobody knew they needed, but let’s avoid getting too Scotland-heavy too early and opt for the Colombian, if only to note that the team that came so close to halting England’s run at the last-16 stage have this time made a bollocks of qualifying and won’t be around. Even Ecuador’s possible expulsion won’t save them.

Brentford – Aaron Hickey
We were gutted for Scotland when they didn’t make it to Qatar but we’ve already got over that as it becomes clear how useful they’re going to be in steering us through the murkier waters of this OPC. Even without Burnley, there’s no point pretending the Bs aren’t still a potential struggle. Hickey may only be 20 but he’s started all six league games since joining Brentford and lasted at least an hour of each of them. In the two games he has finished, he’s managed to pick up bookings in the 95th and 97th minutes, which might explain why clever old Thomas Frank has chosen to hook him after 83, 80 and 79 minutes in other games. Always thinking is Frank.

Of course, the best Brentford player who probably won’t go to the World Cup is Ivan Toney, but that ‘probably’ was an ‘almost certainly’ a month ago and is already doing some pretty serious heavy lifting given form and fitness concerns around Tammy Abraham, Dominic Calvert-Lewin and pretty much all the other fringe strikers Gareth Southgate has handed opportunities on a rotating basis. Toney’s turn this month, you’d think.

Brighton – Enock Mwepu
A perfectly satisfactory answer given his efforts this season, but this feature will be a stronger one as and when Ecuador officially get the boot and the ludicrously excellent Moises Caicedo slides into this position.

Chelsea – Jorginho
There will, to nobody’s very great surprise, be a vast number of Chelsea players heading off to Qatar in November. But the Brazil-born Italian penalty specialist Euro 2020 winner will not be among their number after Italy decided it would be funnier to not bother qualifying for a second successive World Cup after marching so impressively to continental glory at Wembley last year. It remains a head-scratchingly implausible yet undeniably accurate slice of trivia that Italy’s last action in a World Cup knockout game was their victory in the 2006 final and that this will have been the case for 20 years – at least – by the time it changes.

Crystal Palace – Wilfried Zaha
Obvious answer is obvious but that doesn’t make it wrong. Zaha has four Premier League goals already this season and has been a shoo-in for this spot ever since Ivory Coast failed to even reach the final stage of African qualifying.

Everton – Alex Iwobi
It has not been a good start to the season for Everton. They remain winless and unconvincing. But one of the chief reasons it has not been far, far worse has been the staggering midfield dominance of Iwobi, previously apparently doomed to see out his Premier League days as another unfulfilled talent, just another wastrel from the late-Wenger Emirates. Now he is so much more than that and, thanks to Nigeria’s away-goals defeat to Ghana in the final play-off round of qualifying, set for a nice long mid-season break.

Fulham – Neeskens Kebano
Serbia’s impressive qualification, topping their group at Portugal’s expense, denies us the chance of putting the Premier League’s best player not called Erling Haaland so far this season in here and swiftly moving on but we go again and land on DR Congo’s Neeskens Kebano, who has started five of Fulham’s six league games.

Leeds – Luis Sinisterra
Not all of these are going to be good. But in a squad of Englishmen and Americans and Danes and Poles? Stupid countries, stupidly qualifying for stupid World Cups.

Leicester – Wilfred Ndidi
And fellow Nigerian Kelechi Iheanacho. And Zambia’s Patson Daka. And arguably most importantly, given where Leicester’s most pressing and damning inadequacies and shortages exist, Northern Ireland’s Jonny Evans. He’s played every minute of Leicester’s six Premier League games thus far, which is not necessarily something you want to shout about given the 16 goals Brendan Rodgers have conceded already.

Liverpool – Mo Salah
You can have your Andrew Robertsons, your Luis Diazes and even the Naby Keitas of this world but really there absolutely no point over-thinking this one. If it wasn’t for the next fella on this list he’d be the best player on here. Konstantino Tsimikas, there’s another one. Liverpool are doing alright here, really. Especially as Trent Alexander-Arnold will also probably get left out despite Gareth Southgate’s 26-man squad containing 17 right-backs.

Manchester City – Erling Haaland
It’s just really greedy, isn’t it? Being the best team in the league already and then adding the new best player in that league and then having that player not even be inconvenienced by having to clear off to a World Cup in the middle of the season.

It will genuinely be staggering if anyone ends the season within 15 points of the greedy Premier League title-hogging buggers. Liverpool aren’t going to do it this season, so who is? Arsenal? Tottenham? Behave.

Manchester United – Scott McTominay
Salah, Haaland, McTominay. I mean…no disrespect but it’s not quite the same, is it? And it’s either McTominay or Anthony Elanga. Especially now even Marcus Rashford and/or Jadon Sancho could have played their way firmly back into Gareth Southgate’s plans.

Newcastle – Alexander Isak
If you’re going to spend £70m on a striker, it might as well be one who isn’t going to be absolutely spent from a year’s continuous football by the end of the season. That’s just common sense. Having a New Zealander and a Scotsman among your forward ranks also makes a surprising amount of good sense this year.

Nottingham Forest – Taiwo Awoniyi
Take your pick here from two Nigerian forwards. Awoniyi and Emmanuel Dennis will both be missing the World Cup after the Super Eagles failed to qualify for Qatar. Most of the other small handful of new players Forest bought in for their Premier League return are at least theoretically eligible for World Cup selection. Not Serge Aurier, though, which is just one more reason why Forest were so shrewd and correct to bring that particular loosest of cannons back to English football.

Southampton – Che Adams
He may be as surprised as anyone else by the fact, but he’s got four goals already this season even if two of them were mere Carabao banana-skin avoidance at Cambridge. That’s already half the number of all-competition goals he scored last season in a fifth of the games.

Tottenham – Dejan Kulusevski
Spurs are going to be sending several key players and maybe Eric Dier as well to Qatar but the revolutionary Kulusevski will not be among them after Sweden failed to make it through the play-offs.

Spurs would certainly not be where they are now without his contribution; after defeats in his first two Premier League appearances, Spurs have lost just three times in a further 22 games that have brought with them 49 points, a Champions League spot and an unbeaten Premier League start to this season. Kulusevski’s contributions go beyond mere numbers, but six goals and 10 assists in 24 goals is really very good.

West Ham – Michail Antonio
The Hammers may well boast the Premier League’s most rested frontline after the World Cup. While England’s Jarrod Bowen may yet be off to Qatar, Hammers fans can rest easy knowing Jamaica’s Michail Antonio, Italy’s Gianluca Scamacca, Algeria’s Said Benrahma and Ivory Coast’s Maxwel Cornet will all be sat with their trotters up watching it all on TV.

Wolves – Nathan Collins
And at present speed and course he’s going to be well in need of that month off having played every possible minute for Wolves – even a full 90 minutes against Preston in the Carabao – since joining from Stoke this summer.