Home Everton O’Neill and Koeman set for another McCarthy clash 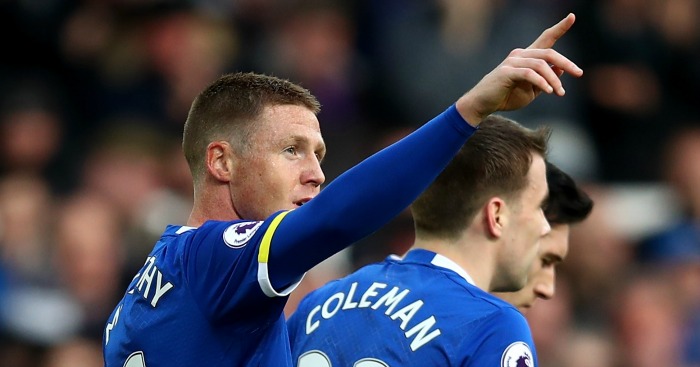 Martin O’Neill is hoping to avoid another club versus country row with Everton as James McCarthy attempts to prove his fitness ahead of the World Cup qualifier against Wales.

McCarthy was included in a provisional 39-man squad for the Group D showdown with the Welsh on March 24 and the friendly against Iceland four days later when it was announced on Monday morning, despite sitting out Everton’s Premier League victory over West Brom with a hamstring injury.

O’Neill has found himself at loggerheads with Toffees boss Ronald Koeman over the 26-year-old on more than one occasion during the qualifying campaign, but is keeping his fingers crossed this time around.

Speaking as he unveiled his squad at a press conference in Dublin, he said with a smile: “At least Everton can’t blame us this time, I hope, James hasn’t been with us for months.”

He added: “I spoke to James the other day and he expects to be training by the end of this week, so we’ll see then.”

Koeman claimed McCarthy had been “massively overloaded” when he played in both October qualifiers against Georgia and Moldova following his return from groin surgery – a charge O’Neill angrily denied – and was less than happy when he was called up for November’s qualifier against Austria as he recovered from a hamstring injury.

The midfielder ultimately withdrew from the party which travelled to Vienna after failing to recover, but once again faces a race against time to demonstrate his readiness to play a part in a key fixture for Ireland.

His was not the only notable inclusion in the squad, with Newcastle goalkeeper Rob Elliot selected for the first time since suffering knee ligament damage on international duty almost a year ago.

Elliot was injured during the Republic’s 2-2 friendly draw with Slovakia at the Aviva Stadium on March 29 last year and has not played a senior game since, although he has returned to the Magpies bench in recent weeks after a lengthy period of rehabilitation.

There were no places for injured pair Shane Duffy and Stephen Quinn, while Burnley midfielder Robbie Brady is suspended for the Wales game after collecting a second yellow card in the competition during the 1-0 victory in Austria which has left Ireland sitting two points clear of Serbia at the top of the group.

However, there were first senior call-ups for Reading midfielder Liam Kelly and Brentford defender John Egan, with the latter, who was on the books at Sunderland during O’Neill’s spell in charge on Wearside, getting the nod amid doubts over the fitness over Ciaran Clark, Richard Keogh and Cyrus Christie in addition to Duffy’s absence.

O’Neill said: “I have known John since his days at Sunderland when he was only a kid. He has earned this call-up. We’re telling lads that we’re watching them at club level to see what they are doing.”