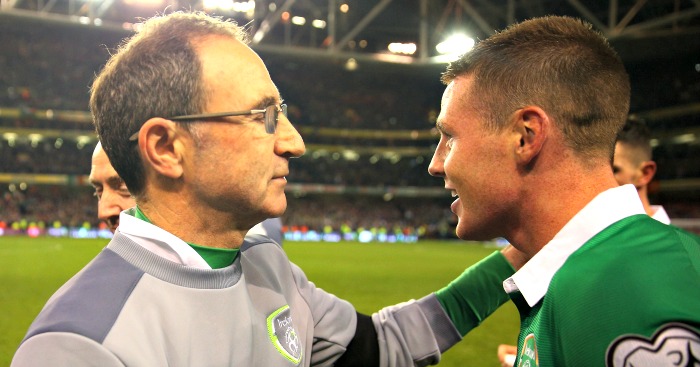 Republic of Ireland midfielder James McCarthy could go to the Euro 2016 finals even if he does not kick another ball in anger before Martin O’Neill names his squad.

The 25-year-old Everton player has not trained fully in Abbotstown this week and will not be risked in Friday’s friendly clash with Holland as he nurses a thigh problem which has been the subject of a series of scans.

However, having been reassured by his medical staff that McCarthy’s problem is nothing sinister, O’Neill has admitted one of the first names on his teamsheet will be in France even if he cannot play against Belarus in the final warm-up game next Tuesday evening.

The 64-year-old said: “If James doesn’t play in any of the two games, but feels that’s all it is – the scans have been pretty clear – yes, I think James has done enough to be in to be in the 23.

“He’s been a major part of proceedings and that would be a type of situation that I would certainly look at and feel, well, if this is just an injury that just needs a little bit of extra time, and he has played a lot of games for Everton…

“I watched him recently when he played very well against Watford, scored a goal and scored another goal just in recent times – not just that, but his overall performances were fine and he has had a run of games – then perhaps those extra couple of days might do him the world of good.

“That’s the situation. What I wouldn’t like is to be going in with two or three players whose fitness has been a concern, not just over a day or two, but over a period of time.”

Another man who seems certain to be on the plane is winger Aiden McGeady, who left Everton for Sheffield Wednesday on loan in January in an effort to keep his hopes of making the Euros alive.

His presence in Dublin this week came as something of a surprise with Wednesday preparing for the Sky Bet Championship play-off final, but head coach Carlos Carvalhal’s decision to dispense with his services has at least given McGeady time to throw himself into his international duties.

O’Neill said: “I think he’s been a bit disappointed the way the season has gone for him. He went out on loan in January with the Euros in mind – he could have sat back and maybe played the occasional game for Everton, but it looked as if he wasn’t going to get a look in and at least he made the effort to get out and play.

“For whatever reason, he is not finishing at Sheffield Wednesday, but at least he is here with us and I reiterate, he does have that ability to go past players and create something for you.”

O’Neill will not finalise his squad until Tuesday evening and insists there are places still up for grabs, and 40-year-old keeper Shay Given is hoping there will be one for him as he looks to establish himself as Ireland’s longest-serving player, something he will do if he wins a 134th cap to eclipse Johnny Giles’ record of 19 years and 202 days.

O’Neill said: “Shay, when he looks back on his career, I’m sure he will be absolutely delighted with it. He’s a very fine player.

“But like everything else, time doesn’t stand still for people. You do get older in this life, as I’ve found out. I would imagine this would be his final time, but he’s been excellent around about the place, for a start.

“I’m not saying that is everything – in fact, it’s not, you still have to have ability. I could get my daughters to be very good around about the place, but they might not make it.”