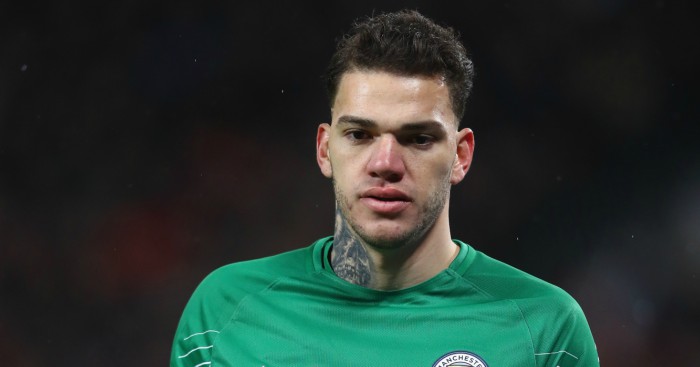 A middling week, with a number of fine performances in certain positions but several spots where we had to make do. Very few obvious choices in either case, so I’m probably due for a slating. We go again with a 4-4-2:

Goalkeeper: Ederson (Manchester City) An excellent week for keepers. Petr Cech, Fraser Forster and Heurelho Gomes all had strong games, with lots of good saves, punches and catches to go around. Jack Butland actually had the best collection of saves, and would have been the choice if he hadn’t been caught in possession by Harry Kane, which could easily have meant a goal. David De Gea chipped in with two beauties as well. But Ederson edges it with his ball-at-feet play, a textbook near-post save from Marcus Rashford, and the superb double save to preserve the win. You can say he didn’t know much about Lukaku’s shot, but you have to be in position and be strong, and to recover after a ball to the face like that was remarkable. First time on the list for him, because he rarely gets called into serious action, but City wouldn’t be where they are with Claudio Bravo in goal.

Right-back: Joe Gomez (Liverpool) As near to a flawless performance as you’re ever likely to get. Pushed the attack with runs, passes and crosses, and although not seriously tested defensively, made every play. Some of his performances this season have been overpraised, but this one was the goods. Even so, had Antonio Valencia contributed in attack to go with his excellent defence, he might have been the choice. Simon Francis came into consideration too, rampaging regularly up the wing and playing decent defence against Ruben Loftus-Cheek and sometimes Wilfried Zaha.

Centre-half: Jack Stephens (Southampton) A quietly impressive performance, particularly in the second half. Playing on the right of a three, he shut off Sead Kolasinac twice at crucial moments, marked Alexis Sanchez effectively, and dealt with everything that came his way. Showed excellent positional discipline as well. Was erratic as a newbie last year – is he ready to step up in class?

Centre-half: Angelo Ogbonna (West Ham United) The hardest choice of the week. All three West Ham defenders were in the running. Winston Reid did some strong marking and made key clearances after struggling a bit early on. Aaron Cresswell held his ground very well, and had he made a few more interventions, and hadn’t been beaten by Willian at one point, might have edged Ogbonna on the tiebreaker. But Ogbonna’s performance was just a small cut above. Playing in the middle of a three, he largely neutralised Alvaro Morata, and was effective both staying put and coming out. He’s really good at anticipating opposing passes: a few weeks ago, he recorded seven interceptions against Watford, and against Chelsea he got six. David Moyes appears to be building a solid defence, and Ogbonna could be the keystone.

Left-back: Arthur Masuaku (West Ham United) Played wing-back, not full-back, but spent more time defending than attacking. I’ve been dying to get him on this list, mainly because I love his looks. I love the way he plays, too, because he can be excitingly good and dreadful several times within a minute. In fact, he only gets in on the ‘one big mistake’ rule, having at one point played Alvaro Morata ridiculously onside for Chelsea’s best chance of the match. But otherwise he delivered the defensive goods, and made fools out of a lot of Chelsea players bringing the ball forward. (Eleven successful dribbles!) No one else was in serious consideration.

Winger: Son Heung-Min (Tottenham). The first name on the teamsheet this week. A scintillating performance against a helpless Stoke City. He really is the complete attacker: fast, instinctive, relentless and two-footed at the kill.

Winger: Johan Berg Gudmundsson (Burnley) A winger of the inside-out variety, he’s been in excellent form lately. A fine technical player and passer, superb at set-pieces. With Robbie Brady now out long-term, the onus is on Gudmundsson to provide quality from the wings, and he definitely did so against Watford. Provided the pass for Scott Arfield’s goal (don’t forget Jeff Hendrick’s dummy). Could have scored twice as well, but was denied on very good stops by Heurelho Gomes. Actually had a better game a few rounds ago against Arsenal, but the competition was too strong that week. Riyad Mahrez had several flashes of brilliance in an inconsistent match, and was worthy of the list as well, but lost out on the been-there-before tiebreaker.

Central Midfielder: Pierre-Emile Højbjerg (Southampton) Here he is again, and I remembered the slash through the ‘o’ this time. Rapidly playing himself into a starting role for the Saints. A player whom the word ‘cultured’ fits perfectly. So very cool on the ball, and rarely makes a positional mistake. But he can also put in the extra effort, as in an epic track-back to deny Alexandre Lacazette a great scoring chance. His 85 touches were by far the most of any Southampton player, and he completed – wait for it – 93.1% of his passes. He only turned 22 in August, and the crystal ball shows a lengthy career in the top flight.

Central Midfielder: James Milner (Liverpool) After I make my initial choices, I go online to see other opinions, because inevitably I’ll miss something. Boring James got mostly boring ratings, so I took another look.  He still belongs, although admittedly in a thin week. He was excellent in the first half, advancing the attack with almost every touch. Early in the second half he should have had an assist on a superb far-post cross for Mo Salah. Afterwards played deeper and was less involved, but still distributed the ball well. Although he did his best work on the wings, he played quite a bit in the middle too, and goes here for convenience.

I almost rearranged things to get David Silva in as an attacking midfielder, but he was only really in strong form for a period in the second half. Nice goal, though – that was harder than it looked. Both Wilfred Ndidi and Vicente Iborra of Leicester City are playing well these days, and are likely to make the list soon.

We move now to striker, where there were fully four excellent performances, all roughly equal in quality. Luckily for me, two had made the list before and two hadn’t, so I could use the tiebreaker. On the bench this time are Harry Kane, with one goal of strength and another of class, and Wilfried Zaha, who gave one of his take-no-prisoners performances against Bournemouth, winning two penalties. So now to the others:

Striker: Jermain Defoe (Bournemouth) For the first time this season he looked like the man who kept Sunderland up two years in a row. A cool set-piece finish and an outrageous strike from a narrow angle, plus all-around stretching and bothering Palace’s defence. A classic Jermain Defoe stat-line, too: 21 touches, only eight passes, four shots, three on target, two goals.

Striker: Dwight Gayle (Newcastle) Now here’s a guy I truly have never rated, and up until Saturday I would have given no chance as a Premier League regular. This was a super performance, though. He saw a lot of the ball, hooked up with his teammates consistently well, dribbled past several opponents, and got a well-deserved assist after a run to the byline and perfect cutback. His goal took a big deflection, but the overall showing was well worth it. More, please.