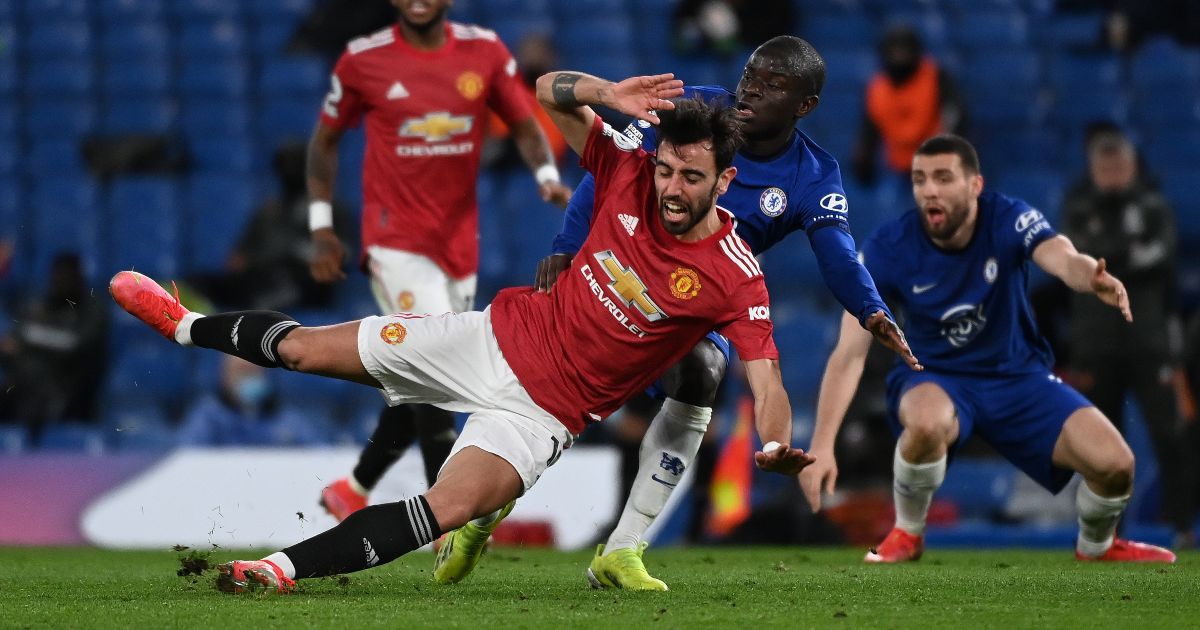 1) In the aftermath of a 0-0 draw between Chelsea and Manchester United, there is perhaps no better time to remind everyone that Frank Lampard has still won a Big Six Premier League match more recently than Ole Gunnar Solskjaer.

The Norwegian has presided over eight goalless draws in domestic competition as United manager: one against Liverpool in February 2019; two against Wolves in those classics at the start of 2020; five against Chelsea, Manchester City, Liverpool and Arsenal in the last four months. Their last league victory over one of those elite rivals came a week short of a whole year ago. The 6-1 defeat to Tottenham in October ranks barely behind the 1999 Champions League final as the games which have had the most indelible impact on Solskjaer.

2) With that said, this was a far more positive result than some of those other stalemates. Chelsea came into this game unbeaten under Thomas Tuchel and slowly improving with each fixture. That Champions League victory over Atletico Madrid five days earlier showed that they possess the blueprint for success in such games.

But Solskjaer countered the opponent effectively, his high press exposing the limitations of a 3-4-2-1 system that gives Chelsea stability at the expense of creativity. Mason Greenwood, Marcus Rashford and Daniel James brought energy while Olivier Giroud looked particularly isolated. Manchester United themselves should be expected to play with a little more attacking intent yet this was as close as they have come this season to striking the balance between safety and endeavour in such matches.

3) Chelsea should perhaps be more concerned about their performance in the context of this season. They were once again solid and restricted Manchester United to long-range efforts, but their own bluntness in attack has become a trend.

Since Tuchel was appointed, Chelsea are second in the Premier League table in terms of points but firmly mid-table for goals scored, level with Burnley, while no side has conceded fewer. When the assortment of forwards that either started or came on include players signed for £58m, £47m, £33.3m and £18m, that really isn’t good enough.

4) It reflects well on no-one that Antonio Rudiger was probably the game’s best player not necessarily for his commanding defending, but his desire to move the ball forward. After around six minutes he decided to venture all the way from centre-half to United’s box, slaloming through non-tackles on his way. One of Chelsea’s better opportunities also came from his sublime raking pass out wide to Callum Hudson-Odoi, whose wonderful cross just evaded Giroud.

Rudiger ended the game with more dribbles (3) than any Manchester United player. That Harry Maguire (2) came closest feels rather fitting.

Rudiger just running through Man U like it’s fifa 🤣 pic.twitter.com/iiiBKyFlix

5) Mateo Kovacic was probably Rudiger’s closest challenger for best player. There was one instance in the first half when he was given the ball about 30 yards from his own goal and facing backwards. Four Manchester United players smelled blood and surrounded him but Kovacic simply manoeuvred into space, maintained possession and opened up a gap through which he could coax a five-yard pass instead of either being dispossessed or launching it aimlessly. If you put him and the similarly press-resistant Georginio Wijnaldum in the same midfield it would be like watching those clips of two or three professional footballers playing against 200 hyper school pupils without ever losing the ball.

6) Aaron Wan-Bissaka deserves credit for playing himself back into the game after being pressed so well by Mason Mount early on. The Manchester United full-backs were clearly directed to push forward at any given opportunity early on but the engine of Mount prevented that on the right.

Luke Shaw faced no such opposition from Hakim Ziyech and he thoroughly enjoyed that space. He was again one of United’s more reliable attacking outlets, pitching in with more key passes (3) than any teammate. But one of his better moments was that early header to divert a Mount cross that was bound for Giroud. It was a fine all-round display, albeit not close to his recent best.

7) Chilwell made a similar contribution in the tenth minute when Manchester United broke on the counter. Bruno Fernandes found Rashford down the right and he managed to eventually get the better of N’Golo Kante before attempting a chip into the path of Greenwood. It required Chilwell at full stretch and excellently positioned to nod it to safety.

Those recent suggestions that he might not fit this Chelsea side were dismissed in 90 solid minutes. Ziyech’s poor finishing robbed him of the assist he probably deserved.

8) That moment was one of few that saw Fernandes benefit from being freed of the Kante shackles. This was one of the Portuguese’s more anonymous games as he otherwise struggled to rid himself of that constant shadow; Kante was poor on the ball but made seven tackles and four interceptions.

Fernandes has quite comfortably earned a few no-shows. It should come as no surprise that someone who has been bailing Manchester United out with unerring frequency of late can look a little spent. He needs so much more support. The frustration that met his pass in a three-on-three counter-attack rolling out of play for a throw-in after Rashford miscontrolled it was both palpable and understandable.

9) Don’t know why, in the context of similar situations this season, it wasn’t a penalty. Don’t really know why it was a free-kick in the first place, Mason Mount being penalised for Scott McTominay’s decision to try and sit on his head in mid-air. Don’t know why players from both sides were allowed to surround Stuart Attwell without being punished as he headed to the monitor to make his decision.

But if that moment receives more than a few glib lines of non-analysis like the above then quite frankly it’s a nonsense. Like Lewis Dunk blaming the officials after Brighton missed two penalties and had 15 shots but allowed West Brom to secure their first clean-sheet victory in 427 millennia, a little more introspection and original thought would be welcome.

If Sky dedicate more than five seconds of half-time analysis to that handball situation instead of actually getting to the point of why these two teams have been so shite then we should just give up.

10) The Ziyech chance that Chilwell forged early in the second half was the game’s best opening. After a really poor first 45 minutes the Moroccan was well-placed to score but had to put his finish either side of David de Gea. He did not get the connection he wanted, the keeper got a strong right hand to it and the moment was gone.

Ziyech had a strange game and probably benefited more than anyone from Hudson-Odoi’s half-time injury; he would surely have been replaced by Reece James or someone else instead. Yet despite looking like he couldn’t kick a ball properly at the best of times, he had more shots (3) and key passes (5) than any other player. If and when it clicks for him, those are the kind of numbers that help fans forget the regular losses of possession in key areas. It is also worth considering this was his first start in a month. The criticism, as ever, seems a little overboard. That lay-off to Mount for the one-two in the second half was worth another start on its own.

11) Not sure whether there was an agreement between the two managers to disregard everything and just sodding go for it midway through the second half, but eight of the overall 29 shots came in a ten-minute spell from the 59th to the 68th, and from some wonderfully unlikely sources: Kante, McTominay, Chilwell and Fred all had efforts in that short span before the relative tedium returned. It was like the exciting, compelling footage they save for the trailer to an otherwise drab and pointless film.

12) That Fred shot was actually the most fun for a couple of reasons: Solskjaer’s genuinely affectionate reaction of mild shock, the manager so overcome with emotion at the mere concept of him trying to score from range with his right foot and coming awful close that he just started clapping and laughing. And then there’s the fact Manchester United themselves were so stunned that they didn’t have another shot again until stoppage time, when Fred hit it straight at Mendy. Fred! Bloody Fred had United’s last two shots, 25 minutes apart, in a game against a direct rival. Amazing.

13) One legitimate criticism of Solskjaer might be that he waited so long to deploy his substitutes, and when they did come there was only one. Greenwood made way for Anthony Martial in the 79th minute after ploughing a lonely furrow all game.

In his defence, that bench did not offer too much inspiration. Donny van de Beek, Amad Diallo and perhaps Alex Telles aside, no-one was going to inject attacking impetus. Plus Solskjaer is actually statistically the best manager this season in terms of changing matches: his substitutes have scored eight Premier League goals (Cavani x3, Martial x2, James x1, Rashford x1, Van de Beek x1), which is twice as many as the next best in Jurgen Klopp and Chris Wilder. But the switch could surely have come sooner.

14) The pre-match discourse surrounding Martial was predictably tiresome. It is quite jarring to see Roy Keane and Graeme Souness criticise a player for not showing “emotion”. And as for the latter questioning whether the Frenchman would have been “disappointed” not to start, that’s bollocks.

15) The game’s defining seconds, the point that encapsulated everything that came before it, was provided in the final minute. Wan-Bissaka found Fred in the centre as McTominay embarked on a surging run behind the advanced Andreas Christensen and Chilwell. The ball was perfect. The Scot had James at the back post, Rashford in the middle and Martial on the right edge of the D all racing forwards as he measured up his options for the cross, choosing instead to fire it low for Kante to intercept.

Yet the move had not quite broken down; United still had the ball deep in Chelsea’s half. James collected a pass from Fernandes and again had numerous choices available to him, instead rolling it harmlessly out for a goal kick in search of the overlapping Shaw, unmarked five yards to his left. Two massive opportunities blown in less than half a minute through woeful decision-making and a lack of quality in the final third. That was the game in a depressing nutshell.

16) But it didn’t teach us a great deal (he says in his 16th conclusion). Solskjaer has work to do to devise a plan that works against opposition of this quality. Tuchel must figure out how best to assemble his attacking riches, perhaps sacrificing some of that defensive strength in the process. The key lesson over these 90 minutes at the end of a weekend during which the teams from second to (at least) fifth all dropped points was probably just how far ahead of the chasing pack Manchester City are. It suddenly feels a bit 2017/18 all over again: the gap after 26 games that season was 13 points to second-placed United. Three years later, the same teams in the same places after the same amount of matches are separated by 12 points and no less a gulf in class.