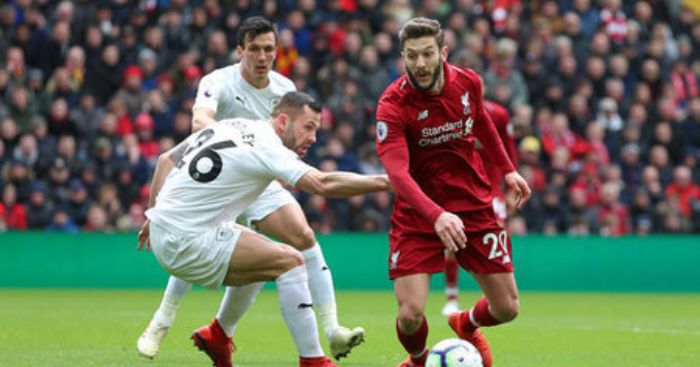 He might well have been exaggerating but you can see why Jurgen Klopp called the departing Adam Lallana a Liverpool “legend”.

It was windy, there were hailstorms and Liverpool had just gone behind to Burnley in a 12pm Sunday kick-off to further trail Manchester City in last season’s title race. Talk about squeaky bum time. This was a red alert with a similar shade of faces all round. Even uber cool Alisson lost his temper to get booked.

Jurgen Klopp had always hated midday starts, famously saying: “All English people will have lunch and we play football.”

To make matters worse for some Kopites, Adam Lallana was selected ahead of Naby Keita and Xherdan Shaqiri. He had not been involved in a single goal or assist that season. In fact, his last goal had been 659 days previously after two campaigns decimated by injury. He was a sidekick to Liverpool’s Batmen that seemingly nobody wanted. Or appreciated.

Liverpool and Jurgen Klopp are now the hunted…

Lallana had gained selection through his work on the training pitch that week. On this most unfavourable day when the title was slipping even further away, his particular box of tricks actually worked a treat.

With the scores level, Lallana’s counter press blocked Phil Bardsley’s attempted clearance following a moment of hesitancy from the full-back. When the ball broke away from Charlie Taylor’s challenge on Mo Salah, Sadio Mane fired sublimely into the corner. It was a complete game-changer and paved the way for the first of nine victories on the spin.

To say Klopp was appreciative of Lallana in the post-match press conference would be an understatement.

“He deserved that spot today – it’s not about who we bought in the summer or a summer ago. Adam was here when I came here and he’s an important part of the squad. He gives us creativity, he gives you the surprising passes, chipping balls through and we know he can do a lot more than he did today but for a first game that was quite impressive.”

Liverpool ultimately fell short of their Holy Grail but the momentum had been regained. Their supercharge from the end of last season to the Watford loss this year was almost exactly 12 months on from those swirly conditions against Sean Dyche’s northern army.

Lallana almost pulled them back into that fatal match at Vicarage Road, too, with a wicked strike that hit the post.

As Klopp announced that his favourite part-time technician won’t take any further part in games to protect a transfer, the German’s glowing testimonial was clear: “For now, I miss already everything about him and in this moment he is still here. He is an outstanding player and he is one of the most influential players on the training quality I’ve ever had in my life.”

Let’s be frank: Lallana has not always been universally loved by the Anfield faithful. Nor has it been a chorus of Dejan Lovren-style abuse. More just a roll of the eyes when he made the team sheet. After all, the 32-year-old was part of a squadron of Southampton players that have moved north over the last six years with varying degrees of success. Some haven’t quite worked out – Rickie Lambert, anyone? – while another, Nathaniel Clyne, left very quietly last week after training alone.

Lallana’s back story is complex. His fitness issues set him back after a golden period in Klopp’s second season at the club when his influence was becoming increasingly valuable. After that, it was two hard years without too much to show for it.

Bruno on pace for just over 9km is nothing. https://t.co/EjChOptih3

Even so, what Lallana brought went beyond match day. His influence was more vast than the decreasing cameos would suggest. If Simon Mignolet was the most solid professional Jurgen Klopp has ever worked with, then the midfielder wouldn’t be too far behind. After Lallana shepherded the vastly inexperienced ranks of youth to a 1-0 victory over Everton in the FA Cup in January, Klopp hailed his performance as “unbelievable”.

“The young players, when they talk about their most important things in the future, what happened in their first two years, they will mention Adam Lallana, 100 per cent,” he added.

If fans truly open their eyes, they can appreciate that the former England international had much more to him than a fancy Cruyff turn. At his best, he was a key player in a midfield three, gelling a tireless work ethic with a slick technique that could occupy the small spaces and runs in behind. His ball-playing touch was an alternative to the industrious midfield that fans also lost patience with – until Liverpool started winning trophies.

Further evidence was seen this season in two key games. It was the super sub who salvaged Liverpool’s unbeaten record in the dying minutes against Manchester United at Old Trafford when he stole in at the back post. Moreover, when the Reds started to struggle to hold on to a one-goal lead against Jose Mourinho’s Tottenham in January, his influence as ballast was key for the final half-hour. He completed 25 out of 27 passes, made three interceptions and killed a difficult ball stone dead to see out the game in stoppage time. There was substance to his stylish strut.

When Klopp joined Liverpool the former Saint lived next door. But it was on the pitch that offered the first memorable shot of Klopp’s “bromance” as the number 20 fell into the German’s arms after an 80-minute shift in Klopp’s very first game in charge at Tottenham.

While others cried off sick after the intensity of the initial training sessions under the new manager, here was a player willing to put in the hard yards. He even gave James Milner a run for his money on the lactate tests

Perhaps Klopp was overstating the case when describing Lallana as an Anfield “legend”. But he will be missed more than you might think. He was the shark that set the press in motion. Just ask Phil Bardsley.