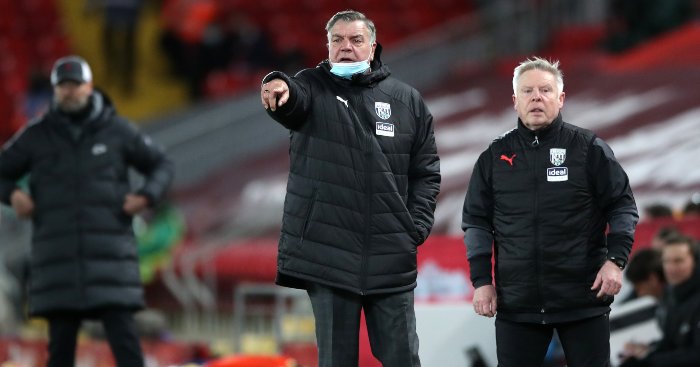 Everyone knew how Sam Allardyce would set West Brom up away at Liverpool. Except, seemingly, Jurgen Klopp.

By the time West Brom found their entirely deserved equaliser, the surgical mask that started just below Sam Allardyce’s nose and had slowly descended past a mouth furiously chewing gum for an hour and a half had doubled as a chinstrap. To be fair, it made it much easier to lipread him asking the football world whether they wanted lashings of gravy poured onto their generous servings of humble pie.

His Baggies provided a much more stern defence against this infectious Liverpool side than the fabric that ostensibly covered his face. Allardyce, the last visiting manager to win a Premier League game at Anfield, was not far from repeating that feat on Sunday.

That could not have seemed more of a distant possibility after the opening half an hour or so. Liverpool predictably dominated the ball and the chances, eight shots flashed in before West Brom had even one. Andy Robertson was a constant danger down the left and Sadio Mane’s goal was the sort of nimble prehensility we have come to expect and overlook.

But then came the lull. “I think in the first half an hour we could have lost the game, in the last 60 minutes we should have won it. In the end we get a point and that’s it,” was Jurgen Klopp’s assessment of the stalemate against Fulham a fortnight ago. With hard-fought victory against Tottenham and the crushing of Crystal Palace in between, this was an unwelcome inverse of a strong start followed by an inexcusably slow, flat and lifeless finish.

Curtis Jones will likely take the flak for committing the mistake which led to the concession of the decisive corner with ten minutes to play. Joel Matip’s injury-enforced substitution also disrupted the hosts’ rhythm. But for too long there was no real direction from Liverpool. They led at home with the support of a couple thousand fans against a team favourites to be relegated and still lacked control and cohesion.

Klopp sniped at the opposition’s approach as usual before accidentally landing on the crucial point. “I don’t think anybody can expect that a team play like West Brom with a ‘6-4’ (formation) in the first half,” he noted, adding: “To be fair, West Brom did their job exactly for 90 minutes.”

Liverpool irrefutably did not. And Allardyce’s cards were hardly held close to his chest. If anything, he prides himself on laying his hand on the table and still emerging with his share of the pot.

Allardyce is unbeaten at Anfield in his last 4 PL visits, each with different teams.

His last four trips to Anfield with different teams each time have produced 22 shots and conceded 70, with average possession of 25 per cent and, crucially, earned one win and three draws. West Brom defending deep and as a unit to keep the scoreline as close to level as possible before trying to capitalise on a set-piece was hardly M. Night Shyamalan levels of convoluted plot twisting.

Klopp would do far better looking within than blaming the other team and manager for daring to devise a tactic that successfully exposed their shortcomings. Liverpool’s substitutions were far too late to shift the momentum and Mane’s early breakthrough seemed to give way to a collective carelessness soon after, as if the main objective had been accomplished and only side missions remained.

This is no catastrophe: a three-point gap atop the Premier League table remains and Newcastle provide ample opportunity for Liverpool to properly stretch their legs in the next game after this stop-start slog. But the last three games in which the Reds have dropped points have come against the teams currently in 16th, 18th and 19th. The fear they once induced has given way to a genuine belief – and proof – that their foreboding armour comes with its fair share of chinks to exploit.

Allardyce might yet be the gallant knight that comes to West Brom’s rescue, or the man who finally falls on his infamous sword come May. But it says plenty that he has his squad playing to his tune so effectively in the space of 11 days while Klopp struggles to establish a consistent note from the band he has led for more than five years. The mask has obviously not slipped but he must be frustrated.