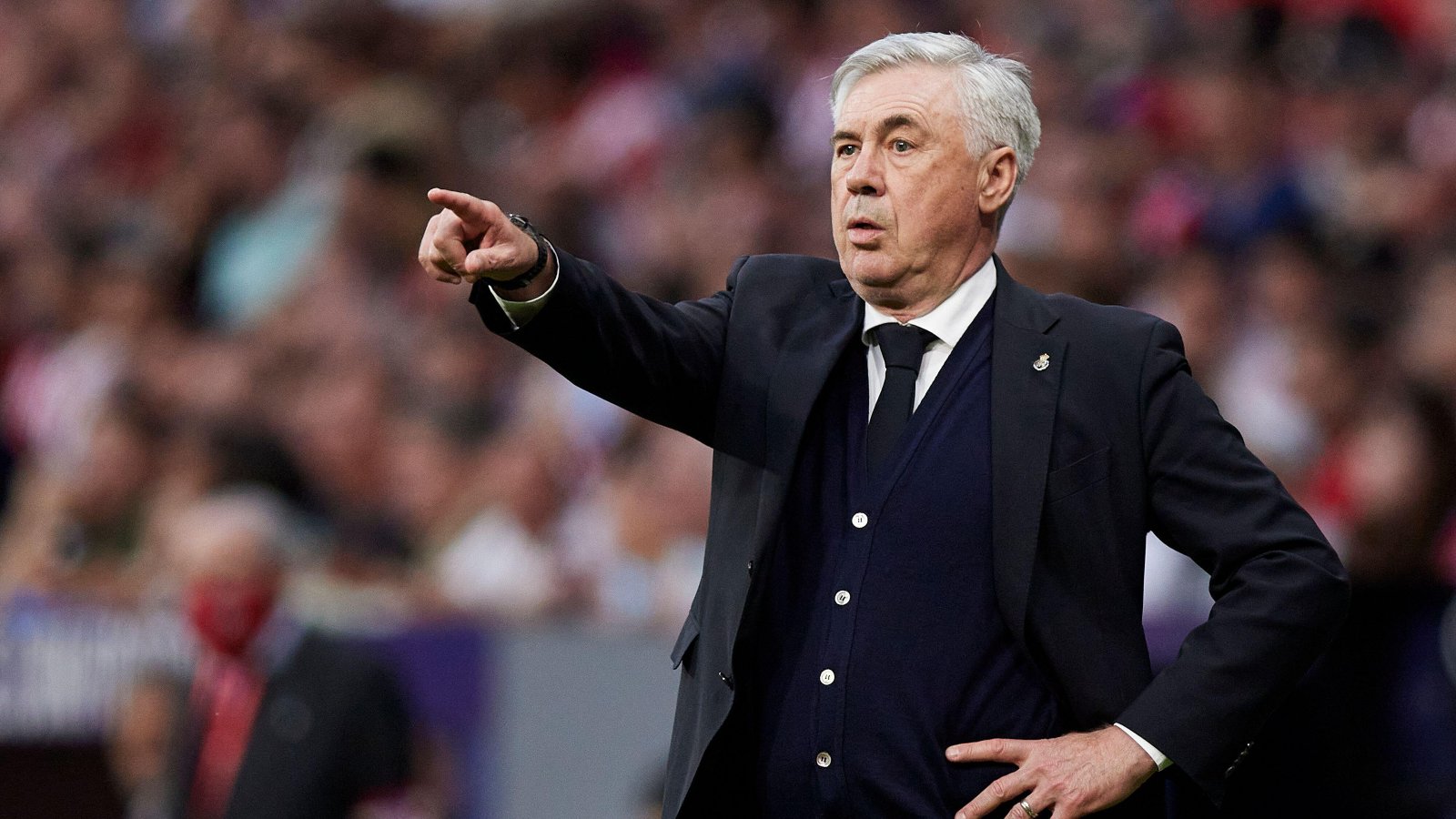 Carlo Ancelotti is a historically brilliant manager but he seems to understand more than most that coaching is about psychology, too.

Who’s this then?
Carlo Ancelotti is the 62-year-old coach of Real Madrid who leads his team into the Champions League final this weekend.

From 1976 to 1992 he had a very successful playing career as one of the best midfielders of his generation, starting at Parma in Serie C, then for Roma, winning four Coppas Italia and one Serie A. Then he moved to AC Milan and was part of one of the greatest European teams of the 20th century, winning back-to-back European Cups as well as two league titles (the second of which saw them go the whole season unbeaten) and a Supercoppa Italiana.

He was capped 26 times for his country and many will remember him at the 1990 World Cup, when Italy came third by beating England in a play-off. But his playing career was cut short by persistent knee knack and aged 33 he retired.

At this point he began to research coaching and was the assistant manager with the Italy national team under Arrigo Sacchi from 1992 to 1995, reaching the 1994 ‘divine ponytail’ World Cup final. That wasn’t a bad start.

He then made a move to Reggiana in Serie B for a single season, guiding them to promotion and then on to Parma, who he took to second in his first season and sixth in his second. However, the club didn’t win anything and he was sacked at the end of the 1998. Ancelotti rejected signing Roberto Baggio, feeling he wouldn’t fit into his 4-4-2 system, which he later acknowledged as a big mistake; Baggio scored 25 goals for Bologna that season.

There followed two seasons at Juventus with no silverware apart from the Intertoto and finishing second in Serie A. He was sacked and replaced by Marcello Lippi, who he had initially taken over from at The Old Lady.

His next gig was at AC Milan where he began to really make his reputation as one of the world’s greatest managers. Between November 2001 to May 2009 he took charge of 420 games. He won two Champions League titles and was runner-up in a third final. He added a Serie A win and a couple of cups to that total.

He left in 2009 for Chelsea, spent two years there and won a league and cup double in his first campaign. They were second the following year. Amazingly, that wasn’t good enough so he was sacked.

He then went to PSG for 30 months and won Ligue Un. In June 2013 he replaced Jose Mourinho at Real Madrid, immediately won the Champions League and Copa del Rey, delivering the club the much prized ‘Décima’, but by May 2015 he was booted out. Within five weeks he was installed as Bayern coach, replacing Pep Guardiola. In the 15 months he was there, he won the Bundesliga and a couple of cups but lost the dressing room and was given the auld tin tack.

There followed an unsuccessful 18 months at Napoli and another 18 months at Everton where he had a 46% win ratio, the worst of his career since Reggiana. Unsurprisingly, when the chance came last summer to return to Real Madrid and liberate him from Goodison Park, he took it. This season he’s won La Liga and the Supercopa de España and is in the Champions League final on Saturday, playing Liverpool. It will be the 1,227th game he’s been in charge of. He has only lost 232 of those and is the only manager to win all of the top five European leagues. If he wins on Saturday, he will also be the only manager to win the Champions League four times.

Not a bad CV, eh? He has a good claim to be the most successful manager of the 21st century and is certainly one of the best.

Klopp on Ancelotti: "Carlo is one of the most successful managers in the world and he's a role model in terms of how he deals with the success – one of the best people you could ever meet."

Why the love?
Carlo’s legend is built on two solid pillars. First, the sheer volume of big trophies he has guided clubs to. Second, his attitude in doing so. If you like your manager to be a ranter and raver, to be emotionally incontinent, or to do a lot of performative pointing, then you’ll probably think Carlo doesn’t have passion for the job. But for those of us who like adults to behave like adults and not hyperactive children, Carlo is our man.

It’s not that he doesn’t occasionally lose his temper, but usually, especially as he’s got older, he keeps his emotions bottled up. He confesses to getting really nervous before games and used to smoke during matches to ease his tension until it was banned. There’s no finer sight than a smoker on the bench.

Over the years, his left eyebrow has become more and more his main expressive tool, so much so that at times it appears to be an independent life form with a mind of its own.

His managerial style is somewhat unique in that he is the opposite of a control freak. Where the likes of Pep Guardiola, Antonio Conte and Jose Mourinho have always wanted their sides to work to a specific system and are manic about making sure the players obey their rules, on many occasions throughout his career Ancelotti has basically told his players to sort out problems on the pitch for themselves. That’s exactly what he did when at Milan with four world-class midfielders in Rui Costa, Andrea Pirlo, Kaká and Clarence Seedorf. So they did. Admittedly, this may not work as well with less stellar players but the principle of letting the players have ownership of such choices goes very much against the grain for most top managers. He did the same during the game against Manchester City during extra-time, asking substitutes Marcelo and Toni Kroos who he should bring on and take off.

Empowering players means feeling trusted and they are able to express themselves without fear of getting a bollocking for departing from the usual strictures. Ancelotti understands that much of the art of managing very good footballers is psychological: make people feel supported and it liberates them. By and large, Ancelotti is calm, relaxed and good-natured. Players say he makes them feel at ease and has a good sense of humour.

However, it would be wrong to say this relaxed attitude is the same as being laissez faire. He operates in a quiet way, never keen on self-publicity but makes big changes all the same. Madrid were in a mess when he returned last summer but look at what he’s done this season. While the old war horses like Modric and Karim Benzema have been fantastic, Ancelotti has fed a lot youth into the team to support them with the likes of Vinícius Júnior, Fede Valverde, Rodrygo and Éder Militão, all of whom are under 24, given regular starting places.

Throughout his career he has shown a lot of tactical flexibility after largely playing 4-4-2 at A.C. Milan and Chelsea, utilising a midfield diamond. Basically, he plays to his players’ strengths, which seems like a very good idea indeed.

Three great moments
What a goal number five is:

How he’s turned Madrid around

Future days
At 62 he may have a good 10 years in the business yet – more even. However, when you have won literally everything, what more is there to achieve? He could go into acting following his remarkable appearance in Star Trek Beyond.

The one role he has not yet taken is as Italian national team manager and that must surely be his next destination. It is far from the easiest of jobs, of course. They are as capable of failing to qualify for a tournament as they are of winning it. International management is a very different gig to club management but no-one has more respect in the Italian game than our Don Carlo. Also, isn’t it time that Italy was given a tournament to host?

It seems like he hasn’t made too many enemies in the game and his good-natured character may be a natural fit for the Italian job. It would be the perfect way to end such a great career by taking Italy to a Euro and World Cup final and win. That would certainly raise his and everyone else’s eyebrow.