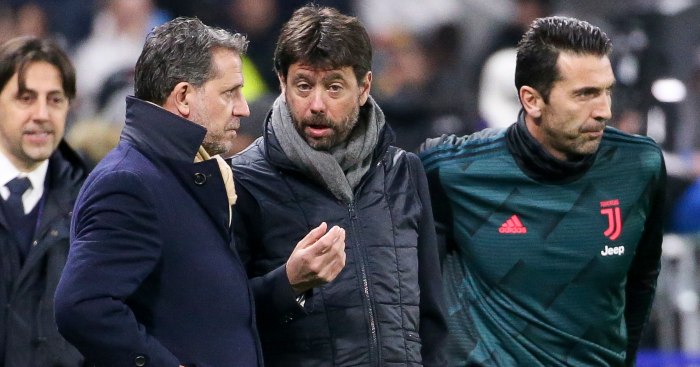 “I have great respect for everything that Atalanta are doing, but without international history and thanks to just one great season, they had direct access into the primary European club competition. Is that right or not?”

I think of Roma, who contributed in recent years to maintaining Italy’s ranking. They had one bad season and are out, with all the consequent damage to them financially.

We must protect investment and costs.”

Out of morbid curiosity, it would almost be worth granting Andrea Agnelli the power to unilaterally redesign the landscape of European football from 2024-25 onwards. It would be a disaster, of course. It would be a game-ending, soul-destroying nightmare that would divide future generations into one of fewer than eight fanbases. But it would be revealing.

What exactly would he create?

That’s a grimly fascinating question. Gating off the game’s elite within their own gilded prison would – most likely – have devastating consequences for football’s civilian tiers. Given that the commercial and sporting repercussions would be so dire and that the damage is so easy to foresee, anyone feckless enough to actually drive towards that cliff edge  is – by default – intriguing. And their ideas are even more so.

Just how brazen would Agnelli’s ideal solution be? How small would the group of clubs be to benefit and how would the iron-clad, undefeatable mechanism for rewarding them work?

And how would people react?

Perhaps the only comfort within this scenario, which seems increasingly inevitable, is that it might fail. There’s solace in hoping that the public would reject it and that the scheme’s architects would have to live out their days in shame, knowing that they’d ruined the world’s most popular sport, and turned it into one long, limp Mexican Wave.

It would become a never-ending pre-season. With Juventus playing Manchester United ten times a year. In front of fans eating popcorn and sushi. And listening to the Black Eyed Peas.

There would be some gratification in watching the demise of such a grotesque spectacle. A little bit, but not a lot. Maybe as much as there would be in watching a thief steal your car, but then crash it and die.

Ultimately, something too horrific to ever be a victory.

Agnelli has been on the board of the European Club Association (previously the G14) since 2012. In the eight years since, he has risen to become the organisation’s chairman, but also its singular identity. So much so, that whenever the future of the Champions League is discussed and the forces conspiring against its current format are mentioned, his is the voice of those threats.

Agnelli is the face of that movement, too. Historic wildcards. That’s him. Teams with unfavourable histories entering in the qualifying rounds. Him too. More games between the most famous clubs with the biggest fanbases. Agnelli again.

"It's outrageous. It's elitism!"

Graeme Souness responds to Andrea Agnelli's comments that questioned whether clubs like Atalanta should be in the UEFA Champions League. #UCL #VMSport#GoAtalantaGo #ForzaAtalanta pic.twitter.com/T5H3FPU72H

Last week, Oliver Kay wrote an open letter to him on The Athletic’s website. It’s a very good piece and its central premise is entirely valid: the conflict between who Agnelli seems to be and what he’s trying to achieve.

His affection for his club and for the sport are both genuine. In that regard, he doesn’t really fit the profile of the contemporary vulture – the type of modern executive that shows both a disregard for the sport and a brazen determination to extract business or political capital from it. That isn’t really in his DNA.

Which isn’t to be disingenuous. John Elkann is now the chairman of Fiat Chrysler and the chief executive of Exor, the holding company which owns nearly 70% of Juventus. Elkann is not only Gianni Agnelli’s grandson, but also Andrea’s cousin and the brother of Lapo Elkann, who is one of the more eccentric members of the family.

Fiat’s Jeep brand is still Juventus’s shirt sponsor and the club have always depended on the financial might of the Agnelli business dynasty. So, without question, there are aims here which exceed sporting ambition. There are tentacles which shouldn’t be ignored. But the focus in this instance is the person. Specifically, the contrast between Andrea Agnelli and his ECA peers.

They are characters largely drawn by cliché and coloured in our minds by what they represent. Nasser Al-Khelaifi is a member, for instance. The chairman of Qatari Sports Investments and the president of Paris Saint-Germain. Given what QSI are and the purposes PSG continue to serve, Al-Khelaifi is hardly someone who embodies the corinthian spirit.

Nor is Ed Woodward. He presumably enjoys football and likes the profile and attention it affords him – why else would he be so reluctant to recuse himself of sporting responsibilities at Manchester United – but he is a businessman. He is someone who has been trained to see sport in financial monochrome, to see how it can be exploited, and a person whose relationship with the game did not begin with 22 players and a ball.

But that type of character and the parties they represent are known commodities. In a sporting sense, they’re charlatans. They’re smart and bright and hugely successful, but they still wear their agendas like Texas belt buckles. They’re predictable because they so obviously view football as a tool rather than as a pastime and – somehow, for some reason – they seem like less of a threat as a result.

Maybe it’s because it’s so easy to treat everything they say or do as self-interest. Whatever the case, they are obvious enemies. As such, no matter what they achieve or how much money they earn, the game will always find a way to treat them as outsiders. People who can gather and hold power, but who can never really lead proper reform.

But Agnelli is more dangerous for exactly the opposite reason. He has all the credentials of an insider, right down to the lineage. He grew up idolising Michel Platini, he remains in thrall to the allure of football’s history and he is the grandson of a man who used to call Giovanni Trapattoni at 6.3o in the morning to talk players and tactics. As a result, be it a Super League, a decadent and perpetual round-robin, or matches being staged and televised from the moon, Agnelli’s ideas appear to come with that much more credibility.

You can imagine how he charms people with his charisma and how those tales of Gianni enrapture the game’s executives in their boardrooms.

And those ideas of his are not good. Within them lies the recipe for football’s ruin. The ECA’s objective is an expanded and semi-closed European competition, in which teams are continuously rewarded for what they were rather than what they are. They want a Monopoly board with no peril. A credit line with no limit. A game without competition?

It’s so difficult to imagine how a fan – a true fan – could ever think in the way that he does about a sport that he professes to love. But that’s precisely what makes him so dangerous. He is not like the rest of them, but he thinks like they do and wants what they covet. That makes his threat to the game unique. And terrifying.