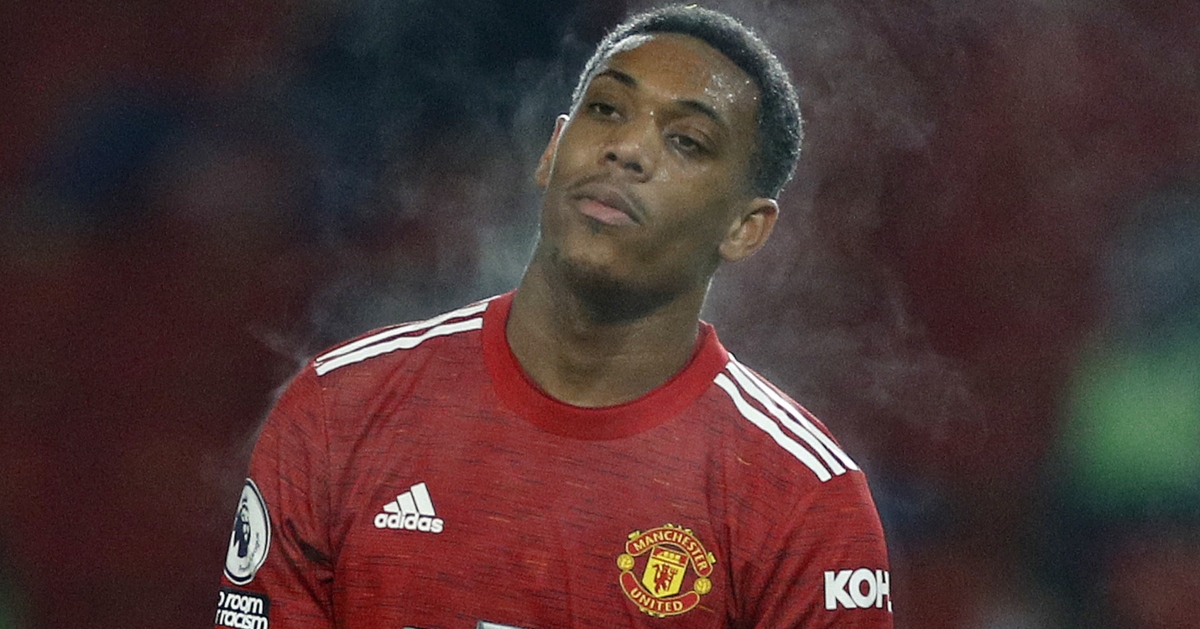 Glazer, presumably, carries the most weight of any member of Martial FC, a fiercely partisan group of fanboys devoted to their lord and saviour, Anthony Jordan Martial.

Indeed, it was reported that Glazer vetoed the wish of Jose Mourinho – Antichrist to the apostles of Anthony – to sell the striker during his reign at Old Trafford. Where Mourinho saw a player who was ‘mentally weak’, Glazer saw ‘United’s Pele’.

Now, as Martial heads for the airport bound for Sevilla, we should give Jose his dues. He was right about a few things at Manchester United and one of them was the France forward.

The ex-United boss has made his point twice. The first occasion, just before his third season went full Mourinho, saw him finger a number of players for their mentality.

“When we talk about Shaw, about Martial, about Jesse Lingard, about Marcus Rashford, we’re talking about boys with great potential but are still lacking – a word I can’t say but you like to say a lot – having that courage. They’re lacking a bit of this.”

Three-and-a-half years on, can any of those players – perhaps with the exception of Rashford, though his recent struggles have renewed some doubts – demonstrate they have found the cojones Jose was looking for?

Shaw finds himself out of favour once more having threatened to achieve his full potential last year, while Lingard has not impressed Ralf Rangnick any more than he did Ole Gunnar Solskjaer.

Mourinho pinpointed Martial once more when comparing his tendency to frustrate with France team-mate Karim Benzema.

“With Karim, it was not a conflict, I just wanted to help the player – an incredibly talented player – change his mindset, help him reach his maximum. To become a killer, a determined striker. I really enjoyed working with Benzema.

“Martial is a boy with a different personality. The thing I can say is that I hope he will reach a level commensurate with his real potential.”

We can all agree now, as United finally accept what has been staring them in the face, that Martial has not fulfilled that promise.

Maybe he might yet. Martial is 26 – hardly over the hill and still capable of magic in fleeting bursts. If what is holding him back is his mentality – as Mourinho and many others suspect – perhaps a fresh challenge and a change of scene will prompt the penny to drop.

But Martial FC cannot say that their icon hasn’t benefited from enough patience or opportunities to fulfil his potential at United.

Sure, he has his excuses. Not many players have blossomed in the post-Ferguson era at Old Trafford. More have floundered than flourished in the Old Trafford spotlight amid a backdrop of managerial changes and reboot after reset. But that’s what Mourinho was talking about. It takes bravery and determination to shine at Manchester United – it always has, and the same can be said of most of their rivals – but Martial just hasn’t got that innate drive or intense desire to make the most of his natural talents.

For outsiders looking in at Old Trafford, without being privy to the inner workings of Martial’s mind, what other conclusion can we draw? Especially after six-and-a-half years of willing him to succeed, only to watch him flit between increasingly irregular patches of form while generally carrying the demeanour of a man who isn’t much fussed either way.

Martial could get a pass on the less-than-enthusiastic body language if he had the record of a cold, ruthless goalscorer. But as the years have passed, he’s looked simply cold.

The former Monaco man has cracked double figures in the Premier League in only three of his six full seasons and he is yet to get off the mark this term.

Martial’s supporters will point to the 2019/20 season. When played in his preferred position as a No.9, the forward had his most productive year, scoring 17 goals and creating another seven, with 10 of those goal contributions coming in the nine games after the Covid break.

But Martial’s managers have all preferred him in a wider position. Martial stated in his opening press conference that he favoured a central role, something he has reiterated down the years, but Mourinho, Solskjaer and Rangnick all agreed with Louis van Gaal’s assessment towards the end of Martial’s first season: “I like him on the wing. I don’t believe he is an out-and-out goalscorer. In the future, he might change.”

Martial has not changed. He remains the same streaky striker who none of his managers have deemed worthy of their complete faith.

His chances have run out – for now – at Old Trafford, but Sevilla need the Martial from 2019/20. Julen Lopetegui has his side in second place in La Liga despite 18 players having scored more goals than Sevilla’s top scorer, Rafa Mir, on six.

The opportunity to kickstart a stalling career has to arouse the Parisian Pele like one of the pills the Brazilian original likes to push. Maybe Martial will discover in Andalusia that killer instinct that Mourinho tried to tease from him. Perhaps then he will return to Old Trafford and finally kick on for whomever takes their turn to manage the Red Devils next season.

But it seems more likely that, for Martial, this is the end of a United career that promised so much but has ultimately delivered too little.