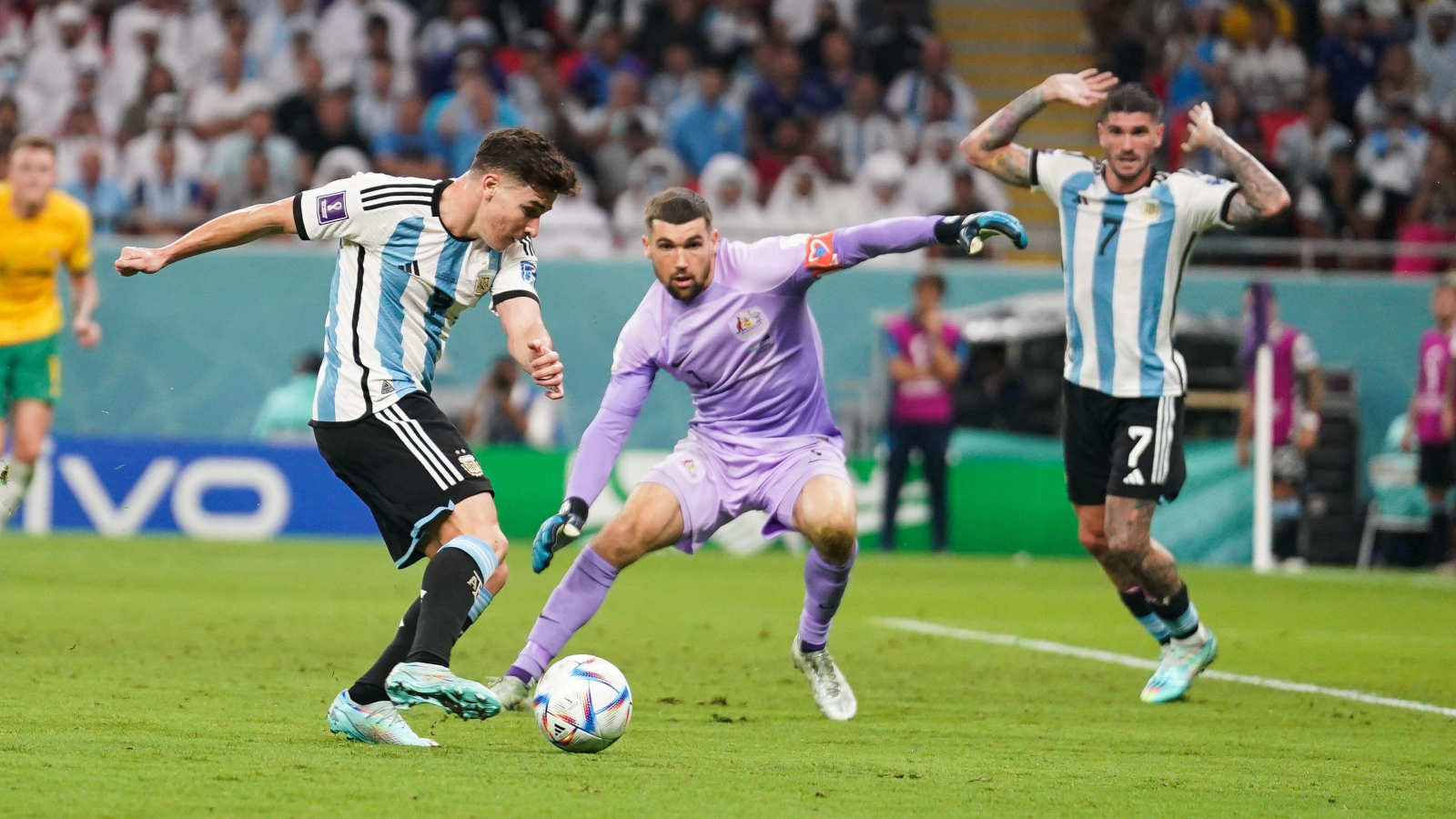 Argentina were the better team against Australia, but they cut it finer than they’d have liked after it looked like they were cruising through with ease.

In the end, football is a game of fine margins. Much of the clash between Argentina and Australia was a pedestrian affair of mis-placed passes and the ball moving primarily sideways.

But in the end there were four distinctly different moments which crowbarred open the gap between these two teams, and the sum result is that Argentina continue their slightly underwhelming progress towards the latter stages of the 2022 World Cup.

The first of these moments came from, of course, Lionel Messi. Messi had been an anonymous figure throughout much of the previous 34 minutes, but with ten minutes to play in the first half he received the ball on the edge of the penalty area from Rodrigo de Paul and placed it through a thicket of legs and beyond the grasp of the Australia goalkeeper Matt Ryan.

Was this Messi threading a camel through the eye of a needle, or might he have got a little bit fortunate? Could the Australian defenders have closed him down more quickly? It doesn’t really matter. The facts remain the facts. Argentina had a lead that their previous endeavours as a team had fallen short of justifying, and the mountain that Australia had to climb was growing incrementally higher.

He wasn’t party to the second moment that spun this game. That belonged to Ryan. It’s now been more than thirty years since the backpass rule was introduced, yet there remains a tendency on the part of some goalkeepers to treat the ball as though it’s a hot potato. It’s writ large in their body positioning when this happens. Outfield players redouble their efforts to close them down. Supporters of the goalkeeper’s team find their hearts unexpectedly in their throats.

On this occasion, Ryan was very much the architect of his own literal and metaphorical downfall. Receiving a backpass shouldn’t have been a major issue for the goalkeeper, but De Paul was straight on his back and as he turned past him he ran into Julian Alvarez, who managed to spin and get a shot across and into the empty goal. This sort of intelligence, that instant move to a razor-like press, is why these guys earn the big bucks.

Australia were due a little luck, and they got it with 14 minutes to play when a shot from substitute Craig Goodwin that would otherwise have flown comfortably wide cannoned off Enzo Fernandez and flew across the face of goal with Argentina goalkeeper Damian Martinez rooted to his spot. It was their fourth shot of the match. All four of them had been off-target until Fernandez’s unscheduled interaction.

But with this goal, something changed. Argentina had been defensively comfortable all evening, and their second goal had threatened to kill the game stone dead, but this slice of luck was not going to be treated as some mere consolation. With this goal, Australia started to develop a little bite. Their confidence seemed to visibly grow with the knowledge that by hook or by crook they were back in the game.

Six minutes after the goal they came desperately close to what might otherwise have been one of the great World Cup goals, the third of these very fine margins, and it would have come from a most unlikely source. Aziz Behich, the Australian left-back, took off on a run that saw him slide past four players before a last-second block from Lisandro Martinez prevented what would have been an astonishing equalising goal.

But the rigid structures that dictate so much of football tend to melt away in the last ten or 20 minutes of matches, and with the safeties having come categorically off, the whites of the eyes of the Argentinian players were clearly visible. Argentina did waste a couple of half-decent chances on the break as the game moved into seven minutes of stoppage-time, but even then there was an opportunity for one last piece of heart-stopping drama.

The final moment came with 20 seconds of those seven minutes left when the ball landed at the feet of Garang Kuol, who span past Nicolas Tagliafico and fired in a fierce shot that produced a brilliant save from Emi Martinez. It was one of those moments in which time seems to slow to near-freezing points, and the look on Kuol’s face said it all. In that moment, the final flickering flame of Australia’s involvement in the 2022 World Cup was finally extinguished. The final whistle blew seconds later.

Australia exit the tournament with their heads held high. They recovered superbly from a chastening 4-1 defeat to France in their opening match with wins against Tunisia and Denmark to such a point that in the final group table they were only separated from France on goal difference by three of the goals that they’d conceded against them. And they gave one of the favourites to win the whole shebang quite a run for their money, over that last 15 minutes or so.

But Argentina survived this late scare and are through to the last eight. Not for the first time in this tournament, they blew hot and cold for periods during this game and may need a better team performance if they’re to get past a Netherlands side who showed considerable nous in seeing off the United States of America in their match. They have the capability to do so. Messi is Messi, and he has the capability of dragging the rest of his team along with him.

The fine margins made the difference. Messi and the thicket of legs and Matty Ryan’s momentary lapse of reason seemed to have settled the matter, but Australia came back strongly towards the end, and Argentina have considerable reason to be grateful to both Lisandro and Emiliano Martinez for their defensive interventions, without which their team would have likely been forced into extra-time. Lionel Messi and Argentina’s World Cup adventure isn’t over yet, though the Dutch will provide stiff opposition in their next game.