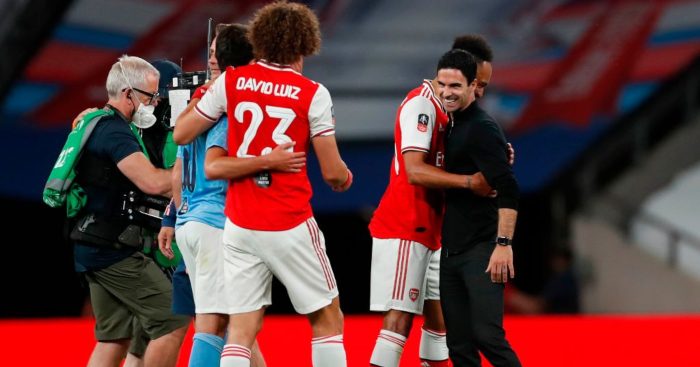 Arsenal ended their recent terrible record against Manchester City in some style as they produced a brilliant performance to put the defending FA Cup champions to the sword 2-0 on Saturday evening.

Pep Guardiola’s outfit had won the last seven meetings between the two sides before Saturday with Arsenal’s last victory in the fixture the FA Cup semi-final meeting in 2017. Since then, Arsenal have lost seven games, shipping 20 goals and scoring just twice against Man City. Arteta said before the game that he got “depressed” looking at the club’s recent record against big clubs. He went some way against City to fixing that record.

15 minutes into the game and there was the justified comment coming from the BT Sport commentary team that City were “dominating” proceedings thanks to their superior possession stats. Chris Sutton even went as far as calling it “alarming” on BBC Radio Five Live. However, as proved by Sheffield United, who had 22.9% possession in their 3-0 victory over Chelsea, it’s about what you do when you have the ball. And although it wasn’t quite as extreme as the Blades’ lack of the ball, the Gunners were able to slice through City’s defence on a number of occasions as they were by far the most dangerous side before the break.

David Luiz created the first proper chance of the game when his through ball found Pierre-Emerick Aubameyang bearing down on goal only for the prolific striker to hit the ball straight at Ederson. It was so unlike the Gabon international but it only took him four minutes to make up for it. The ball was played across the goal from Nicolas Pepe and Aubameyang was there at the back post with the most exquisite finish with the outside of his boot. Arsenal were swamped in the second half with waves of City attacks but a clinical counter attack on 71 minutes from Arsenal sealed their place in the FA Cup final. A ball down the left from Kieran Tierney saw Aubameyang one-on-one with Ederson and the striker cooly slotted the ball under the goalkeeper. Liverpool’s Mo Salah (68) is the only Premier League player who has scored more goals than Aubameyang (66) in all competitions since his Arsenal debut in February 2018.

The Gunners’ nightmare return to Premier League action – when they lost back-to-back matches against City and Brighton –  in June seems a distant memory now with their defeat in the north London derby their only major blemish over their last eight matches. A 3-4-3 formation has been used frequently in July with great rewards. Luiz was lambasted by fans and pundits alike following his nightmare performance against Guardiola’s side in their 3-0 loss at the Etihad Stadium last month. But the Brazilian was brilliant on Saturday, composed on the ball, creative, making a made a number of blocks and key headers. His role in the middle of a back three suits him perfectly – as showed during his time under Antonio Conte at Chelsea – but it was perhaps his high level of concentration that was most impressive at Wembley.

In fact, that was something that filtered throughout the whole of Arsenal’s defensive play against City with Arteta instilling a defensive resilience not seen for a long time. It was apparent in the second half in their stunning 2-1 victory over Liverpool in midweek but they were exceptional at the back for the full 90 on Saturday. There were still a few hairy moments for the Gunners with Shkodran Mustafi tackled in his own box by Raheem Sterling in the first half, while Hector Bellerin’s loose pass gifted Kevin de Bruyne a shot on goal. Some of that was down to Arteta encouraging his players to pass out from the back and it worked for the most part as an 18-pass move led to their first goal, with 15 of those passes made in their own half. A special mention also has to go to goalkeeper Emiliano Martinez, who was faultless throughout and superb with his feet. Bernd Leno, who has been one of Arsenal’s better players this term, will wonder how he will get back in the team when he recovers from injury.

18 – There were 18 passes made in the build-up to Arsenal’s opener in this game, with 10 of their 11 players being involved in the move for Aubameyang’s goal. Protégé. #EmiratesFACup pic.twitter.com/AarEt1LzqP

Arsenal’s front three of Aubameyang, Alexandre Lacazette and Nicolas Pepe can be as deadly as any forward trio in the Premier League on their day with exciting talents like Gabriel Martinelli and Bukayo Saka providing competition for places next season. Despite their brilliant defensive performance as a team against the Citizens there are still big question marks over a number of personnel in their defence. With the likes of Rob Holding and Sokratis Papastathopoulos providing back-up to Mustafi – who also comes under heavy criticism – and Luiz, Arteta will have to bring in defenders this summer. It’s likely that new signing Pablo Mari will play a bigger part next campaign, while William Saliba  – who has spent the season on loan at Saint-Etienne – will come into Arteta’s thinking.

The Spanish boss thinks the Gunners will have to take a financial “risk” if they are to get back into the Champions League, Arteta said on Tuesday: “If I [the club] do want to invest and risk, and then I don’t reach it, what happens? So at some stage you have to make a decision, whether I want to aim to make that gap closer and go for it, or stay where I am.” There was brilliant confidence in Arsenal’s play at Wembley and if they can bring in better players they will surely flourish under the Spaniard’s coaching. Arteta has earned Stan Kroenke and the board’s faith. The youngest manager in the Premier League is certainly worth the risk.