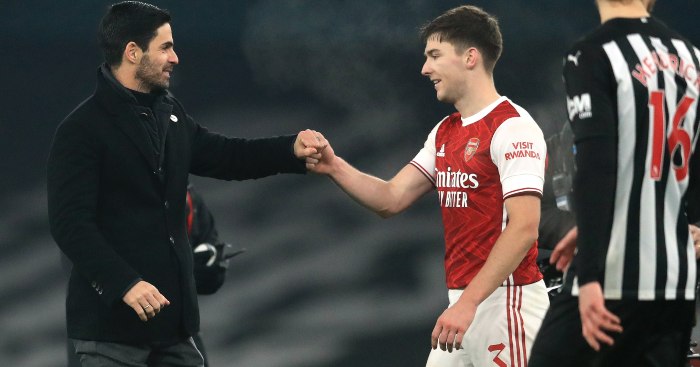 Just over a year into his Arsenal reign, Mikel Arteta was asked this week if he knew his strongest XI.

“As a manager, you have a team in your mind,” he said. Which served to heighten the importance of the Gunners’ FA Cup third-round clash for those who faced Newcastle but remain firmly on the periphery of Arteta’s thinking.

Here was an opportunity that a few on the fringes barely deserved and the performances of Willian, Nicolas Pepe, Joe Willock and Reiss Nelson will only serve to strengthen Arteta’s belief that he has found his most effective formula without them.

After three games which shifted the gloom from around the Emirates, the performance in the drawn-out win over Newcastle was a reminder, not that it was needed, of how stodgy Arsenal can be. Having seen youngsters like Emile Smith Rowe and Bukayo Saka reinvigorate Arteta’s side with their energy and creativity, their more experienced stand-ins looked nervous and inhibited.

Indeed, Willian appeared a broken man. The reverse Smith Rowe. While the youngster’s involvement in Arsenal’s resurgence is no coincidence, nor is the Brazilian’s absence.

Arteta finally ran out of patience with his highest-profile summer signing before the visit of Willian’s former club Chelsea on Boxing Day, when Smith Rowe came in for his first Premier League minutes of the season. Suddenly, the Gunners had penetration, creativity and, for the first time in too long, the hint of a swagger.

Willian came in tonight in what is now the Smith Rowe role, the No.10 charged with providing the ammunition for the Gunners’ leading hitman. His sole contribution was a single shot off target. Not a chance created, not a dribble completed.

“He will have an instant impact,” said Edu upon Willian’s arrival, and he was half right. Willian was outstanding on his debut on the opening day at Fulham. Since then, the Gunners have had nothing for their £200,000-a-week investment.

Willian has had just two shots on target across all competitions since joining Arsenal.

The 32-year-old may offer some mitigation based on the role he is being asked to play. Willian is – was – at his best on the right flank. That is now Saka’s domain. But even in the absence of Arsenal’s player of the season so far, Willian was instructed to play inside, before moving to the left when Smith Rowe was introduced before the hour mark. Whatever the role, though, what Willian is offering is nowhere close to good enough.

The same can be said for £72million Pepe, though at least he created Arsenal’s best chance for Willock, who summed up his performance in midfield by putting his free header in the centre of the goal into the ground, allowing Martin Dubravka to make a comfortable diving save when the Newcastle keeper should have been bypassed with ease.

Willock and Reiss Nelson may find their best opportunity of playing more games this season away from the Emirates. Nelson was a late inclusion after Gabriel Martinelli was injured in the warm-up and the winger looked as though his call-up had caught him cold. Having not been included in Arteta’s last seven matchday squads, Nelson offered no penetration on the left, leaving Kieran Tierney as the Gunners’ only outlet on that flank.

READ MORE: Arsenal centre-back among five back from the brink

The thinking behind Arteta’s rotation was sound but the execution failed. In the end, Arsenal had to play 120 minutes – for that they should be grateful after Andy Carroll wasted a chance in added time to end the hosts’ trophy defence at the first hurdle – and it was only settled when the three players Arteta wanted to rest, Smith Rowe, Saka and Alexandre Lacazette, combined to provide the game’s lone moment of real quality.

Pierre-Emerick Aubameyang’s late tap-in should also serve as a shot in the arm for the out-of-form captain.  At least he will retain his place on the left. It will be a while before Arteta’s other tweaks are repeated.

So there will be no headache for the manager before the trip to Crystal Palace on Saturday night. The team in his mind will be even clearer than it was before. His only concern will be how to remedy his stand-ins’ slump.