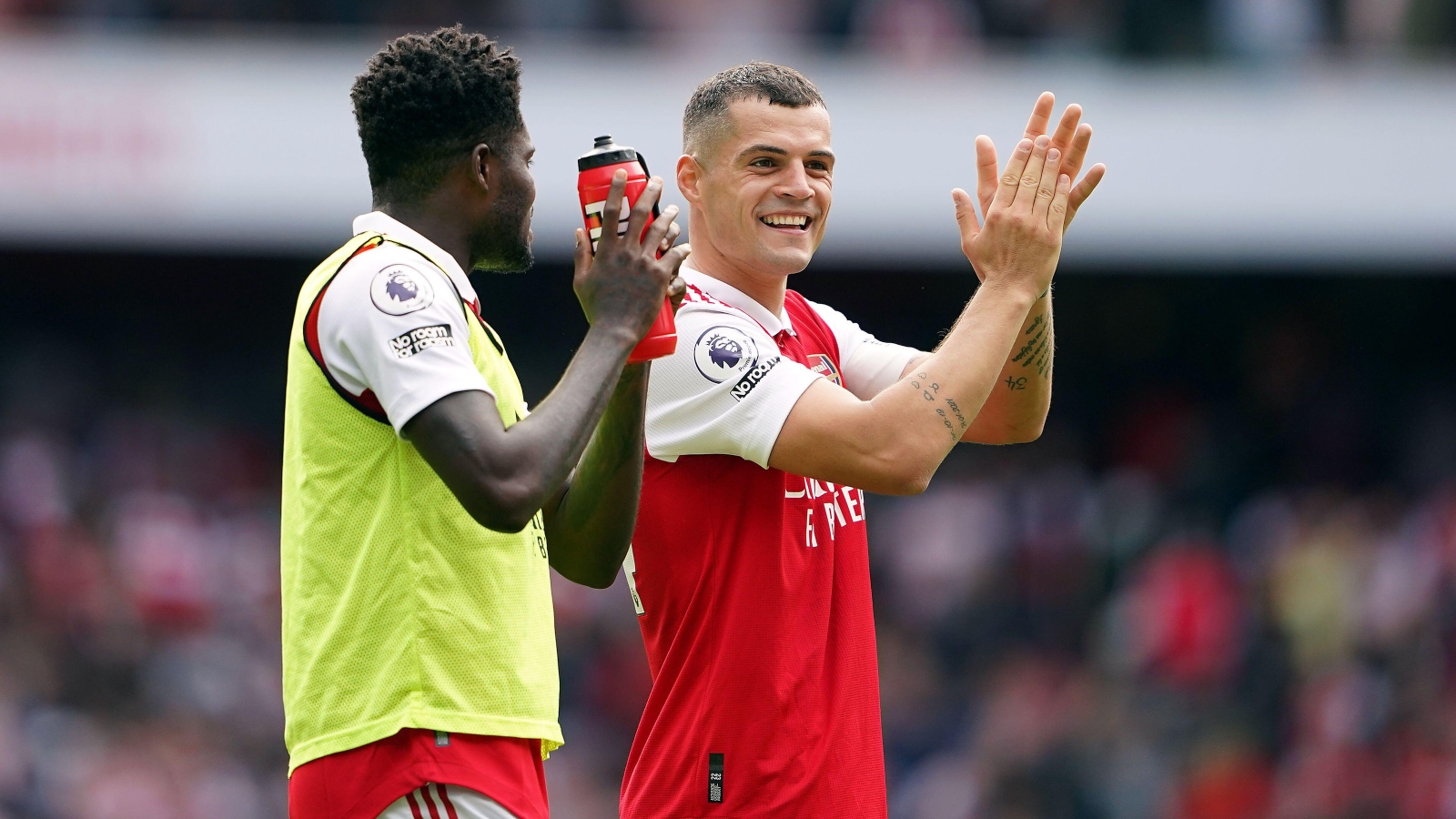 This Granit Xhaka remontada is no joke and he deserves his flowers after years of criticism from Arsenal fans, rival fans, pundits and journalists. It’s time for pretty much everyone to enjoy a nice slice of humble pie.

Six years ago, Arsene Wenger described Granit Xhaka as a “box-to-box midfielder”, yet he was largely deployed as a deep-lying midfielder, breaking up play and trying to keep the team ticking over as the first man in front of the defence. This iteration of Xhaka was found out defensively and did not have a huge impact on games, though he remained a player Wenger, then Unai Emery and latterly Mikel Arteta, heavily relied on. At times they had no choice.

I was one of many Arsenal supporters who believed the team would be better off without the Switzerland captain and even suggested that starting Albert Sambi Lokonga at the beginning of last season was the perfect way to ‘ease’ Xhaka out of the starting XI. I went to the north London derby last September hoping that Xhaka would not start, and I was not alone. Fans were not too happy to see him named in midfield but he played well before going off with a knee injury that would rule him out for a few months.

Fast-forward a little over 12 months and I wouldn’t swap the 30-year-old for a single player in world football. You might start throwing the names of Kevin de Bruyne, Federico Valverde and Scott McTominay at me, but sentiment and a narrative arc wins; if one man deserves such a comeback it is Xhaka.

Everyone knows what has happened in the past with the Arsenal fans, so I will not bore you with the details, but it is fair to say that the majority of us saw no way back for the former Borussia Monchengladbach midfielder when he was stripped of the captaincy for telling the club’s fans to f*** off before ripping his shirt off, throwing it on the Emirates turf and storming down the tunnel. He didn’t play for three league games after that bizarre day against Crystal Palace in October 2019.

What made Xhaka even more frustrating was seeing him run the show for Switzerland on a consistent basis. His performance against France at Euro 2020 was absolutely ridiculous; seeing him play like this only to look relatively average at club level was demoralising at times.

Many stuck by Xhaka through thick and thin, while even more wrote him off at some juncture between 2016 and 2022. I’d love to say I was one who did not write him off, but that would be a lie. I was full #xhakaout.

This is what makes his form in 2022 so bloody sweet. Seeing him wear the captain’s armband again while dominating midfield is pure poetry.

It is hard (for me) to look past Xhaka when picking the best player in the Premier League this year. And this is not a joke despite De Bruyne helping Manchester City win their fourth title in five years.

We do have to acknowledge that a lot of Xhaka’s influence comes down to Thomas Partey, who is Arsenal’s most important player. The Ghanaian gives Xhaka the freedom to thrive in his box-to-box attacking midfield role and his absence – which is extremely common – is very noticeable.

The 30-year-old’s four goal contributions this term are more than he has scored or assisted in each of his last three seasons, and we are only eight games into 2022/23. He scored his first goal against Tottenham on Saturday and was named man of the match after another outstanding performance. His assist for Gabriel Jesus against Brentford was perfect and his goal and assist against Leicester in the 4-2 win got the Gunners over the line. Without Xhaka playing as the box-to-box midfielder Wenger signed, the Gunners would not be top of the table.

Xhaka being utilised by Mikel Arteta in this No. 8 role has become more noticeable in 2022. Getting into the box, carrying the ball forward, utilising his stamina and durability and creating chances, Xhaka is doing everything required to be a world-class midfielder. People think of Martin Odegaard as a No. 10 or Arsenal’s primary attacking midfielder, yet he is operating in similar positions to Xhaka.

Arsenal were one win away from finishing fourth last season, and one of those fateful defeats came at home to Brighton, when Xhaka was used as a left-back – one of the few tactical mistakes Arteta has made in the last nine months. It is now difficult to envision him filling in at left-back again, unless there is a horrible injury crisis. And I mean horrible. There would need to be injuries to at least four specific players.

Xhaka has never excelled defensively and it is clear to see that tackling is not his forte; his new role is thankfully limiting that aspect of his game. In 20/21, the Swiss averaged 2.07 tackles per game, with a strong success rate in the attacking third, but poor in the middle and at the back. Fast-forward to this term and Xhaka is averaging a lot fewer tackles per 90 (0.63) and is in the top echelon of central midfielders for some noticeable statistics, including assists, goals, non-penalty expected goals, key passes, passes into the penalty area, shot-creating actions, carries in the final third and into the penalty area, progressive passes. He is also committing 0.5 fouls per game, which is the third lowest for his position (below Christian Eriksen and Pascal Gross). For context, Scott McTominay is committing 3.17 fouls per game.

Obviously De Bruyne, Bernardo Silva and Rodri are absolutely phenomenal, but just look at this rise like a phoenix from the ashes. Granit Xhaka is a fantastic midfielder and an extremely important player for the team at the top of the league. Seeing him lift that Premier League trophy in May will be one hell of a moment (if we continue to ignore Manchester City).