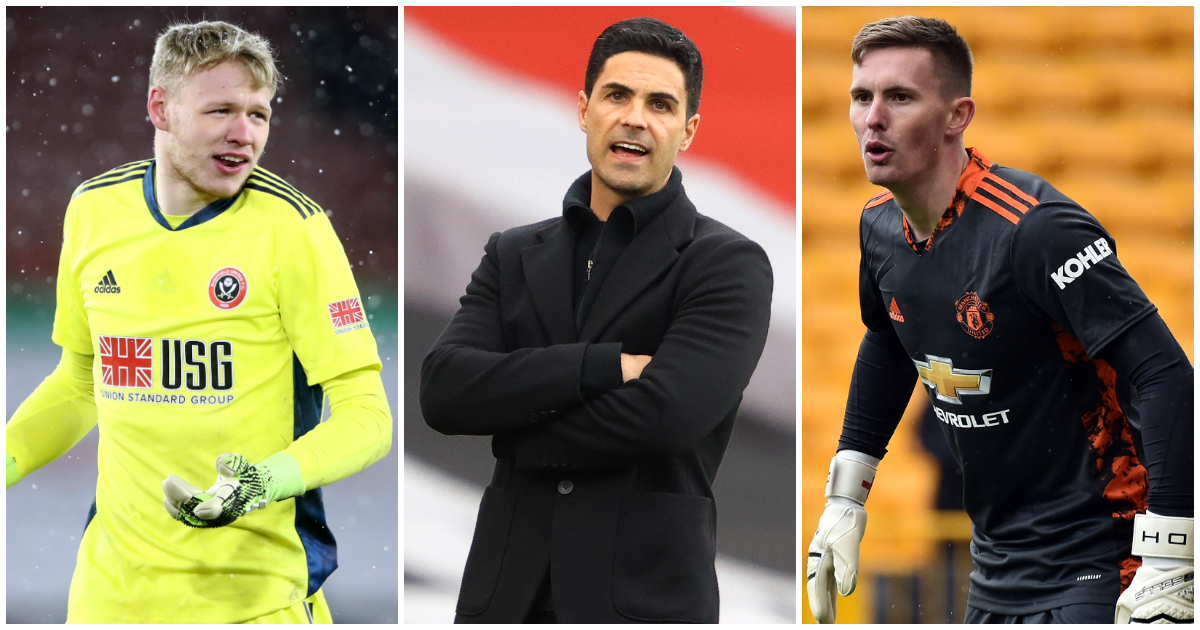 Arsenal have a problem. Actually, they have several, one of them being the need for a new goalkeeper.

That’s the view of Mikel Arteta at least, despite the presence of a Germany international on his books. The Arsenal boss went all in on Bernd Leno a year ago when forced to decide between him and Emiliano Martinez. It looked for all of last season that Arteta made the wrong call, much to Aston Villa’s benefit, and Arsenal’s pursuit of a new stopper is the manager’s acknowledgement of that mistake.

Manchester United have a problem, too. They have two goalkeepers to guard Ole Gunnar Solskjaer‘s net. There is an argument to suggest that the Red Devils should also upgrade, but for now, priorities lie elsewhere and Solskjaer has a headache simply deciding between David De Gea and Dean Henderson.

The two United keepers spent last season engaged in an audition for the role of Solskjaer’s long-term No.1. De Gea started in the ascendancy, then Henderson took over. De Gea made a last-gasp claim on the goal he has kept for the last decade, but come the end of the season, Solskjaer’s mind was no clearer.

De Gea’s massive salary complicates the matter. If Solskjaer was to put his faith in Henderson going forward, shifting the Spaniard would be tricky. As United’s best paid-player on a contract the club now regrets agreeing to, no other team will be willing to get even close to matching the terms he currently benefits from at Old Trafford. Which means a loan exit is the most likely solution should De Gea find his services in sparse demand this season.

Selling Henderson would certainly offer United a cleaner break. The England international may have only played 13 Premier League matches for United but his stock is high. Unfortunately for the Red Devils, demand for goalkeepers this summer is low.

The only big club looking for a new No.1 this summer appears to be Arsenal. If only there was some way of solving both clubs’ problems in a way that would mutually benefit each other.

From Arsenal’s perspective, if they are looking for an England goalkeeper, why not buy the best available?

At present, they appear to be angling for a deal with Sheffield United for Aaron Ramsdale. If experience in the Blades’ net is actually a strange pre-requisite, then Henderson can point to a more stellar record than Ramsdale.

Sheffield United are reportedly seeking a fee in excess of Â£30million for their current keeper, which is obviously crazy. If Arsenal were to meet the Blades’ recent demands for Â£32million, England’s fifth-choice keeper would become the fifth-most expensive goalkeeper in the world. Ever.

Such a valuation is hardly Ramsdale’s fault, nor can Sheffield United be blamed for seeking a decent profit on a player they signed only a year ago for Â£18.5million. But there is no good reason for Arsenal to be the patsy in this particular deal.

Such a figure spent on Henderson would be easier to justify. The Man Utd academy graduate has played slightly fewer Premier League games but at 24, a year older than Ramsdale, can claim to have more experience. Henderson has been capped by Gareth Southgate and has played around a season’s worth of league matches more.

Henderson has also played European football, something Arsenal hope to do again sooner rather than later, and is more accustomed to playing in the manner Arteta would expect.

Ramsdale’s average pass was 53 yards in length, with Henderson’s 35 yards. Leno and Ryan passed for an average of 29 and 26 yards respectively.

Spending such a sum on Ramsdale to then ask him to play an entirely different game to the one he is used to would be a needless gamble on Arsenal’s part.

And the Gunners could certainly squeeze United over Henderson. The Red Devils will struggle to refuse Â£30million for a goalkeeper who cost them nothing but could depreciate on the bench as things stand. Henderson’s ego might also become a problem if he is made to sit and watch De Gea again this season.

The 24-year-old’s widely-renowned self-belief is certainly as asset as a No.1 goalkeeper. As a stand-in with international ambitions, Henderson may struggle to keep a lid on it if Solskjaer places his faith elsewhere. The United goalkeeping coaches already have a daily balancing act to protect egos before either of their main men has their nose put out of joint.

Solskjaer would be spared the dilemma of choosing between his two goalkeepers, while whatever fee Henderson might fetch should go back in the kitty for Kieran Tripper and a new midfielder.

United may be reluctant to strengthen a rival but the Red Devils would have more to gain by cashing in on Henderson now. All they need is Arsenal to recognise the opportunity.