Home F365 Says Arsenal crash back down to Earth – but were they that high? 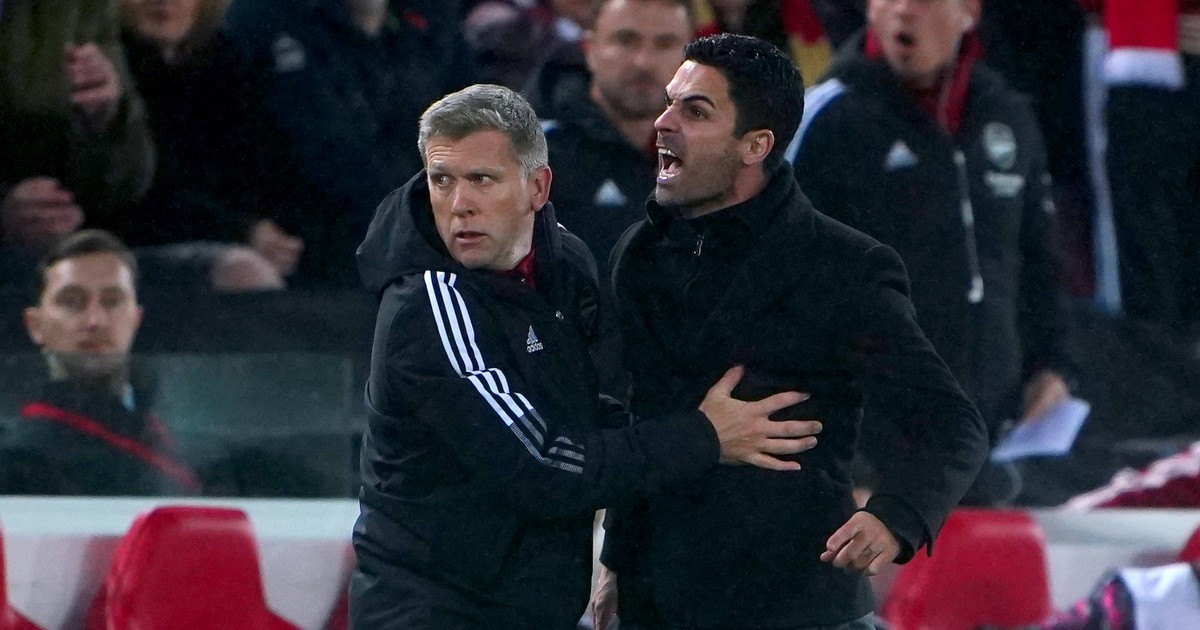 Arsenal may feel as though they crashed back down to Earth with a bang at Liverpool, but they were never really that high in the first place.

So it’s official. The only thing more capable of dominating the football news cycle than the generational question of when the Manchester United manager will lose his job, is the Manchester United manager losing his job. The past couple of days have been a blur of pre-drafted eulogies, what-next think-pieces and United fans “expressing themselves” on social media with the balance and clarity typical of the past few months. So all-consuming has it been, you could be forgiven for thinking a royal has died. And that’s without considering the weird Prince Andrew energy to that interview.

Sad as it all is, there is one man who you would imagine will be very pleased indeed. Delirious with gratitude at the latest explosive episode to drop from the Old Trafford Broadcasting Corporation. That man is Mikel Arteta.

Not because he has some bizarre grudge against the nicest bloke no longer in football. And not because he now finds himself the sole survivor, the last man standing in the Unqualified Former Player Leads Big Club reality show. But because his Arsenal side just got tonked at the weekend, and nobody has even noticed.

Now let’s have this right. There’s no shame in losing to Liverpool; Liverpool are very good and this is the eighth time this season they have beaten a side by three goals or more. Nor were Arsenal especially poor, particularly in the first half. They were, in fact, comfortably containing Liverpool, right up until Arteta and Jurgen Klopp – two of football’s self-styled nice guys – went all inflatable flappy arm guy and had what you would probably call a dust-up, revving the Anfield crowd into life in the process. Or something.

However, the fact remains that, whatever you want to say about transitions and being realistic and such, Arsenal got easily and comprehensively beaten 4-0 by a side that they at the very least aspire to be a rival to. And however well they set themselves up early on, the gulf in class was abundantly clear by the end.

This should not necessarily be news. Yet, what with their dreadful start making way in recent months for an eight-game unbeaten league run, and the burning smell emanating from both United and Spurs artificially enhancing the scent of roses everywhere else, there had been a sense that there were grounds for earnest optimism. That from the ashes of the post-Wenger years, an Arteta-built phoenix was rising. A graceful, efficient creature, powered by Aaron Ramsdale’s heart and Albert Sambi Lokonga’s lungs and Takehiro Tomiyasu’s long legs. With Bukayo Saka’s face.

Yet it isn’t. Not really. And it never really was. Somewhere amid the 1-0 wins, the couple of lucky breaks and some borderline-quantum goalkeeping, lies the reality: Arsenal are alright. They have some good players and some less good players, operating in some semblance of a system. They will probably beat more teams than beat them; they will probably finish around the European places.

And this is not to be sniffed at. Being among the seven best sides in the best league in the world is a thing. More than a thing: there are literally thousands of clubs in England who would do anything to raise themselves up to that level. Just look at what Newcastle have gone and done, the naughty little rotters. Yet for Arteta, at a club like Arsenal, this long into his tenure, is it enough? The answer is surely a resounding nope.

As a historic™ club, backed by the obligatory billionaire owners, with a super-shiny 21st century mega-stadium, the ceiling of their ambition must be higher. Their participation, front and centre, in April’s botched attempt to save the game from whatever hell we are now forced to endure, seems to attest to this. So, too, the fact that the only team to match their net spend over the past two summer windows is… yup, them again.

In short, the ambition is there. As is the investment to back it up. Yet what it and almost two years of Arteta have so far amounted to is one FA Cup, a Community Shield (yay!) and a squad of players that feels like it has been assembled on an old version of Championship Manager: plenty of exotic names, apparently quite highly-regarded, but you’ve no idea what most of them look like or what they really do. Just names flashing on a screen. Words with numbers attached. And, perhaps most damningly, this feels about right. This is no longer a club in decline but one that has ossified, settled into what intuitively seems to be its rightful position, somewhere between fifth and eighth.

The board are unlikely to echo this view. With all that money spent, and the supposed silver lining of having their Thursday nights in Islington as opposed to Istanbul, this was meant to be the year that things came together. The year that upward mobility, at least, was secured.

For a little while yet, the United bin fire will carry on burning. As the chaos slowly subsides, and the extent of the damage is assessed, the wreckage will continue to be strewn across our Twitter feeds. But there will come a point relatively soon when things settle back down into something approaching normality. Arteta must hope that he is ascending when they do.