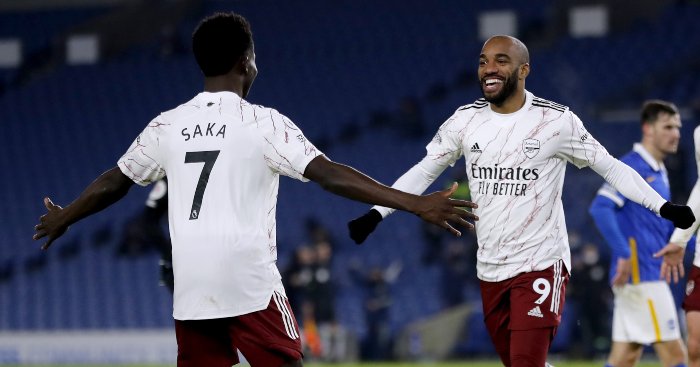 Bukayo Saka being this important to Arsenal at 19 is not normal but also should not be overlooked. He really is quite spectacular.

When it rains, it pours. Except in football management, where it absolutely pisses it down and leaves you obstinately refusing to accept your mother might have been right yet again when she suggested you wear a coat.

But when it shines it is worth basking in that glow for as long as possible. Back-to-back wins might not ordinarily be cause for celebration at Arsenal yet after the tsunami of seven in a row without victory, Mikel Arteta will appreciate the fresh air.

It was not always on the cards at Brighton, perhaps the single greatest team in Premier League history when the defensive and attacking thirds are completely disregarded. The hosts had their usual chances and wasted their usual chances. Eight shots in the first half forced only one save from Bernd Leno, with Alireza Jahanbakhsh’s effort requiring little more than a routine stop.

Arsenal’s sole attempt in the opening 45 minutes was an off-target Granit Xhaka free-kick. Even for them, the expiration of goodwill from the watershed moment at home to Chelsea seemed bizarrely and frustratingly swift.

The game turned on two numbers: 11 and 21. The first represents the number of second-half minutes Arsenal dominated for, momentum shifting suddenly from clinging onto one point to battling for three. Whatever the half-time message from Arteta, it worked. His players jolted into action, playing with a confident authority and linking without thinking.

Robert Sanchez produced the sort of brilliant but unwitting save that Jerzy Dudek would be proud of to keep Pierre-Emerick Aubameyang out. The forward had two more efforts in between attempts from Xhaka, Pablo Mari and Rob Holding. One move saw Emile Smith Rowe dance between defenders to feed Gabriel Martinelli, who curled just over.

It was a tantalising window into what this Arsenal could be.

But the key was that Arteta noticed the flow and moved with it. Martinelli was removed, Alexandre Lacazette replaced him and 21 seconds later, Arsenal had their breakthrough.

Such substitutions are always judged in hindsight, of course. Arteta would be hailed as a genius if he had kept things as they were and Arsenal still scored. That’s how this shit works. Yet he has spent enough days in the eye of the storm to earn this moment in the sun, however brief.

At the centre of it all was Bukayo Saka: architect of Lacazette’s winner, creator of Aubameyang’s gilt-edged chance and the very heart of almost every positive aspect of Arsenal’s season heading into the new year. Arteta may or may not still be in charge by the end of 2021 but his management of Saka will ensure his impact is still being felt in north London for years to come.

It is not at all normal for a teenager to be so integral to a traditional member of the elite. Most players emerging at his age and on such a platform are surrounded by excellence. Think Wayne Rooney at Manchester United, Michael Owen and Robbie Fowler to a lesser extent at Liverpool. For an Arsenal example, Cesc Fabregas. Saka has none of those role models because he already is the role model: a player performing admirably in a variety of different positions, always doing what is asked of him to the best of his immense ability, someone to turn to when in need of inspiration.

Arsenal could have fizzled out after their burst of energy but Saka single-handedly kept them going. His assist started when receiving a Holding pass with his back to goal in his own half. From there came an instant turn past Dan Burn, a thunderous run to the edge of the area and a perfect cutback for the lurking Lacazette.

That was not going to come from anyone else. Arsenal are learning to walk again before they can run and it is clear to see the lingering tentativeness with each pass and shot.

Not for Saka, who has been bright even in the darkest moments and might eventually be surrounded by teammates worthy of his skill and effort if Arteta can harness this sliver of form. He deserves nothing less and so much more than his quality being reduced to simply ‘playing the kids’. Saka is a senior player in all but age.