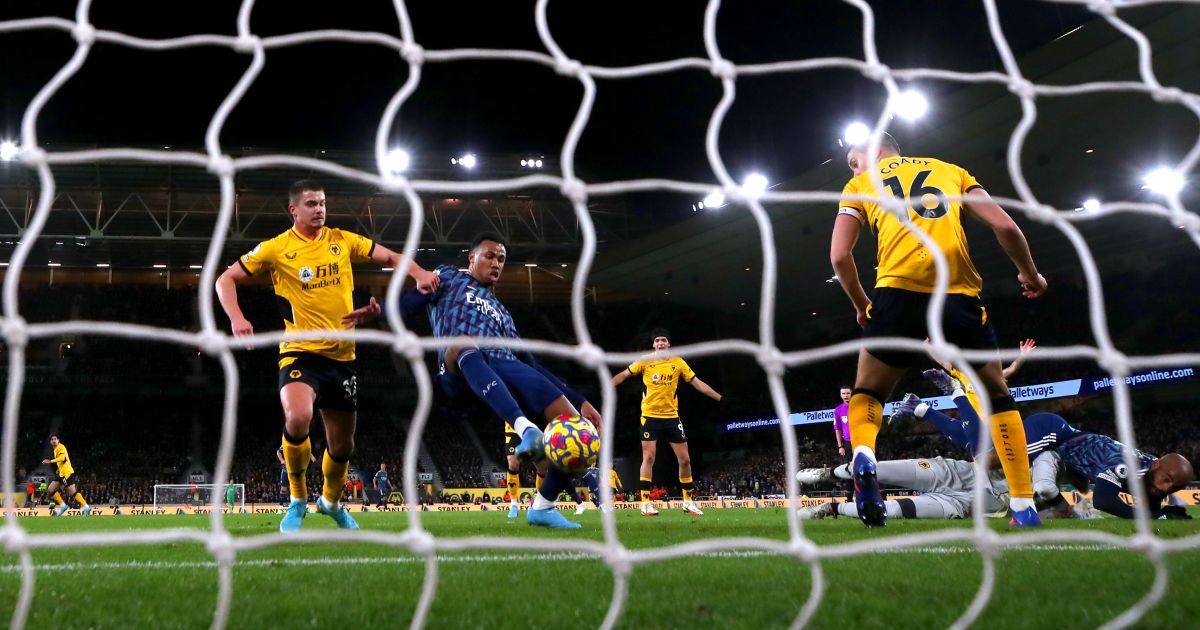 Arsenal were very good against Wolves and got a great three points despite still going a little bit Arsenal.

There isn’t really such a thing as an easy win against Wolves.

They’ve only lost by more than one goal twice all season, and both of those were 2-0. They’ve still conceded fewer goals in the Premier League this season than everyone bar Manchester City despite making an uncharacteristic mess of defending a corner to allow Gabriel to scramble home what would prove the only goal of this game to hand Arsenal a massive three points.

This is a massive win for Arsenal, even more so given that they had to spend the last 20 minutes defending with just 10 men after Gabriel Martinelli went full Arsenal and contrived to pick up two bookings in the space of quite literally five seconds. That both yellow cards came for heads-gone petty shoves on Wolves players only makes it better. For a team that specialises in red cards, this still represented a raising of an already considerable bar. Your move, Granit.

Here’s the thing with Wolves, though. They are a difficult team to beat. They keep themselves in almost every game they play. But if you’re going to play 20 minutes with 10 men while defending a lead against anyone, you’d choose Wolves. Especially when you’re as accustomed to playing with 10 men as red-card specialists Arsenal are.

Playing with 10 can focus the mind and Arsenal set about the task with a resolve that hasn’t always been their calling card. Wolves, though, having played quite well against 11 and arguably a touch unfortunate to be behind, were crap against 10, throwing cross after cross after impotent cross into the penalty area where Mikel Arteta had shrewdly deployed three centre-backs to deal with this eminently predictable threat.

Arsenal had taken the lead in scrappy style in the first half, Gabriel providing the finishing touch after Alexandre Lacazette beat Jose Sa to Ben White’s header back across goal. It was a mess, and the sort of thing that you still half-expect to see disallowed for no reason just because it’s all a bit of a mess and the keeper’s involved.

Wolves spent the rest of the night huffing and puffing against first 11 and then 10 Arsenal players without ever really looking like they would add to a goal tally that is still yet to reach 20 in the Premier League this season for very good reasons. These are the fine margins under which Wolves operate, a whole – admittedly quite successful so far this season – strategy built on never ever making any mistakes in defence.

For Arsenal, though, a hugely productive midweek programme after what had been a deeply traumatic 2022 thus far. They hadn’t scored a goal this year before Gabriel’s effort, had failed to improve a shrinking squad in the January window and got knocked out of both cup competitions. This set of midweek fixtures was one that threatened to make things worse still for the Gunners. They had, on paper, by far the hardest assignment of the top-four contenders with both Spurs and West Ham at home to bottom-half sides and Manchester United taking on relegation-threatened Burnley. As it is, Arsenal have kept pace with West Ham and gained on both United and Spurs. It’s a right result for Arteta and co.

It would be wrong to call this a fully convincing performance, but there was enough brightness about the first-half performance and enough resilience about the second to provide genuine encouragement that Arsenal could well prevail in the tallest-dwarf competition that the stumble for fourth has become. Arsenal have no other distractions now, and the postponement of the weekend’s scheduled clash with Chelsea, who are at the Club World Cup, leaves Arsenal with an eye-catching run of games coming up.

Sure, they’ve got rearranged games against Spurs, Chelsea and Liverpool to sneak in somewhere, but they’ve also got Brentford, a return clash with Wolves, Watford and a calamitously out-of-form Leicester in their next four games. It’s a real chance to make a real statement in that fourth-place chase.

This is Arsenal, though. Even on this impressive and successful evening they managed to have arguably their best player on the night pick up two yellow cards in five seconds. They probably won’t win again until April or something. Silly Arsenal. Silly football.