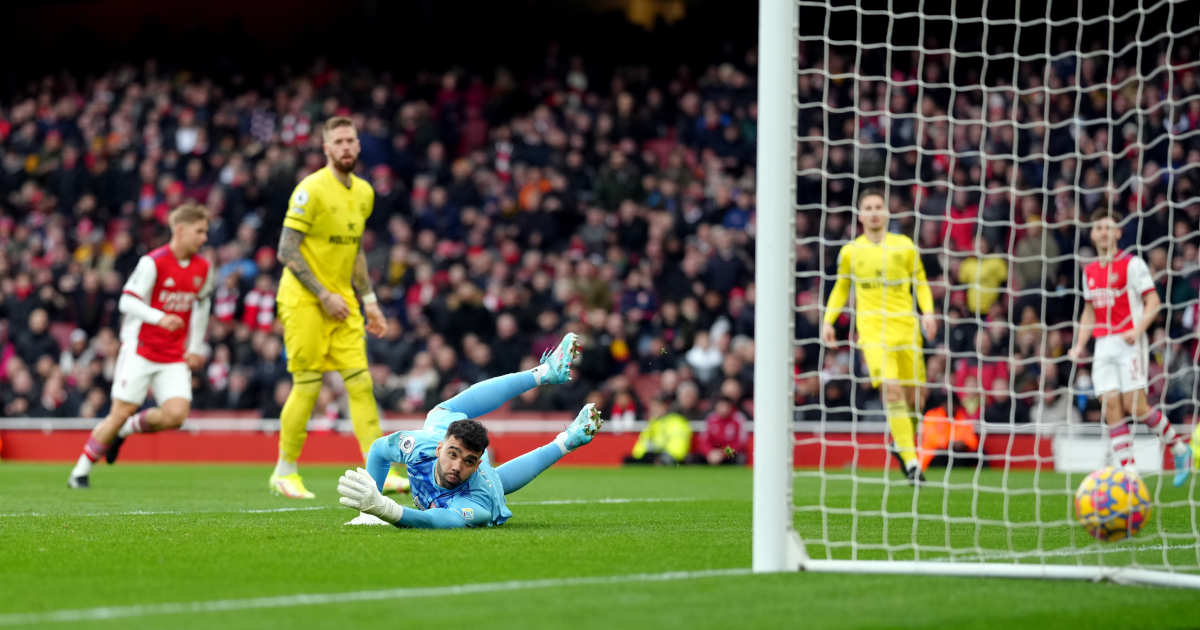 Arsenal are grinding out wins, and that might be enough to get them back into the Champions League when those around them are dropping points.

It doesn’t say much for the state of the chase for fourth place in the Premier League that the team who did the best out of last weekend’s fixtures was the club that didn’t play a match at all. Arsenal would have been playing Chelsea, but they were becoming the world champions in the Middle East while, one by one, the other clubs chasing that final Champions League place found ways to trip over their own bootlaces. Manchester United were held by Southampton. Spurs were beaten at home by Wolves. West Ham could only claim a point from their trip to Leicester. Arsenal’s position was strengthening with each passing result, and all without even having to kick a ball in anger.

There is, of course, a problem with this, which is that games in hand don’t count for a great deal when you’re playing the way that Arsenal have been since Christmas. Their only goal and only win came in their last outing at Wolves, but the performance wasn’t much to write home about and they still look toothless in attacking positions. The decision to cut their losses and offload Pierre-Emerick Aubameyang was completely understandable. There were plenty of signs that he was becoming a toxic presence around the club. But they didn’t replace him, and that lack of threat in front of goal has been a constant for Mikel Arteta, throughout the first weeks of the new year.

Brentford, meanwhile, seem to have settled on the perpetual crest of a total meltdown. The goalless draw claimed in their previous match against Crystal Palace ended a run of five straight defeats, and troublingly they conceded 14 goals in those five matches. Christian Eriksen has arrived at the club and is in training with them, but he hasn’t freatured yet and his name wasn’t on the teamsheet for their trip across London. Ivan Toney is the only player to have scored for them since the 11th January, and they’ve been conceding too many goals. With the other teams at the bottom of the table starting to pick up points, looks over the shoulder have become somewhat more feverish over the last couple of weeks; the effervescent team that took Arsenal to pieces on the opening weekend of the season already feels like a very distant memory.

Arsenal remain the favourites to take that fourth Champions League place because of their games in hand. After West Ham dropped another two points at home against Newcastle United in the lunchtime match, they kicked off with four games in hand on them, and just two points behind. They also have two games in hand on both Chelsea and Manchester United. Winning those would put them in fourth place, and only two points behind Chelsea. But again, there remained the absence of an attacking talisman against Brentford, a player around whom everything could pivot. The familiar shouts for penalty kicks were present and correct, but so was that feeling that Arsenal still need that incisive edge if they’re to improve substantially from where they are now.

None of this is to say that Arsenal didn’t create chances throughout this opening period, the best of which resulted in the ball ending up in the net from Alexandre Lacazette, only for the video assistant to call play back for a marginal offside. Otherwise, there were the now traditional Emirates Stadium penalty appeals, two of them in the first half, one for a foul which would have been harsh and one for a handball which was, if anything, a more surprising decision. Youane Wissa’s arm didn’t seem to be in a particularly ‘natural’ position. Presumably the fact that he was skidding on his side at the time that the ball hit him counted in his favour as the VAR officials waved the complaints away.

Two minutes into the second half, they broke the deadlock. It was a move that was all about the creation of space, with Kieran Tierney providing the decoy run to allow Emile Smith-Rowe the space to surge to the left-hand edge of the Brentford penalty area before curling the ball around David Raya and in to give Arsenal the lead. Smith-Rowe remains their top goalscorer, despite being a midfield player, which says something, both for how accomplished he’s been this season and how far short Arsenal have been in other attacking positions for much of it.

With Ivan Toney absent, Brentford had little to offer by way of mitigation, and the remainder of the second half matched the pattern of the first, solid Arsenal possession with little end product and the occasional feverish rise in the noise of the crowd when they did push into the visitors’ penalty area. But there was still time for one example of why Arsenal have the quality to finish in the top four this season, and one example of why they might be.

The former was straightforward enough, a break which started with the immaculate distribution of Aaron Ramsdale and which ended with Bukayo Saka rolling the ball into an empty goal to make the points safe with eleven minutes to play. The latter was evident a couple of minutes later when Lacazette was withdrawn and gave the captain’s armband to Granit Xhaka, who promptly rejected it. A very late Brentford consolation goal from Christian Norgaard was neither here nor there, other than giving the final score a feeling of jeopardy for the home side that the match never really had.

This is better, from Arsenal, and arguably more importantly, at the moment, it’s enough. Getting three points against a Brentford team that seems to be sliding inexorably towards a relegation fight isn’t going to win any awards, nor is it a result that will set passions aflame, but it is the sort of result they need, and it’s also the sort of result that they’ve failed to pick up too many times in recent years. It is a curiosity of this season that none of the teams chasing that last Champions League place seem to want it that much. At the moment, Arsenal don’t want it that little bit less than the rest, and it’s starting to look as though that might be all that’s required to secure it.