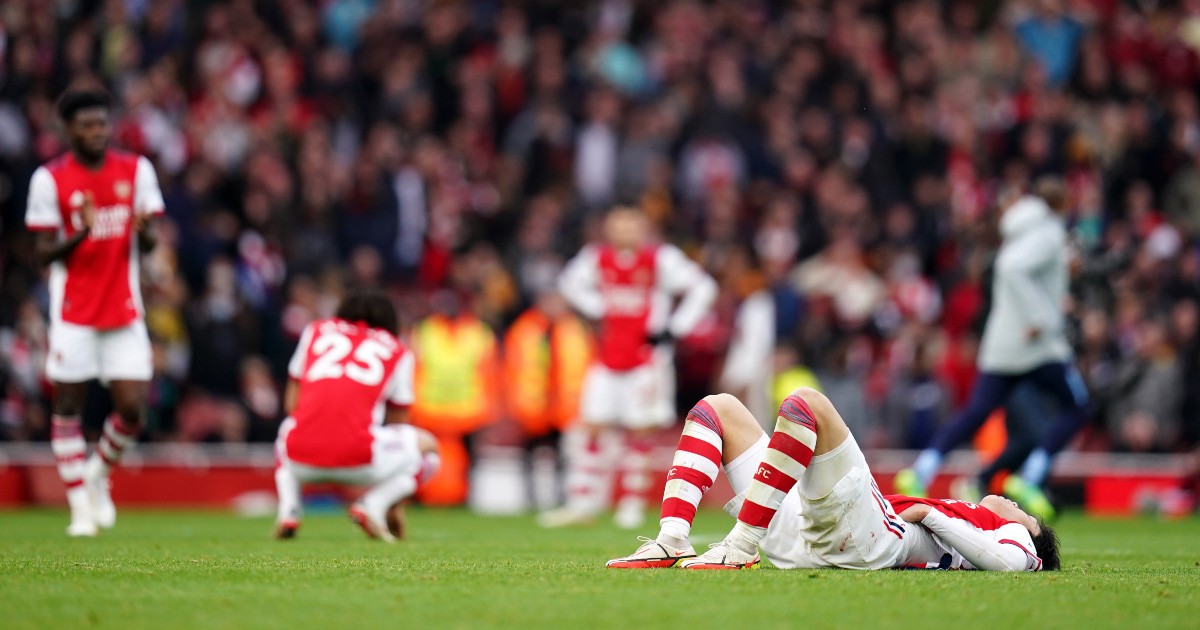 A brilliant game between Arsenal and Man City was reduced to the same boring VAR talk as BT Sport seemed to think there was no other choice.

There is a popular meme based on a 2013 skit from The Eric Andre Show. Whether consciously or otherwise, we have all seen a version of it in some way or another. In its original guise, Andre shoots comedian Hannibal Buress before turning to the camera and solemnly pondering: ‘Who killed Hannibal?’. But the internet adopted the scene as a sort of byword for a self-destructive lack of awareness. The format features two pictures, the first of which depicts the titular character having fired a gun at someone behind him numerous times, while the second shows the holder of said gun asking a question which seems to blame either the victim or anyone else but themselves.

This is all an around about way of saying that BT Sport donned a Stuart Attwell mask and opened fire at the joyous, gripping spectacle that was Arsenal 1 Manchester City 2 on Saturday; they did not even wait until the result was decided before openly condemning VAR and censuring the officials for ruining the spectacle.

Rodri had not even struck his stoppage-time winner for the visitors at the Emirates Stadium by the point the commentary team was lamenting how the reaction to the game would be dominated by VAR discourse, having dedicated most of the previous half an hour to their own quarter-baked theories about how the technology should be implemented.

BT commentators say it's a shame the reaction to this game will be all about VAR while continuing to unnecessarily bang on about VAR.

Soon after, they regretted that their punditry team would have to engage in a similarly laborious conversation, as if broadcasters have no choice but to stoke the impotent fires of supporter fury and referee villainy.

The possible topics were endless and infinitely more engaging: the development Arsenal had undergone 126 days since being thrashed 5-0 by the same opponent; the displays of Gabriel Martinelli, Kieran Tierney and the phenomenal Thomas Partey; how Manchester City looked eminently beatable in the first half, not a great deal more than ordinary in the second and yet still won at an incredibly difficult away stadium; the way Pep Guardiola’s substitution helped break down an obdurate defence. Break down that wonderful move for Arsenal’s goal, or Aaron Ramsdale’s sublime pass to Martinelli to launch an attack in the tenth minute. Analyse how Manchester City were targeted by the opposition press, the pulsating midfield battle, Nathan Ake’s crucial goalline clearance in an otherwise difficult performance. Don’t drag subscription TV down into low-tier pub chat that is desperate to incite instead of insight.

Having hovered over mute for much of the second half, it took a couple of minutes of studio chat for the ‘off’ button to be deemed a better solution. The discussion over the minutiae of decisions, of painstaking slow-motion replays, ignored explanations and a brilliant match reduced to rabble and rubble, lasted what felt like an hour, considering it started during the game and lasted long after. And by the end of it nothing was any clearer, no-one any more content. Opinions on these matters don’t tend to change just because Steve McManaman or Rio Ferdinand expose their lack of expertise in the field.

The year is 2022 and there are no fresh angles, nothing revelatory or new or perceptive or interesting to say about refereeing decisions or VAR or any of this bollocks. It’s incredibly boring to have this dedicated section after every game, to wheel Peter Walton out to tie himself in knots while screaming into the abyss or have Dermot Gallagher run his rule over the calls days after they have been made.

It is an endless cycle of infernal noise, a distracting pit of misery that people choose to jump into. Refereeing decisions cannot simply be ignored because of the impact they can have on a game, but they have now become the game itself. The shark has been jumped and it all becomes meaningless. The football is a sideshow to the pantomime of abuse.

When the host is describing the implementation of VAR as “depressing” yet simultaneously mourning and subsequently leading the apparent need to talk about only that after such a brilliant match, it begs the question as to what all of this is for. It benefits no-one but said broadcasters, who can keep a certain viewership engaged by talking loudly about something few understand, then cutting neat clips up for social media engagement.

There are legitimate debates to be had over VAR and the standard of refereeing, but not at the expense of a game as compelling and layered as this, and absolutely never to such a ludicrously all-encompassing extent. It is possible to disagree with the decisions while acknowledging that none were objectively wrong, at which point forensically studying each call becomes ultimately pointless. They could have gone either way and the same arguments would be had, just on different sides.

So let the focus be on the teams, the players, the managers, the tactics. Allow the cliches of Manchester City winning like champions and Arsenal imploding flow, for they are still far more interesting than anything related to VAR, on which stances were taken years ago and will not be changed. The visitors were fortunate. The hosts were excellent but Granit Xhaka and Gabriel gave the referee calls to make; this was a self-inflicted gunshot wound as much as anything else – although that is better than the broadcaster obliviously taking a bazooka to a brilliant game and wondering why the wreckage has left everyone so miserable.