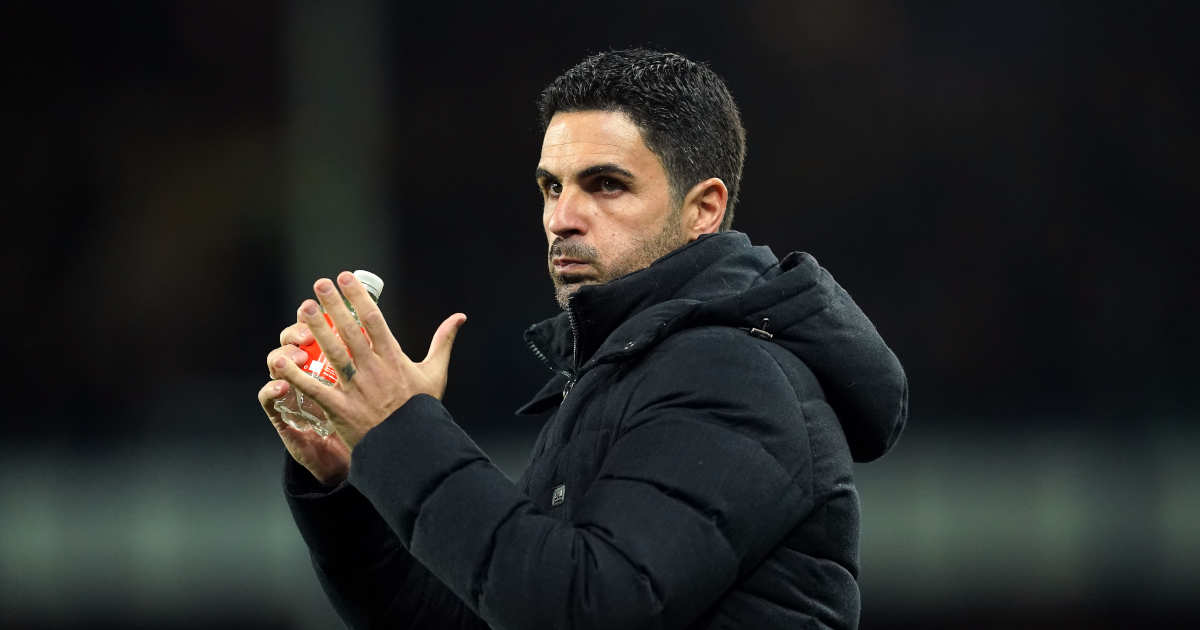 Arsenal manager Mikel Arteta is back under pressure after his team lost to Everton, but was their autumn renaissance an optical illusion?

Knives are starting to draw for Mikel Arteta again. For a fleeting moment, it started to look as though The Process was starting to bear fruit. After a calamitous start to the season which saw them propping up the rest of the division after three matches, Arsenal went on an eight-match unbeaten run which put them in contention for a Champions League place, but over the last couple of weeks clouds have formed over The Emirates Stadium once more, and the rumour mill has started to turn again.

At Goodison Park against Everton, Arsenal experienced a mixture of the good, the bad and the ugly. The good came in the form of Martin Odegaard’s opening goal, a nicely-taken volley in first-half stoppage-time, and in the two narrow offside calls against Richarlison which preserved parity in the first half and their narrow lead in the second. The ugly came in the form of a challenge by Ben Godfrey on Takehiro Tomiyasu which left the Arsenal defender with a cut on his face but ended with Godfrey still on the pitch after it was decided that the tackle had been ‘accidental’. The bad was just about everything else.

This was Arsenal’s third defeat in their last four matches, but while two of those defeats could probably be excused to some extent – Liverpool are superb this season while Manchester United are close competitors of Arsenal’s who won the game narrowly – the Everton result couldn’t. Everton went into this match as a club on the precipice of a full-blown crisis of their own, eight games without a win, plummeting towards a relegation battle they seemed in no way suited to, having lost their Director of Football earlier that day, and with supporters planning a walkout protest in the 27th minute of the match.

The protest happened, but only a tiny number of supporters seemed to leave Goodison Park. Why would they, when Arsenal were already offering a glimpse of a potential first three points since the end of September?

Furthermore, the nature of their three recent defeats has hinted at a soft centre still being present at the heart of this team. Losing 4-0 to Liverpool was a harsh reminder of the gap that has grown between the three clubs at the top of the table and the rest, while they led against both Manchester United and Everton before losing. Against Manchester United they were superb for ten minutes or so from the start but seemed to retreat back within themselves having taken the lead in somewhat fortuitous circumstances.

Arsenal seem to have a lack of confidence in their own attacking options at the moment. Pierre-Emerick Aubemeyang hasn’t been firing this season, but he is the club captain so the fact he was left on the bench for 85 minutes was perplexing. Especially considering that Gabriel Martinelli pulled up with an injury midway through the second half while playing on the left; it’s a role Aubemeyang has filled for Arsenal before, but Arteta opted for Eddie Nketiah instead.

With six minutes to play Nketiah hit the post from four yards out, when it seemed easier to score. When Aubemeyang finally did come on, it was to replace Alexandre Lacazette, who hadn’t managed a shot on target all evening.

Similarly, the decision to keep Granit Xhaka on the pitch for the entire game on his return from a knee ligament injury which had kept him out of the team since the end of September was perplexing. Xhaka had been expected to be out until January but has returned a month early, but none of this meant that he would necessarily be able to play a full game immediately upon his return. The upshot of this is that the good work carried out by their unbeaten run has been partially undone. Arsenal are back in seventh place in the table, four points from a Champions League place, but also four points from the bottom half of the table, and having scored just 18 goals in their 15 matches so far.

Arteta is coming up to his second anniversary as the manager of Arsenal. He won the FA Cup at the end of his first season, but hasn’t managed to return the club to the Champions League, and doesn’t look like doing so this season. Brendan Rodgers, Erik Ten Hag and Luis Enrique are the names that would likely be thrown into the ring should the owners of the club decide to pull the trigger, but Arsenal for now remain invested in Arteta’s ‘process’, even though many other Premier League club have already decided to make their changes.

There remains the hint of an excellent team, here. Aaron Ramsdale has proved to an outstanding addition in goal, while Bukayo Saka and Emile Smith Rowe are exactly the sort of exciting young players who should be able to create them plenty of opportunities in front of goal. But with that two-year anniversary coming up and the busiest time of the season looming on the horizon, Arsenal need to be quick and decisive if they are to make that change. In the blink of an eye we’ll be into the middle of January, and the chances of rescuing anything from this season will be diminishing rapidly.

As ever, the big question hanging over the Emirates Stadium after another chastening defeat is this: how long are both the club and its supporters supposed to wait for The Process to start bearing significant fruit?