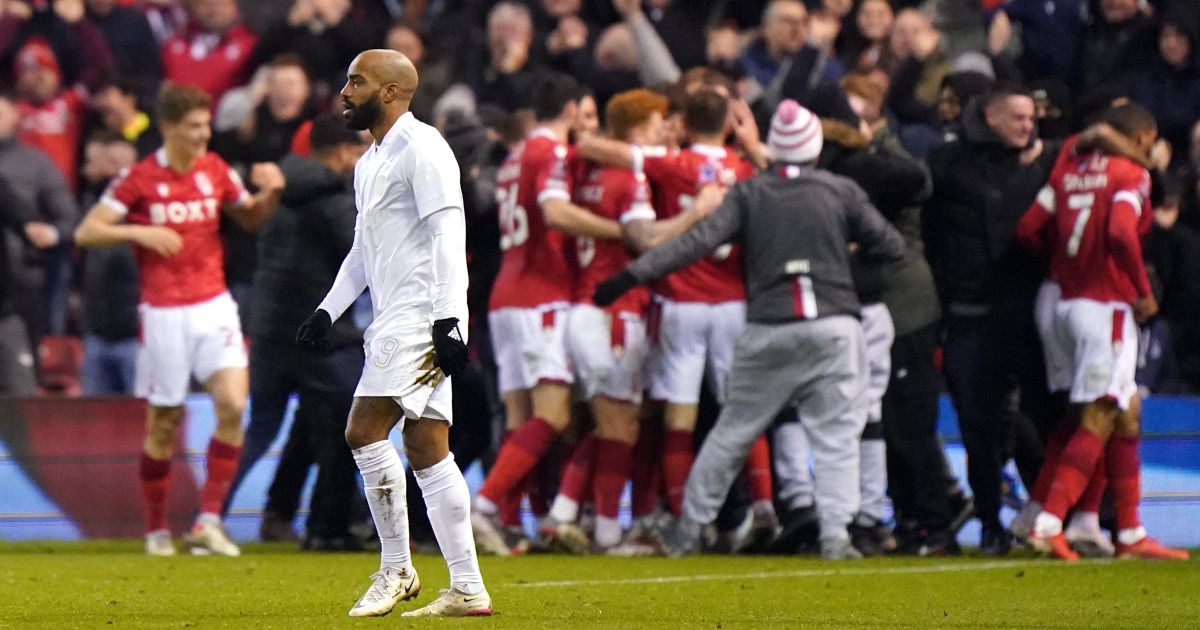 No shots on target in an FA Cup defeat at Championship opposition. Arsenal were absolutely rotten at Forest.

Arsenal don’t generally lose in the FA Cup third round, but when they do it’s at Nottingham Forest.

This was only the second time in 25 years that Arsenal have gone out at the first hurdle – a spell in which they have lifted the Cup eight times – and both have come within the last five seasons at the City Ground.

They are clubs with some similarities in those five years. Both trying to get back to where they think they ought to be – Forest to the Premier League, Arsenal to the Champions League – yet both seemingly doomed to follow any tentative step forward with two giant steps back.

Arsenal are currently in the midst of making an excellent fist of returning to the Champions League, appearing well placed to be the ones to take advantage of Manchester United’s self-destructive streak and have already won silverware this season having bagged the Taking A 1-0 Lead Against Manchester City Trophy last week.

Although they eventually and unimportantly lost that game, they had won the previous four by a combined scoreline of 14-1. Arsenal were on one of their regular upturns ahead of this trip, and also nicely rested after the postponement of the Carabao Cup semi-final first leg against Liverpool in the week.

Forest for their part had turned a disastrous start to the Championship season around. Having taken a solitary point from their first seven games, Forest lost just one of the next 16 to roar back into promotion contention.

They had then lost their last two games of 2021 against Middlesbrough and Huddersfield.

So Arsenal on an upturn and Forest apparently just beginning one of their trademark downturns.

Inevitably, then, it was Forest who prevailed. It is what these teams do.

And the Championship side were absolutely great value for it as well. After a first half in which neither side appeared particularly fussed, it was Forest who picked things up after the break with on-loan right-back Djed Spence magnificent throughout and the hosts increasingly confident of repeating history.

When substitute Lewis Grabban got on the end of a beautifully whipped cross from the right to stab home what proved to be the winner, the only surprise was the identity of the crosser as Ryan Yates found himself outside his usual midfield stamping ground to eyebrow-raisingly devastating effect.

The goal had been coming, Bernd Leno forced into a couple of smart saves before Grabban beat him.

Yet even after the goal there was no response from a bizarrely soporific Arsenal side who ended the game without a single shot on target.

It was hard to escape the notion they were not much fussed by this competition, but that’s a conclusion that’s hard to square with their own recent stellar record, the strength of the team Mikel Arteta put out (albeit one almost forced upon him by the limitations of those available to him thanks to those absent to Covid, injuries and AFCON) and the fact the manager was so incensed by Arsenal’s first-half lethargy that he made a tactical substitution just 35 minutes in as Nuno Tavares was replaced by Kieran Tierney.

Alexandre Lacazette was introduced with 20 minutes to go, and Sead Kolasinac replacing Cedric Soares, who had somehow lasted 89 minutes, in a discombobulating “They’re both still at Arsenal?!” of a switch.

None of these things did any good. Arsenal were just rotten. Toothless and uninterested and now once again finding their confidence dented ahead of a monumental week in which the Carabao games against Liverpool sandwich a Premier League NLD against Tottenham that carries huge top-four significance.

Arsenal being what they are, they might well win all three of those games and all will once again be right with the world. This is a club that doesn’t really do half measures any more. Half-decent would have been enough today.