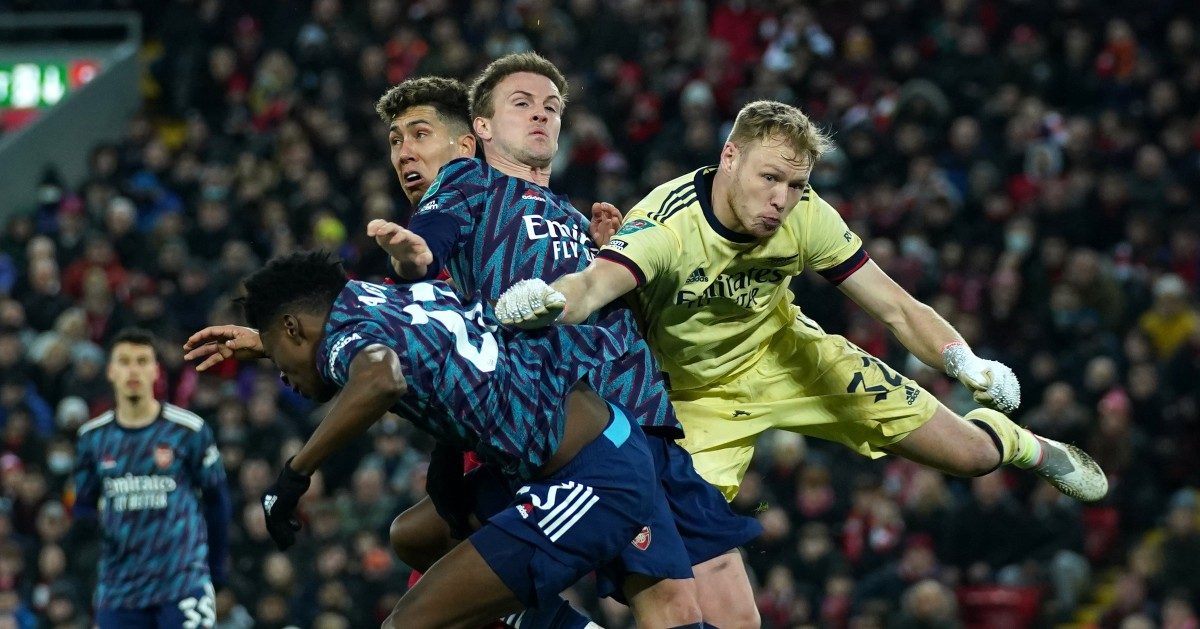 While the usual critics still see “a softness” about Arsenal, they proved their edge in the Carabao Cup semi-final first leg at Liverpool.

“There is a softness,” said Roy Keane, scoffing at the mere suggestion that Arsenal might actually be quite good. An improved performance against Manchester City did nothing to weaken his contrarian stance. Close your eyes and it is easy to imagine the scrunched-up expression and withering tone with which he delivered a simple yet effective: “But they lost the game”

It was at The City Ground that the Irishman offered his damning verdict, in all fairness. “They didn’t show any sort of presence about them,” Keane said. And he was absolutely right. They were atrocious against Nottingham Forest. Perhaps they saved it all for their trip to Anfield.

Arsenal, fuelled by a vague sense of pre-match injustice that was reinforced by a red card so customary and predictable that Mikel Arteta presumably prepares and coaches for no other eventuality between games by this point, were excellent.

Arsenal are the first visiting side to keep a clean sheet at Anfield when there was a crowd since Bayern Munich in February 2019.

There will be some, as with the Manchester City defeat, who undermine clear progress by pointing out that it is actually a sign of how far the Gunners have fallen; that this kind of result and performance being not only welcomed but praised is actually a damning indictment on Arsenal’s lowered standards. But the quiet whirring of a competent, resilient north London machine is drowning out the noise.

This idea of Arsenal being “soft” has been a tired trope for some time, like Turf Moor being a tough place to go or Manchester United needing one or two new signings to compete. It is a lazy cliché rolled out by the usual crowd but in this particular case, the boot really does not fit. The Gunners have had a notable edge about them this season. Their summer signings have helped instil a durability and toughness that might have been lacking half a decade ago, but certainly not now.

One truth will always be held self-evident: Arsenal relish in the thrill of shooting themselves in the foot. They love it. They live for it. It sustains them. It titillates them, gives them meaning. And there is no more comforting sight than Granit Xhaka with his finger on the trigger. Or his foot in Diogo Jota’s chest.

The moment could be traced back to Kieran Tierney and Gabriel pushing too high when trying to force a turnover in the Liverpool half, to the Reds playing out of that press with ease and shifting it to Andy Robertson, whose raking ball was guided perfectly into Jota’s rampaging path. But to try and justify or explain Xhaka is to try and catch water in a colander: it is incredibly frustrating, you will get nowhere and there will be an almighty mess to clean up at the end.

Arsenal failed to do that at home to the Premier League champions on New Year’s Day. With a weaker team away at a foreboding Liverpool side, having already lost their right-back to injury after 11 minutes, the Gunners dug their heels in to remain spotless in the first leg of the Carabao Cup semi-final.

Arteta deserves credit, immediately sacrificing the unfortunate Eddie Nketiah so he could reorganise his system with Rob Holding slotting into a central defensive three. He, Gabriel and Ben White made five tackles, seven interceptions and 14 clearances between them. In one move the manager solidified his back line, provided support for Albert Sambi Lokonga and retained a constant counter-attacking threat through Bukayo Saka, whose ability to carry the ball and relieve pressure with virtually no nearby assistance is ludicrous.

Alexandre Lacazette was an impeccable first line of defence, snapping at heels and biting into tackles before leading the charge, while Gabriel Martinelli is a pure distillation of hard-working but skilful South American forward who must be a sodding nightmare to play against.

And Liverpool had no answer. The closest they came in the opening hour was when Takumi Minamino mis-hit a cross that almost sailed over Aaron Ramsdale. The keeper saved well when the Reds forward had another delivery diverted by White, but the hosts created precious little and moved the ball far too slowly throughout. A midfield featuring Jordan Henderson and James Milner as starters might not be the way forward in 2022.

It was Minamino who missed the stoppage-time sitter that Liverpool would not have warranted – although the impenetrable White was waiting as the last form of resistance on the line, having already blocked three shots. Mo Salah might find that his contract negotiations are a little easier when he returns from Cameroon.

By full-time, the only platitude that truly applied to Arsenal was that Liverpool found it harder to play against ten men. It focused the visitors, imprinted a need for discipline, organisation and teamwork, and gave them an opportunity to prove just how “soft” they really are. Considering the build-up it must have been incredibly satisfying for Arteta and his players, for there was nothing false about this positive.