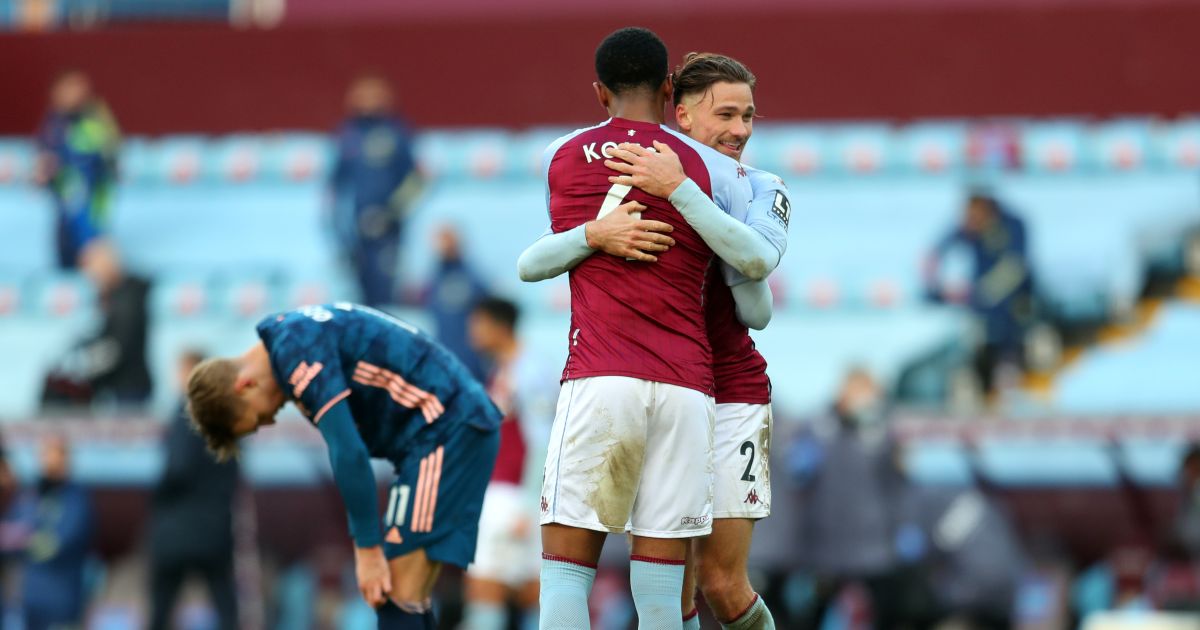 Aston Villa still have 17 Premier League matches to play this season and they have already equalled their points tally for the whole of last campaign. Dean Smith’s side had an early goal from Ollie Watkins to thank for a 1-0 victory over Arsenal on Saturday lunchtime. Having unofficially secured their Premier League survival for another season, Villa can now start looking at Europa League qualification and beyond.

Cedric Soares’ loose pass to no-one was pounced upon by Bertrand Traore on two minutes, who burst into the box and fed Watkins to score the only goal of the game. It was dreadful from Arsenal but set the tone as Villa showed incredible energy levels to keep pressing the Gunners for the majority of the match. There had been some suggestions in the build-up to the match that Smith could ring the changes due to the Villans looking fatigued in their 3-1 loss to West Ham in midweek. As it happened there were two changes with Traore and Marvelous Nakamba coming back into the side for Douglas Luiz and Anwar El Ghazi, with the alterations paying off. There was certainly no signs of tiredness here.

2 – The other three goalkeepers to concede within the opening two minutes of their full Premier League debut for a club:

Traore’s first-half performance was another hat tip to the fantastic recruitment work done by Villa in the summer, with all five senior summer signings starting the match against Arsenal. The former Chelsea striker has scored four goals and provided three assists in the Premier League this season, while Watkins, Matty Cash, Ross Barkley and Emiliano Martinez have played a huge part in Villa’s success this term. Cash and Watkins were particularly brilliant against Mikel Arteta’s men. Cash, who the Villans signed from Nottingham Forest in the summer, refused to give Bukayo Saka and Arsenal’s other attackers a minute’s peace, while making himself useful by bombing up and down the wing. Watkins scored his tenth goal of the Premier League season and demonstrated his work-rate and skill to run the Gunners backline ragged.

Arsenal’s recruitment, on the other hand, has left a lot to be desired over the past few seasons, especially in the case of Nicolas Pepe. The winger has struggled to make the grade at the Emirates Stadium since his £72m move from Lille in August 2019, with Gunners fans expecting huge things from the Ivory Coast international. Instead he has only managed nine goals and six Premier League assists in 18 months. Things have looked promising in recent weeks, though, with Pepe stepping up with three goals in his last four Premier League starts – before the match against Villa –  with captain Pierre-Emerick Aubameyang missing three games.

Speaking after Pepe’s fine strike in the 2-1 loss against Wolves on Tuesday, an impressed Arteta said: “If you ask me personally what I think of the performance that he put in overall, in all the phases of the game, I think it is the best he has played. And his contribution is the best that he has done and he needs to sustain that. When you have momentum in football, when you have to earn the right to play, then you cannot lose it. In order to do that you need to do the basics right and keep doing what you are doing. If not, you know that someone else will be knocking on your door.”

Pepe was again heavily involved for the Gunners as they struggled to break down Villa’s rearguard, who defended brilliantly. Probably the most frustrating part of Pepe’s display was the amount of promising positions he gets himself into, only to make a wrong decision or allow a poor touch to let him down. If the Gunners are to make that next step under Arteta, then the 25-year-old needs to maintain the consistency he has started to find in recent weeks. But it was not on show at Villa Park.

Arsenal hadn’t won any of their last 12 Premier League games when trailing at half time, while they had managed just two shots in total against Villa in their previous two meetings, failing to score. The stats were on Villa’s side on Saturday and they duly delivered another win to take their points tally for the season to 35 – the same as in the whole of 2019/20 – and lift them above Tottenham into eighth. The inconsistent results of Spurs and Arsenal, plus the form of Watkins, Cash and Grealish gives Aston Villa a chance of European qualification this season. Dean Smith’s men have 17 matches to make themselves heroes.