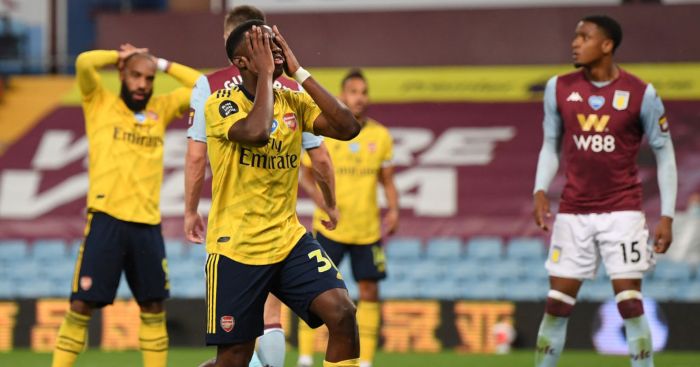 It’s always like this. When a new cycle begins, there’s always this betwixt and between period when a team teases its future. Arsenal are there at the moment. They’re in a something good, something bad world, with two fantastic performances against Liverpool and Manchester City to follow that bizarre loss to Tottenham, and now another ugly setback.

At Villa Park they reverted. The kind way to describe the Trezeguet goal which won the game would be to praise the strike. The fairer observation, however, would be to note how he was able to loiter alone at the back of the box. And then how easily the ball reached him. And then just how much time and space he had to volley his side into a lead that they would never really look like losing.

It was dispiriting in being such an obvious step back. Arsenal defended outstandingly well at Wembley. They had this defiant spirit to them in the FA Cup semi-final – a palpable determination not to allow their concentration to waiver.  On Tuesday night, that new resolve seemed like it had been illusory. The mistakes were back, so were the gaps and the chances given up.

But this is the way of things and it probably will be for a while. That isn’t to say that a brighter dawn is definitely on its way, but that those clubs that have been led into a new era have always suffered through this kind of scenario to get there. Pochettino’s Spurs, Guardiola’s City, Klopp’s Liverpool; read through the early chapters of those tales to find the same inconsistency and the same calls back to what made revolution necessary in the first place.

Generally speaking, that’s been because those coaches didn’t just inherit a muddle on the pitch, but imbalanced squads with critical shortages. On this evidence, Arteta is very much in the same position.

Stylistically, this was a different challenge to the previous two games. Being able to sit deep and snap onto the counter-attack is a virtue, but trying to break down a more cautious opponent is another matter entirely. As during that game at White Hart Lane, Arsenal played with plenty of the ball – 64% in the first half – but without really creating opportunities. Or even situations from which opportunities may develop.

It’s suggestive of where they are in their evolution. The improvements that Arteta has instituted are still dependent on certain conditions to be relevant, and that’s because he remains short of the players needed to cure that problem. Arsenal have pace up front and in wide positions, but they still lack credible balance in midfield and, as this evening showed, their defenders can only be relied upon when the mood takes them. They’re an attractive team round the edges, but brittle and limited where it counts.

That showed on Tuesday night in a few different ways. Firstly, in Villa looking more dangerous than they have for many, many weeks. Secondly, in Jack Grealish doing more or less as he wished with the ball at his feet and giving his best performance of 2020. And, finally, in Arteta being able to send out Pierre-Emerick Aubameyang, Alexandre Lacazette and later Nicolas Pepe against the Premier League’s second-worst defence statistically, but not getting a shot on target in return.

It’s instructive, because that tranche of issues shows where the problems lie. Most importantly, it demonstrates how little creativity there is in this side. For all their hold on possession, in the absence of Mesut Ozil there isn’t an Arsenal player capable of using it to find a clever angle or a dangerous pass.

That doesn’t seem like a coaching point, either. It’s not a problem which can be cured on the training ground or by convincing players to think or act in a different way. Instead, it requires a different set of attributes. Either Arsenal import someone capable of unlocking the heavy doors in a low block, or Arteta’s improvements are going to be limited in their effect. The passing will have a certain rhythm, but it won’t necessarily go anywhere.

The defence is the defence and the midfield is the midfield. Those are tired issues which have needed a solution for years. But the lack of a playmaker will be the real stumbling block here; if it continues to be so, it will also separate what Arsenal are from what Arteta is trying to turn them into. And what a waste that would be.

There are excuses, because Saturday’s game was probably a draining experience and Arsenal rotated in response to that. This was also an excellent, committed Villa performance which got what it deserved and was long overdue. Dean Smith got his approach right and – among others – Grealish, Tyrone Mings and Douglas Luiz were all excellent.

Still, in the subtext lies a pre-emptive message for those above and around Arteta: either he’s given what he needs to convert this early promise to something more permanent, or these types of evenings will become more common.