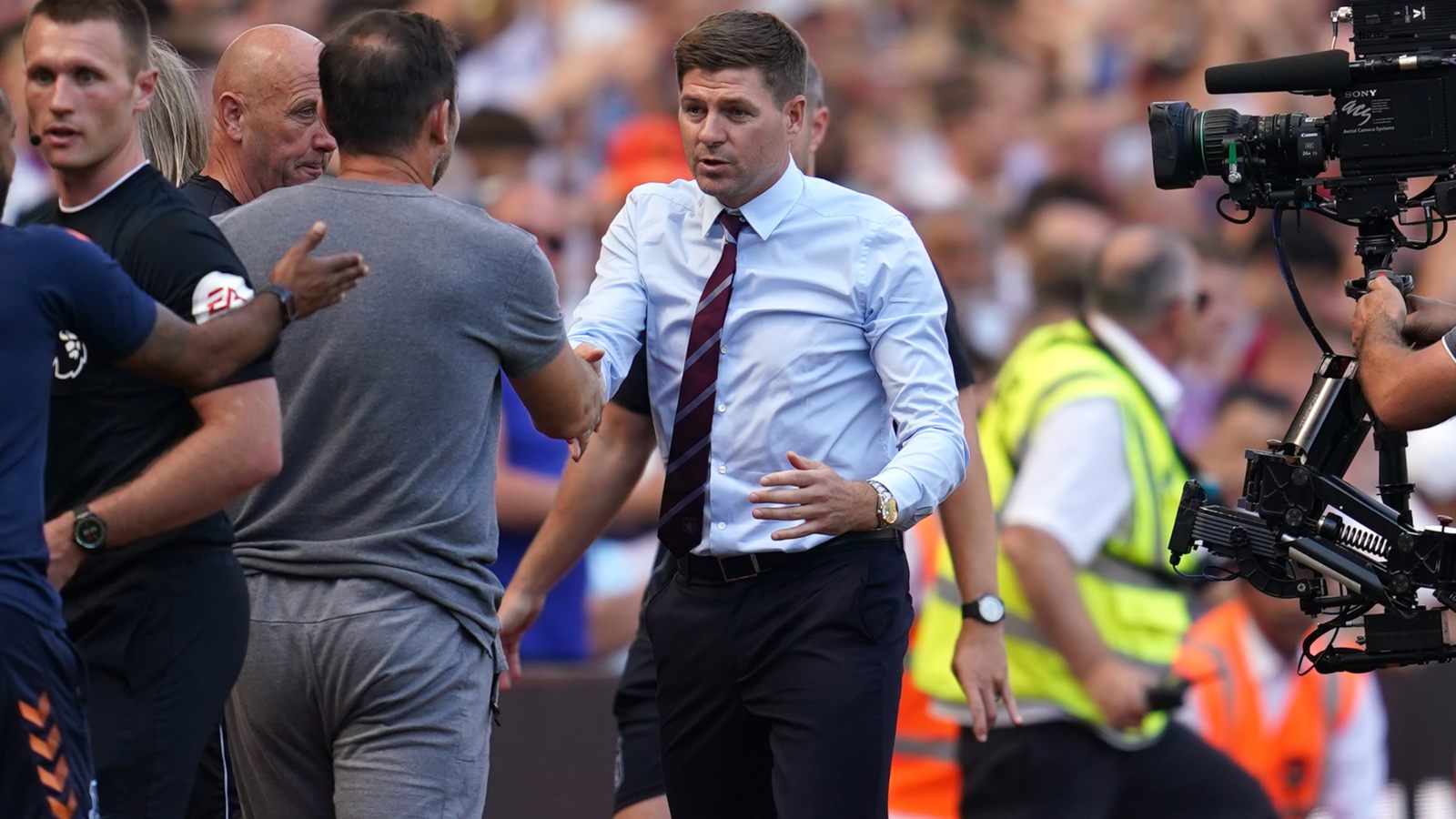 It was a hot, sweaty mess at times but Steven Gerrard will give precisely zero f***s about the manner of Aston Villa’s first win of the season.

As if the glare from the sun wasn’t scorching enough, Gerrard went into his first touchline meeting with Frank Lampard under the spotlight after a wretched opening-day defeat which followed a hugely disappointing end to last season.

The fresh state of his sky blue shirt is testament to whichever anti-perspirant the Villa boss uses because he must have been sweating even prior to a game which again highlighted some long-standing weaknesses of both sides.

From Gerrard’s perspective, the conclusion was a nerve-jangler too as Villa panicked their way to a victory that ought to have been considerably more comfortable after Emi Buendia put them 2-0 up with five minutes of normal time to go. But the Villans held out for a victory they just about deserved, one which went at least part way to answering some of the many questions prompted by their recent record.

Gerrard made a statement with his team-sheet by restoring Tyrone Mings to the heart of his defence while pairing Danny Ings with the returning Ollie Watkins.

The manager’s changes worked, with Mings a generally solid presence at the back – his customary cock-up, missing a first-half header which allowed Everton a great chance to level, wasn’t costly this week – while Watkins and Ings combined to occupy and irritate Everton’s back three all afternoon, at least until Ings was withdrawn late on.

Villa’s strikers combined for the first half’s most decisive moment just after the half hour and though Ings applied a ruthless finishing touch, Everton were architects of their their downfall, with Abdoulaye Doucoure most culpable.

It came from an Everton foray forward, another that was directed down a dead end where John McGinn robbed Dwight McNeill. At the point of the turnover, the Toffees were set, but Doucoure’s decision to leave his post and engage with Philippe Coutinho left his side two on two behind him, which McGinn quickly recognised.

One simple long ball into the channel was enough to stretch Everton to breaking point, but even when Watkins fed Ings, there was still time to recover after the striker’s loose control. But Conor Coady was too far away to effect Ings and Doucoure too slow on the turn.

Fine finish though it was, Everton gave Ings the alley.

James Tarkowski was part of a Burnley back four brilliantly drilled at denying shooting lines but the Everton defenders simply stood in a line anchored by Jordan Pickford. Ings could only find one spot but no Toffee recognised the danger.

It didn’t help Doucoure that he was clearly feeling a hamstring twang, which led to his substitution shortly after. But it also makes the decision to step out from a position of safety all the more frustrating from Lampard’s perspective.

Injuries are already a theme of Everton’s start to the season and no doubt Lampard will be very keen to tell everyone all about it. But it was an enforced Villa change that saw the hosts seize the second-half initiative.

Like any Villan, Coutinho could hardly have complained had he been dropped in the wake of the Bournemouth defeat but Gerrard stood by his man. Not only did he maintain his faith, Gerrard gave Coutinho a run in his favourite position, as a No.10 off the strikers.

Coutinho was tidy but, again, moments of inspiration were few and fair between. When Buendia took his place on the hour, Villa looked a greater threat, with the Argentina playmaker creating more chances in his cameo than anyone else.

Buendia’s goal, another from a sloppy Everton giveaway in midfield, was just reward for his impact. Villa fans have questioned whether he and Coutinho can play in the same side and the evidence suggests they probably can’t – at least not with both in their preferred position.

The shape they took today, with a playmaker off a front two ahead of a midfield trio, offered Villa a better balance and Gerrard enough encouragement to stick with it. Which leaves Coutinho perspiring over his place before Villa go to Palace next week.

The whole of the Holte End sweated while Villa shambled through the final stages after Lucas Digne’s messy own-goal prompted Everton to inject some belated urgency into their play as they sought a leveller you could argue they didn’t merit.

Pressure and a raft of changes combined to throw the hosts into chaos but last-ditch interventions from Mings and Calum Chambers preserved the points that Gerrard so badly needed.