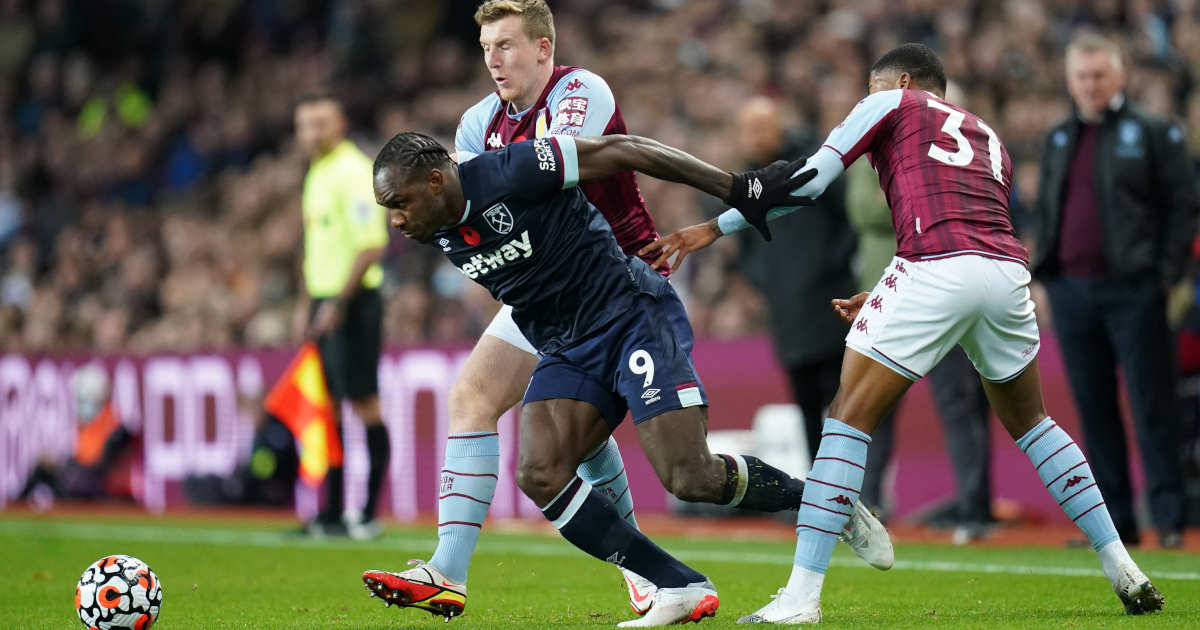 Aston Villa seem completely drained of confidence after four straight defeats, and against a West Ham team on top of its game they couldn’t catch a break.

Unhappiness is starting to rise at Aston Villa. The summer departure of Jack Grealish for Manchester City was always going to mean that this season would begin with something of a cloud hanging over Villa Park, but after an inconsistent start a win at Manchester United at the end of September lifted them to eighth place in the Premier League. It seemed as though a team that manager Dean Smith had reshaped to fill the hole left by Grealish’s departure to a point was starting to click.

But since then the wheels have fallen off their wagon. A supine loss at Arsenal was their third in a row, so Smith rang the changes for the visit of West Ham United. Out went Tyrone Mings, Axel Tuanzebe, Douglas Luiz and Danny Ings, replaced by Kortney Hause, Marvelous Nakamba, Jacob Ramsey and Leon Bailey. The decision to drop Mings looked particularly bold, considering he’s the captain and may be the most prominent player left at Villa Park following Grealish’s departure. Emi Martinez was fit to play, despite reports to the contrary a few days previously.

West Ham United, meanwhile, have that one ingredient that even money occasionally struggles to buy: confidence. David Moyes has done an exceptional job, lifting them to their highest league position since 1986 last season and bringing European football to the London Stadium once more.

Moyes’ managerial career has had two very distinct halves. Over 11 years with Everton, he was widely credited with breaking the cycle which had seen that club come close to dropping out of the top flight for the first time since the 1950s.

But after this, his reputation became tarnished. He was the wrong man in the wrong place at the wrong time at Manchester United, and subsequent events at Old Trafford have shown just how much of a poison chalice that job was then. His year in Spain with Real Sociedad was unexceptional – though he did at least beat Barcelona while he was there – and at Sunderland, the problems behind the scenes at the club likely made it unmanageable as they fell from the Premier League.

At West Ham, though, something seems to have clicked. His first spell with the club wasn’t spectacular by any stretch of the imagination, but he did keep the club in the Premier League, and Manuel Pellegrini didn’t do any better when Moyes’ short-term contract wasn’t extended at the end of the 2017/18 season. His return a year and a half later didn’t bring immediate improvements, but last season West Ham soared, and that run has continued through into this season as well.

This self-belief helps West Ham keep their shape during matches. It’s confidence that urged Ben Johnson to cut into the penalty area on the right and drive a low shot across Martinez to give them the lead after just seven minutes. It’s confidence that gave Declan Rice the nerve to roll a bobbling shot past Martinez just four minutes after Ollie Watkins had brought Villa level from 12 yards out after some neat interplay on the right from John McGinn and Emi Buendia.

Five minutes into the second half, Smith’s afternoon went from bad to worse when Ezri Konsa was sent off for a foul on Jarrod Bowen on the edge of the Villa penalty area after a lengthy consultation with the video assistant. Smith had to reshuffle, withdrawing Buendia and replacing him with Mings, whose spell on the bench turned out to be somewhat shorter than anticipated; a few minutes later McGinn pulled the ball back for Watkins to power a head at goal which was tipped onto the crossbar by Lukasz Fabianski.

And sometimes when things aren’t going your way, they’re really not going your way. With 12 minutes to play, Pablo Fornals and Nakamba went in for a challenge that left the latter on the ground. Everybody got involved and Bowen appeared to push McGinn to the ground, but all three players – Fornals, Bowen and McGinn – were all booked. Barely a couple of minutes later Bowen broke on the right, and his shot across goal could only be parried by Martinez, allowing Fornals to score a third for West Ham.

Four minutes after this, Manuel Lanzini played Bowen through to score a fourth goal.

This was a superb performance from West Ham United, all the more so because Michail Antonio, who had hitherto been their star player so far this season, had a relatively anonymous afternoon by his own standards. This was a completely cohesive display from a team playing completely on top of their game, and with talk now of Czech billionaire Daniel Kretinsky buying a 27% shareholding in the club, it seems as likely as not that they will continue to improve. Considering that they’re level on points with Manchester City and just two behind Liverpool, that’s quite something.

To a point, Aston Villa couldn’t catch a break. The sending off of Ezri Konsa looked clear upon considerable review, but it was only given after the referee changed his mind about a yellow card. The third West Ham goal was scored after a combination by two players who’d been involved in some pushing and shoving just moments earlier. But West Ham were superb and completely deserved both the points and their Champions League qualifying position. Make no mistake about it: they are where they are on merit.

With this fourth straight defeat, questions have to be asked about this Villa team. For all the changes made, they have been doughy in recent weeks, and while they were on the receiving end of a couple of decisions that might have gone another way, the brittleness of their confidence was on display throughout the whole afternoon. It’s impossible to pin a couple of 50/50 referee decisions on the last four matches. Unfortunately for Villa supporters, they are where they are on merit as well.