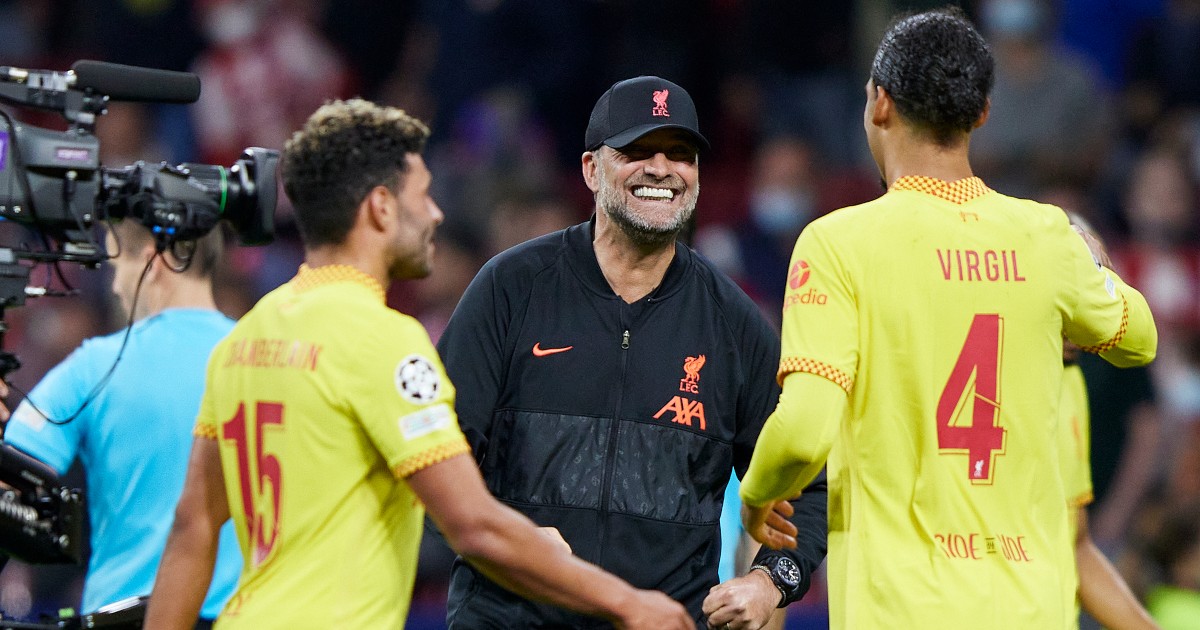 Atletico Madrid and Liverpool left little to the imagination in a scintillating Champions League game that ticked pretty much every box.

The idea that “you couldn’t write a script like this” has long been thoroughly debunked by the Gary Taylor-Fletcher last-minute equaliser at Stoke theorem. But commentary cliches must subsist and so even fairly ordinary matches have been awarded the “this game has had everything” treatment before. Rarely is the statement accurate; there is always at least one key ingredient missing. But Atletico Madrid and Liverpool ticked pretty much every box between them on Tuesday evening.

Five goals, including a wonder strike, a penalty and a contentious offside call. A healthy lead that morphed into a 2-2 stalemate by half-time. A red card. A spot kick given and then retracted, the player that won the first penalty having initially been adjudged to have committed the precise same offence at the other end mere minutes later. Peter Walton disagreeing with a referee’s decision. A quadruple substitution. A Luis Suarez yellow card for being Luis Suarez. And crucially, a winning team.

The game needed it. A definitive victor had to be declared after 90 bruising, scintillating minutes in the Spanish capital. It always takes something away from these fixtures when the shares are spoiled, when managers can confidently state post-match that they deserved to win but a draw was probably a fair result, when supporters on each side of the divide can convince themselves of a superiority never confirmed by the scoreline. When two teams start and finish such a breathless game at a deadlock, the sense of neither taking steps forward or back can dull the senses somewhat.

This heightened them so much that we had our crowning moment by full-time: one manager immediately jogging down the tunnel at the final whistle as the other quietly simmered at the sacred handshake being rejected. There is palpable tension between Diego Simeone and Jurgen Klopp, two phenomenal coaches with diametrically opposed philosophies on the game, and that only added to the spectacle.

It was pulsating, engaging. high drama from the early stages. After five minutes and as Liverpool’s remarkable Egyptian forward returned a Trent Alexander-Arnold pass instantly back to sender, Darren Fletcher authoritatively declared to Steve McManaman on commentary that: “One thing we won’t see tonight, Steve, is the kind of space that Mo Salah was afforded at Vicarage Road on Saturday. Carrasco’s on this side and he’s also going to get support from Hermoso.”

McManaman agreed: “Thomas Lemar will get back as well. They’re very organised.”

Moments later, Salah salved a deep cross close to the right byline, danced past Carrasco and Lemar, escaped the literal clutches of Koke and flashed a shot in off the falling Geoffrey Kondogbia. The deflection took something away from the strike but the run that preceded it was glorious. With that said, his third best goal of the month would be a season highlight for most players.

Naby Keita swung his foot through a poor Felipe clearance to double the lead soon after with a sublime volley and Liverpool had rocked Atletico. But as in their group opener against AC Milan, the Reds slipped when looking for the accelerator. Antoine Griezmann struck twice around the half-hour mark, Keita culpable for both efforts; he was substituted at half-time but Virgil van Dijk, amateurish for the second, was granted a reprieve.

The highlight of the first half was Henry Winter downing his pint of Gazprom and letting his keyboard know about it.

James Milner speaks to his children in Spanish. Milner and #lfc were giving a lesson to the Spanish champions but Atletico Madrid were always going to respond. Their coach is Simeone, a fighter. Good game. #ATMLIV

Liverpool suddenly looked vulnerable, shaken, a fish out of water in a stadium named Wanda. Their offside traps started to malfunction as the high defensive line caught them out instead of Atletico. The Spanish champions started to triple up on Alexander-Arnold like he was a Fantasy Football captain facing Norwich in the next game. Klopp was sufficiently panicked to send on Fabinho, who promptly did what none of his teammates could and cleanly dispossessed Joao Felix with his first touch.

The Liverpool manager presumably enjoyed the opening period, so expansive and uninhibited were both teams. The staunch defending that infuriated him so in March 2020 was painfully absent – as, indeed, was any form of defending. The Reds were indebted to Alisson, who saved wonderfully from Griezmann and Carrasco.

Griezmann’s red for a high boot on Roberto Firmino changed the complexion. Atletico retreated into their shell but maintained enough of a counter-attacking threat that Liverpool only tentatively approached their box, as if trying not to make too much noise and wake a new-born.

Their first seven shots all came from different players, while the dismissal of Griezmann removed Atletico’s main outlet. The Frenchman had more shots than any player despite being sent off in the 52nd minute and though Simeone will preach injustice, the call was fair and Liverpool, eventually, capitalised.

Simeone ought to direct any ire at Mario Hermoso for his mindless foul on Diogo Jota, who soon returned the favour in a bafflingly similar incident. Salah scored the penalty and Atletico had theirs revoked on second viewing by advice of the VAR.

That was how fine the margins were in Madrid: a narrow offside call here; a penalty there. These were two evenly-matched sides leaving little to the imagination and it produced a stellar game of a gripping Champions League group stage. It had everything, not unlike this unbeaten, unbroken and unbowed Liverpool side.