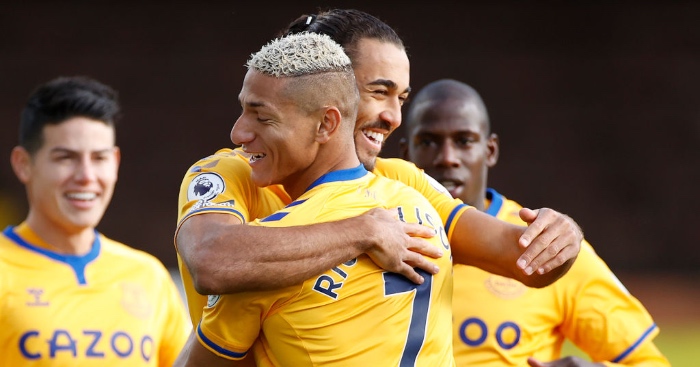 More a motivational technique than a genuine belief that Richarlison is a Ballon d’Or contender perhaps, but Carlo Ancelotti has managed enough of them to instil genuine belief in Everton’s most important player. It was a brilliant performance from the attacking players in general at Craven Cottage on Sunday, but the Brazilian again showed in the 3-2 win over Fulham why his absence has consistently been so costly.

He was by no means the stand-out player for Everton. Lucas Digne laid on two excellent assists, James Rodriguez’s stunning range and variety of passing was back, Alex Iwobi looks to have found a home as a right wing-back and the fact that Dominic Calvert-Lewin’s two tap-ins are now customary shows just how avidly he must be watching those videos of Filippo Inzaghi.

Fulham’s forwards too – Ademola Lookman, Ivan Cavaleiro and Ruben Loftus-Cheek when he was introduced – were dynamic and dangerous in a thoroughly entertaining game where defending was very much secondary.

But Richarlison – whose role in the victory will be a mere footnote in most reports – set the tone (very) early and dragged Everton quickly up to a level they’ve been nowhere near in his absence.

He drove past two Fulham defenders to set up Calvert-Lewin after 40 seconds but it was his defensive work from the front that made the real difference in those early moments: pressuring defenders into mistakes they duly made, making tackles; generally being a nuisance. When he’s not playing that forward-thinking defence starts and ends with Calvert-Lewin, particularly with James plodding about, waiting for the ball to be won back.

Richarlison does win the ball, dribbles round and through defenders and gets a shot away, as he did in one particularly impressive first-half play, all of his own doing. It was one example of the combination of desire, skill and directness that illustrates his status as a Premier League twist on sterotypical samba.

Having played the majority of both games for Brazil in the international break, he tired noticeably in the second half, which coincided with a Fulham resurgence just before and after he was replaced. To suggest he was the key factor in that change in ascendency would be disingenuous to Scott Parker and his side, who combined their typically pretty passing moves with a genuine threat.

Loftus-Cheek swept home Lookman’s cross, whose performance will have gone a long way to purging the penalty demons that will now – unfortunately – instead haunt Cavaleiro. After Loftus-Cheek was fouled by Ben Godfrey in the box moments before his goal, the Portuguese forward stepped up, slipped and fired the ball against himself and over the bar.

Fulham’s attack was worthy of a point: their defending was not. Doucoure’s free header six yards out will be a particular gripe for Parker, who gritted his teeth in unbridled anger in a 30-minute first-half spell which could have seen Everton out of sight. Parker has previously spoken of the need for total concentration and happy though he will be with the menace they showed at the end of the game, the drastic ebbs and flows will remain a real cause for concern.

Ancelotti too will be wary of his side’s inability to put a game to bed they could then easily have thrown away. But he’s got world-class footballers and a forward line that clicked once more, with their talisman in tow. Everton lost all three games Richarlison missed through his recent suspension and they haven’t won any of the eight he’s not played since his arrival in 2018. That’s far from coincidental.