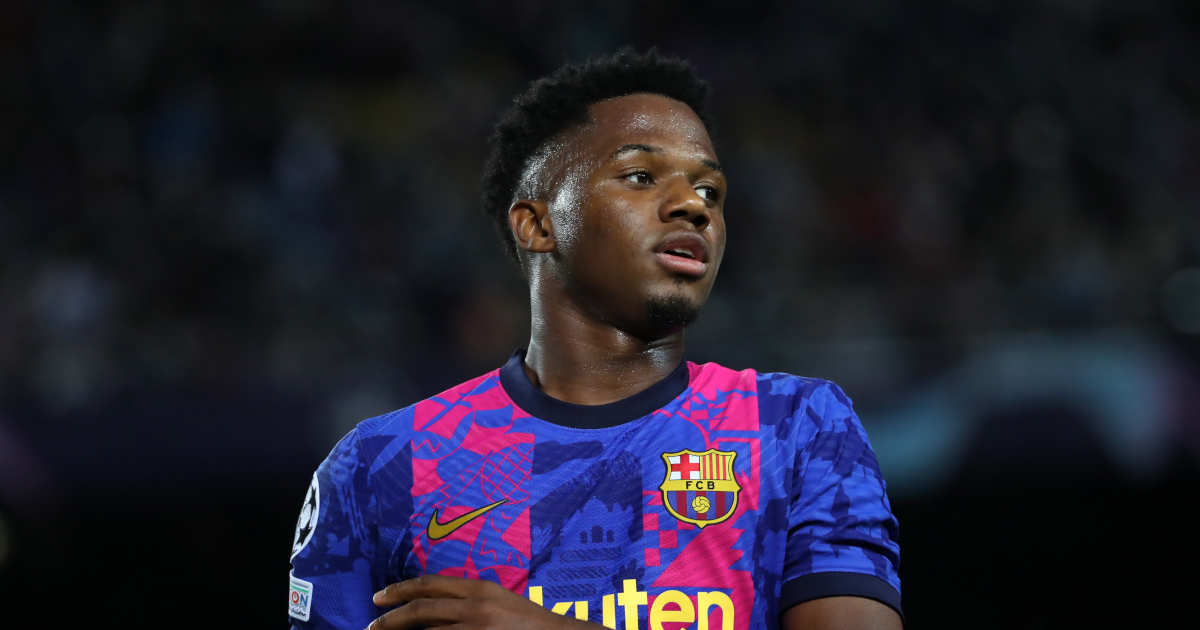 Barcelona have had a tough few months, but the move to tether Ansu Fati and Pedri to long-term contracts offer hope for the future.

Finally, Barcelona are up and running in the Champions League. A 1-0 win against Dinamo Kiev has kickstarted their campaign in that competition after two false starts and, while their chances of getting through to the knockout stages of the competition remain very much in the balance, a win in their return match in Kiev coupled with an (expected) Bayern Munich win against Benfica at the same time would put them into second place in their group with two matches left to play.

The same feeling, that their season could still swing either way, continues to hang over their start to the Spanish league season too. Draws against Athletic Bilbao, Granada and Cadiz had hardly set La Liga alight, but it still took seven games for them to be beaten and when they were, it was at the hands of Atletico Madrid, who are the second favourites behind Real Madrid to lift the title this season. They bounced back from this defeat – which came at the convenient time of just before an international break – with a win against Valencia, which lifted them to 7th place in the table, just two points off second place.

But if there has been increased cheer around Camp Nou over the last week or so, the source of that optimism has largely been focused on the future rather than the present. In the space of less than a week, Barcelona have secured the long-term futures of their next generation of teenage prodigies on contracts with release clauses that may be deemed ‘Newcastle-proof’. Ansu Fati and Pedri have both been secured on long-term contracts, and with release clauses at €1bn each. Barcelona, it would seem, are trying to insulate themselves against the possibility of losing a player in the way that they lost Lionel Messi (and others) this summer.

Fati is already being anointed into the role of The Next Lionel Messi. He was given the number 10 shirt during the summer, and his return from injury at the end of September followed a familiar script. Coming off the bench against Levante with ten minutes to play, he scored the final goal in Barcelona’s 3-0 win and followed that with the opener in their next league match against Valencia. The hero narrative is up and running. Pedri, meanwhile, is taking a slightly quieter road. Like Fati, he is 18 years old and is already being spoken of in the hushed tones usually reserved for the greats. And also like Fati, he has been secured on a long-term contract with a €1bn release clause.

Both of these players are exceptional talents, of that there is no question. But both also come with something of a warning, too. Fati was just 16 years old when he made his debut for Barcelona against  Real Betis; six days later he scored his first goal for the club against Osasuna. Both of these appearances came from the substitutes’ bench, and when he scored on his full debut against Valencia a couple of weeks after his first goal, he became the youngest player in the history of La Liga to register a goal and assist in the same match.

But it hasn’t been a straightforward path. Seven days after his 18th birthday, he tore the meniscus on his left knee, an injury which was expected to keep him out for four months that became ten months and which required several operations.

Pedri signed for an initial fee of €5m from Las Palmas in 2020 and made his debut from the bench a month into the season. His first goal for the club came on his Champions League debut, after he replaced Fati from the bench in a win against Ferencvaros. His first goal in La Liga came in the game against Real Betis during which Fati picked up his serious injury.

Pedri hasn’t had any injury setbacks, but there should be some concern about how much he is being used. He ended up playing 52 matches in all competitions for Barcelona last season, and was also selected in Spain’s squad for Euro 2020, where he became their only player to feature in UEFA’s team of the tournament, and then on to the Olympics, where he won a silver medal after Spain lost the final to Brazil. It was his 73rd match of the season.

The way that transfer fees have been headed amongst the super-clubs of late, Barcelona’s decision to secure the futures of these two players on long contracts with improbably hefty release clauses makes perfect sense, but there is a question hanging over even this: what might happen were Barcelona to receive an offer for either of these players that matches the release clause? A €1bn bid for Fati would be four and a half times the current record transfer fee paid, but when we consider the tug of war that took place between Real Madrid and PSG over the services of Kylian Mbappé for this season and this season alone, it starts to look plausible.

But even in the eventuality that someone (okay, Newcastle United or PSG) did decide to throw a vast amount of oil money at such a bid, it would still be down to the player to decide whether he wanted to make that switch. And one can only imagine what the wage demands of a billion Euro player might be. It would likely be a stress test for the idea that money is ‘no object’ for some clubs. In this, there’s a hint to the advantages that the big clubs hold, even when they’re financially stricken. When your club is the size of Barcelona, these ‘starlets’ become something approaching a right. There is a concern or two here; Fati’s lengthy injury and Pedri’s 73-game season should be viewed as amber warnings that Barcelona have to protect these players, but there is now ostensibly something to be hopeful about at Camp Nou. After the last few months, that should not be underestimated.