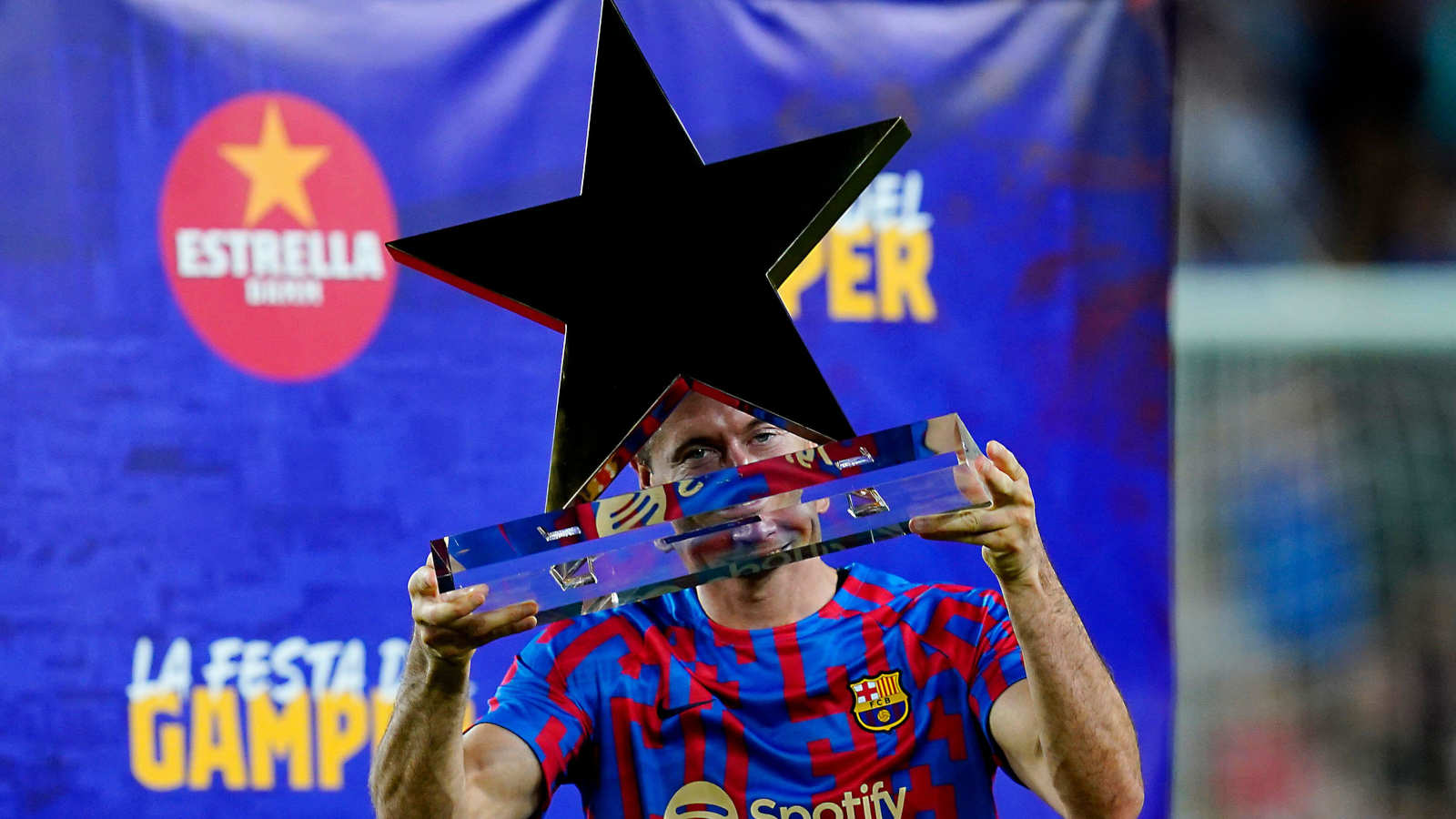 As the 2022/23 Spanish league season hones into view, it is becoming increasingly clear that there will be two Barcelonas on display. One of them has had an excellent summer, securing the services of Robert Lewandowski, Raphinha, Andreas Christensen, Jules Kounde and more. In pre-season they scored six in each of their last two games against the Mexican side Pumas and Inter Miami, and took a win and a draw from matches against Real Madrid and Juventus.

But then there’s the other Barcelona. The other Barcelona is still deeply, deeply in debt and its financial desperation appears to be causing  some sort of decision-making breakdown. It’s a club that has spent a ton of money that it frankly doesn’t have on players that it cannot afford and who may not even be able to start the season.

This version is doing about as good a job as could be of trashing the good name of the institution that bears its name.

It didn’t come as a huge surprise that Barcelona were prevented from registering a number of players for the start of the new season as per La Liga rules, although many had simply assumed that the club would have found an ever so smart way of circumventing them. But this doesn’t mean that the specifics of the reasoning weren’t surprising.

La Liga confirmed that the club had attempted to use its own money to inflate the value of the two asset sales – the ‘economic levers’ that Joan Laporta has repeatedly been referencing. The club had reported the value of these sales at €667m, but found that the amount Barcelona had received directly from investors Sixth Street for two TV rights packages of 10% and 15% respectively was only €517m, with the remaining €150m having been paid by the club itself.

Barcelona set up a venture called Locksley Investments, which purchased the club’s TV rights on a permanent deal, with Sixth Street buying the two packages over the next 25 years. Barcelona then spent €150m of their own money to purchase the rights from the 26th year. That enabled the overall accounting value of the deal to be larger now, announcing two deals, the first for 10% of the club’s La Liga TV rights over 25 years, the second for a further 15%.

This isn’t illegal and has been cleared by the club’s auditors Grant Thornton, but ‘legal’ and ‘within the rules’ don’t mean the same thing (for the record, ‘legal’ and ‘ethical’ don’t either); La Liga has confirmed that to get their players registered for the start of the new season they will now have to find a further €150m.

It is highly unlikely that these shiny new players will not be playing for them this season. There are still further levers to be pulled. This sounds less impressive when we recall that rather than being a literal lever than they can pull which dumps money into their club offices, these ‘economic levers’ amount to little more than borrowing even more money against their future revenue streams.

But the ultimate fact remains that the club has been splurging on players that they can’t really afford without having reduced their already engorged wage bill by anything like enough.

All of this comes alongside the club’s increasingly desperate-looking attempts to bully Frenkie de Jong out to get that wage bill down.

De Jong, as you may recall, was under serious pressure from Barcelona to leave the club but doesn’t wish to because a) he still wants to play for Barcelona, for some reason, and b) he’s still owed €17m in deferred wages after agreeing a restructuring of his wages in 2020.

Barcelona need him off their wage budget, but as per his contractual rights, it doesn’t seem as though he wishes to go anywhere.

The latest reaction of the club itself has been to suggest that De Jong’s contract had alleged irregularities. The club is reportedly also considering other contracts signed by Marc-Andre ter Stegen, Gerard Pique and Clement Lenglet, too.

Pique, astonishingly, is reported to be set to agree a second pay cut for the club already, despite the speculation about his first one.

But do Barcelona understand what they’re doing here? If – and it’s a huge ‘if’, obviously – De Jong’s contract is invalid, then he is automatically a free agent, and would likely have recourse to legal action. But Laporta being the club president rather than Josep Bartomeu doesn’t make Barcelona a different legal entity. If De Jong had recourse to legal action himself, that action would be against FC Barcelona, and the same would go for anybody else.

And if there’s something fishy about this contract, then how many others might that apply to and how might that expose the club to further risk? Consider, for example, the transfer of Neymar to PSG in 2018 for £198m.

The entire basis of that record-breaking transfer was to release the player from his contract with Barcelona. If his contract turned out to be ‘illegal’, it would mean that PSG had paid a world-record transfer fee to free a player from an invalid contract. Might they have cause to consider legal action against Barcelona themselves under such circumstances?

This is, obviously, getting into the realms of fantasy – quite aside from anything else, the only contracts identified by the club as potentially illegitimate, so far as we know, relate to wage deferrals.

But this should serve as a reminder that the law of unintended consequences has a tendency to work in mysterious and often ironic ways. And those pondering the likelihood that Barcelona may have found some 4d chess move which allows them, as ever, to do whatever they like should probably consider the way in which their attempt to game La Liga over this year’s wage bill has gone so far.

And even after all this, they’re still acting like they have some sort of divine right to hoover up the best players on the continent. There are rumours that they want to spend more money on Bernardo Silva and Marcos Alonso. At this stage in proceedings, Barcelona resemble nothing so much as a gambling addict in a casino at 3am, pulling out credit card after credit card to keep that roulette wheel spinning.

There remains a possibility that the Barcelona Laporta holds in his imagination will emerge for the new season, but that’s far from guaranteed.

As the start of the new campaign looms on the horizon they seem to be raising the stakes exponentially higher and higher with each new public pronouncement. But it remains unusual that the club should be calling attention to details of contracts signed in the recent past, because for all the changes of president they are the same club, and any ramifications from irregularities would land on their desk.

Perhaps it’s because they’ve had so few over the years that they are acting this way, but it feels as though Barcelona should be paying far closer attention to the law of unintended consequences.