Home Barcelona Barcelona remain focused on symptoms rather than causes 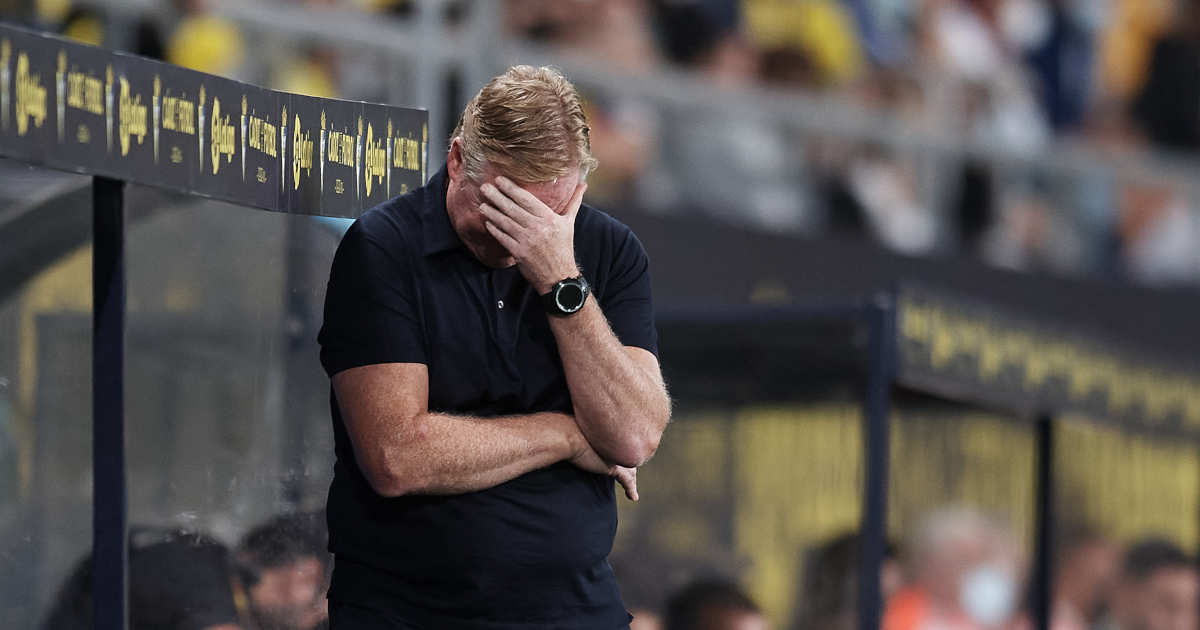 Barcelona are thinking of replacing Ronald Koeman, but yet again a football club may be treating a symptom rather than the cause of their problems.

It hasn’t been a very good start to the 2021/22 season for Barcelona. Their recent 2-0 defeat at Atletico Madrid may have been their first defeat of the league season, but previous results had not been exceptional, while their disastrous start in the Champions League leaves them bottom of their group and already facing an uphill battle to avoid elimination in the group stages for the first time in 21 years.

In La Liga, they kicked off as though nothing much had changed during the summer with a 4-2 win against Real Sociedad at Camp Nou. But since then, results have taken a noticeable turn for the worse. The only two other teams they’ve beaten in the league, Getafe and Levante, are in the relegation places and haven’t won a game yet this season and the Atleti defeat left Barcelona in ninth place in the table, a position that would deny them European football of any shade next season.

Meanwhile, their Champions League campaign looks nothing like the club’s previous endeavours in this particular tournament. They’ve already been beaten 3-0 twice, by Bayern Munich at home and Benfica away, and their upcoming double-header of matches against Dynamo Kyiv now both have a ‘must-win’ vibe that didn’t seem conceivable when the draw was first made. Finishing third in the group would at least throw them into the Europa League, but their performances against Bayern and Benfica were so abject that even this looks less certain than it has in decades.

Unsurprisingly, there are already calls to replace head coach Ronald Koeman. Koeman may well be a coach with over 20 years’ experience who has worked at the top level in four different countries, but football loves nothing more than addressing a symptom rather than the cause, so the runners and riders to replace him are already lining up.

Among them are Xavi, a Barcelona legend but also someone whose only managerial experience has been a couple of years in Qatar with Al Sadd SC, Marcelo Gallardo, who was named the best football coach in the Americas in 2019 by the Uruguayan newspaper El País but who’s never coached in Europe, Andrea Pirlo, whose sole season of coaching at Juventus last year was less than stellar, Robert Moreno, whose Granada team are currently fourth from bottom in La Liga, and Roberto Martinez, who hasn’t been involved in club football for five years. It’s even been suggested that they could be in the market for Brendan Rodgers.

But the arrival of a new head coach at Camp Nou wouldn’t actually change anything about the structural challenges that the club faces. Barcelona remain over €1.3bn in debt, and players of the calibre of Lionel Messi or Antoine Griezmann will not be returning to the club any time soon. It has been reported that there is a Qatari company that is prepared to give them a loan to cover their debt, but this could hardly be considered a write-off in any meaningful sense. And while it would give them a couple of years’ moratorium on the debts that they’ve already accrued, it wouldn’t make them disappear. Or it could all end with the club being owned by the company.

Whether it’s Koeman or somebody else, whoever sees out this season at Barcelona is in for a bumpy ride. The club has just announced record-breaking losses for the 2020/21 season of €481m, with their revenue having dropped by 26% to €224m, and expenses having increased by 19% to a record figure of €1.14bn. Against this sort of financial background, it’s difficult to imagine that Barcelona will be back to spending significant amounts of money in the transfer market in the immediate future.

The club’s new salary cap for this season has been announced as €97m, about €300m less than a year ago and one-seventh that of Real Madrid, due to losses incurred by the poor management of club president Joan Laporta’s predecessors, as well as the economic impact of the pandemic. It’s the seventh highest wage cap in La Liga; not an amount of money likely to lead to a triumphant end of season, and there isn’t going to be much money available for transfers, with CEO Ferran Reverter having also confirmed that the club is unlikely to have much more than €20m to spend on players once the transfer window reopens in January.

What Barcelona are discovering is that, yes, the transfer market can suck if you have to give consideration to how much any player you want to bring in actually costs. Among the players now being linked with them are Raheem Sterling, Dani Olmo and Divock Origi, but with their wage budget having been slashed by 80% and very little to spend on transfer fees, even these players start to look a little ambitious.

Barcelona are currently hit by a conflation of issues that changing one man is unlikely to solve. The club has a vast debt, and made record losses last year, it has been hit by a savage wage cap, the players that made the club special have had to be sold, and the ground is in urgent need of refurbishment. On the latter, there is some good news; the funding for the stadium redevelopment is ring-fenced. But getting back to financial liquidity is the most pressing of all their problems, because the truth of the matter is that they cannot afford the lifestyle they want to live.