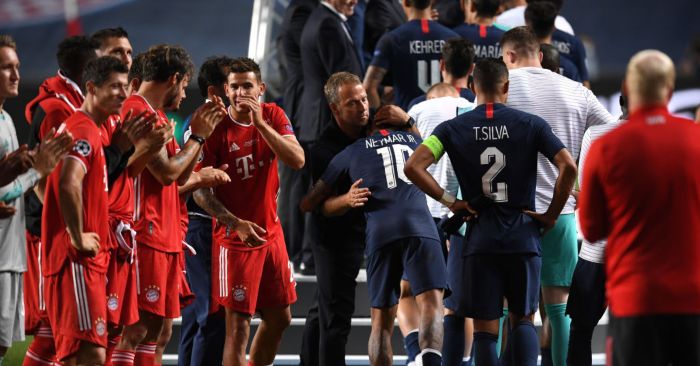 PSG were great. Bayern were better. Both teams had their moments. There was no Champions League final star. How refreshing.

It lacked a red card, a multi-man brawl, a sense of injustice and any semblance of genuine controversy. It was bereft of a starring individual performance on the grandest stage. It was settled by a single goal. Yet when Daniele Orsato brought the whistle to his lips for the final time, it was to conclude the 2020 Champions League final: the game that had everything.

Many will prefer the goal fests of 2005 and 1994, the shocks of 1996, 1997 and 1998, or the late drama of 1999 and 2012. But Bayern Munich and Paris Saint-Germain provided a fitting denouement to perhaps the most hyped tournament in history. A five-month hiatus almost guaranteed an anti-climax that never came.

In its place was an enthralling knockout stage and, for 45 minutes, a final as pulsating and captivating as anything before it. The two best teams in Europe took it in breathless turns to test the other’s limits and nerve. PSG blinked first as Bayern maintained their deathly cold stare to raise their sixth European Cup.

After all the many millions invested on both sides of this contrived divide, club football’s biggest game boiled down to that most basic of human incentives: the desire to prove a point.

“We’re facing Paris, his boyhood club,” explained the Bayern manager of his only change to the side that strolled past Lyon in the semi-final. “We hope he will be a bit more motivated. And he has the quality and speed to cut through the defence.”

It required little more than a Flick of the coaching wrist for Bayern’s new Kingsmaker to reign Europe supreme. Hansi and Coman most certainly earned their medals.

There’s something so ironic about Kingsley Coman, a PSG youth product who left for free in 2014, scoring the winner.

PSG sold 6 youth products last summer to stay within FFP boundaries and bring in veterans like Gueye & Sarabia, only for a youth product to end their CL dreams.

Yet it could have been so different. The narrative will be of PSG freezing when it mattered most, and how money cannot buy true happiness when there is meaningful raum for Thomas Muller to deuten with a sublime touch in the build-up to the only goal. The reality is that they contributed almost everything to this game aside from an opener of their own.

Neymar will inevitably bear the burden of failure but a brilliant run from inside his own half to within yards of the Bayern area was wasted by Angel Di Maria. Kylian Mbappe had two wonderful first-half opportunities courtesy of the quick-thinking Ander Herrera and a stupendous Leandro Paredes pass, yet both were wasted.

Presnel Kimpembe kept them in the game with a phenomenal clearing header from Coman’s cross as Lewandowski lurked.

For Bayern, Thiago Alcantara glided across the pitch like another being, Manuel Neuer was in inspired form and Lewandowski hit a post. Tony Pulis nodded sagely as Serge Gnabry toiled but even he played a part in the team move that Coman finished as PSG chased shadows.

It was a final of elite-level moments, summed up by that exquisite goal: Thiago’s pass; Kimmich’s control and release; Gnabry’s cut-back; Muller’s touch; Kimmich’s cross; Coman’s header. Every aspect required and received perfect execution. PSG’s only mistake was mortality.

Bayern were never likely to relinquish that stranglehold once they had it. The commentators prayed for the second half to “burst into life” with goals but the opener was always bound to starve the game of oxygen. Gary Lineker bemoaned “a tight and cagey affair” at half-time but that last half an hour was this rollercoaster’s nadir.

Anyone calling that first half "cagey" or anything of the sort hates foreplay and their partner quietly resents them for it.

Besides, those who equate goals to entertainment must surely recognise that 2019’s final contained twice as many goals but roughly a quarter of the fun.

This game perhaps benefited from the strikers failing to fulfil their primary duty. That allowed others to shine, even if only for a brief period. The goalkeepers were both excellent, the defending was largely great and both midfields enjoyed time in the ascendancy. Perhaps only Kehrer really performed below average, individual mistakes were infrequent and unpunished and the general standard was high. As frustrating as that must be for masochists who wish to see careers crash and burn on this stage, it was a rare case of both sides performing well but one simply carrying out their objective slightly more efficiently.

That does not fit particularly neatly into the wider desire to crown winners and deride losers. And PSG losing the biggest game of their genetically modified history is legitimately hilarious. But how refreshing to have a Champions League final simultaneously befitting the name and belying the problematic cultural implications of the competitors, even if only for those 90 minutes.

For the first time in an awfully long time, the football is finally out of the way. To the message boards and social media platforms to discuss the pros and cons of a state-funded sportwashing project and the monopolisation of entire leagues.