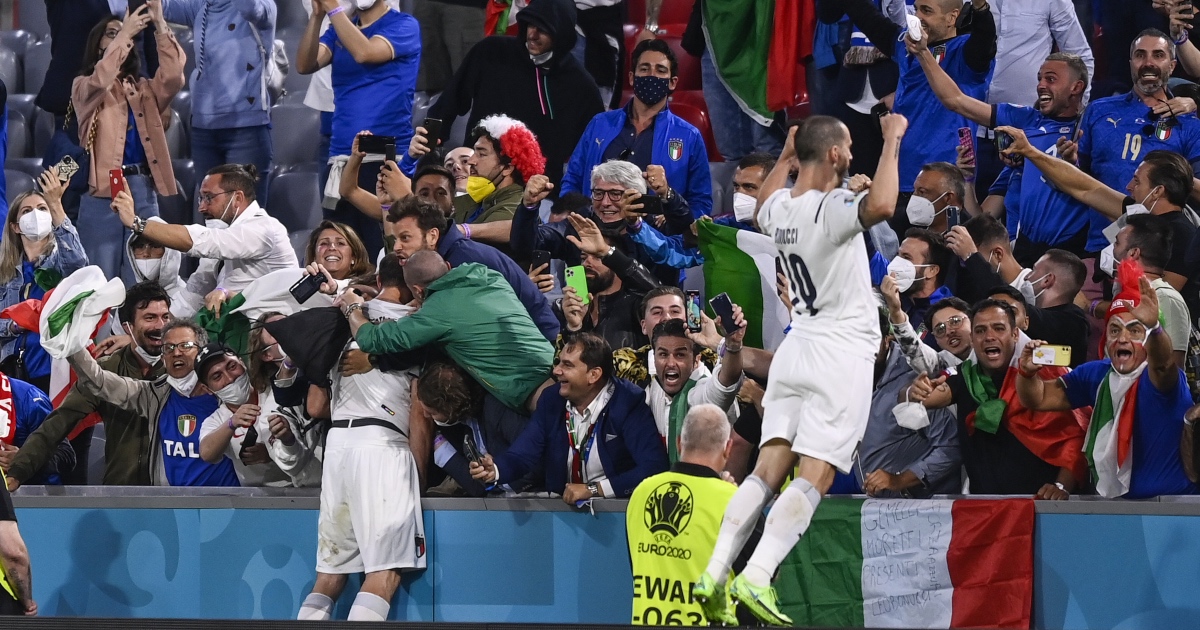 Italy’s way is one we’re all firmly on board with, while Belgium’s Golden Generation met its end on Friday.

Presumably Roberto Martinez’s mime of taking a breath was aimed at his Belgium side after Italy’s opener, but it also served to snap those of us with cold dinners briefly back to reality. But a couple of spoonfuls later and attention was drawn once more from culinary delights and back to this feast of football. It was a half-time micro-wa-vay and gobble job, before the breathlessness continued.

It was Italy who made this game what is was. Belgium are typically circumspect, but they were rarely allowed safe possession and – as has been the case throughout Euro 2020 – Italy continually forced the issue. Obvious passes are ignored in favour of progressive more risky ones and that makes for some wonderfully entertaining football.

It was chance after chance, mainly for Italy, but also for Belgium. And Italy accepting this we’ll-score-more-than-you style as their means to win football games is one of the great joys and stories of this tournament.

Jorginho has been one of the standout stars and he was brilliant once again against Belgium, keeping the ball and using it efficiently and effectively. He was almost faultless. But with him as the deepest lying midfielder in the side, there’s always danger, particularly when Kevin De Bruyne’s on the pitch. Jorginho just doesn’t have the speed to cover.

And it was in those moments, when Italy were high up the pitch with Jorginho pushing them on, that Belgium threatened. Through De Bruyne, surprise starter Jeremy Doku and Romelu Lukaku, they were always going to create chances on the break, and did.

But while such opportunity and freedom would have been met with shouts of displeasure from the touchline or the grizzled centre-backs from Italy of old, they’re brushed off by Roberto Mancini and this side he’s built, in the knowledge that those moments will be fleeting in comparison to the chances created at the other end in this complete reversal in mindset.

You feared for Belgium’s centurion centre-back trio against Italy and they did look overwhelmed. Jan Vertonghen gave the ball away horribly before Nicolo Barella wriggled past him and Thomas Vermaelen to give Italy the lead, and the space they granted Lorenzo Insigne to curl his shot beautifully into the far corner was baffling. Vertonghen, Vermaelen and Toby Alderweireld were the foundation of Belgium’s Golden Generation, which surely met its end on Friday. Their return for the World Cup – along with many other members of this squad – would be a certain indictment rather than the cause of niggling doubt as it was this summer.

But while Belgium are at the end of their cycle, Italy are at the start of theirs. Even if they don’t win this tournament – and many will have them as favourites now – their future is perhaps brighter than any other European nation. This new focus on attacking football, implemented from the bottom and rising to the top, means they all play with the same unerring belief that this is the way. And it’s a way we can all get on board with.