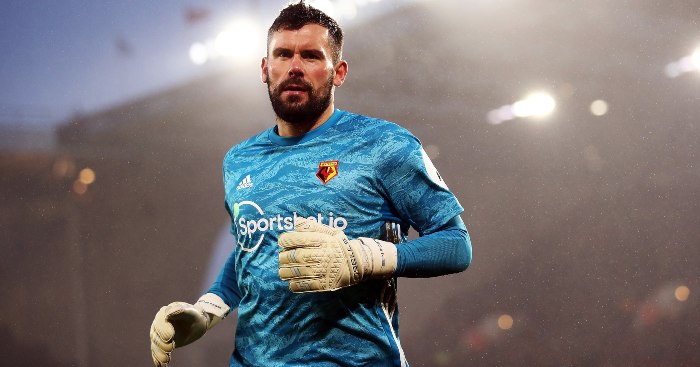 If you haven’t already watched it, take seven and a half minutes for yourself at some point and pore over the latest evidence submitted by Watford for Ben Foster being football’s most likeable bloke.

💛 @BenFoster just proves time and time again why he is the nicest man in football.

He kept his promise to 12-year-old Molly Hall and gave her a day she will never forget…#WATLIV pic.twitter.com/U6apwpUYY0

The back story is similarly essential viewing. Molly Hall, a 12-year-old diagnosed last year with leukaemia, and her family are the stars of the show but Foster is the headline name. The Watford keeper took time out to visit Molly at home before Christmas with a few gifts before making an impromptu promise for her to be a mascot for the visit of Liverpool on Saturday.

Watched together, it is a quarter of an hour to remind us of the importance of perspective; not that Foster needs it. Here he is, a few moments before standing in front of the Liverpool juggernaut when many would expect him to be firmly ‘in the zone’, and Watford’s last line of defence is joking about leaving wheelchair tracks on the pitch.

That gesture – simple to many beyond the game but alien to some within it – and the story of him helping an 80-year-old dementia suffer before Christmas, shows Foster for what most in the game already knew him to be: a thoroughly good egg. Not that he wants or expects any credit for that.

Football has plenty of similar characters, genuinely good guys not interested in ‘likes’ for good deeds, but the game needs this kind of exposure to show that it is isn’t always the “the circus” it is often perceived to be.

That was Foster’s own description of the environment in which he earns his living. Upon rejoining Watford in 2018, the former England goalkeeper had to clarify some comments he made the previous season during a season at West Brom which really could be described as a sh*t show.

“It’s not the football I don’t like,” Foster said. “I love playing. What I don’t like is all the sh*t around it, the circus.”

Aged 36, Foster is now a veteran comfortable in his own skin, possessing the self-awareness, of mind and body, many in football sorely lack.

That is not to say he isn’t driven to succeed. You don’t maintain the kind of longevity that Foster has achieved without sufficient motivation. But he is a different animal.

Since returning to Watford and at various times in an eight-year career at The Hawthorns, the former Manchester United stopper has been earmarked for an England return and only yesterday he was being touted for a return to a big club.

But unusually for a Premier League footballer, the type of individual who by definition should be dripping in ruthless ambition and insatiable drive, Foster doesn’t fancy adding to his eight international caps.

“I am too old,” he said last year. “We are blessed with English goalies at the moment. They don’t need me.”

Foster prefers to use the international break for some rest and relaxation away from the spotlight, and when you see the intense glare focused on Jordan Pickford at the moment, it is easy to relate.

Still, though, some cannot fathom Foster’s mindset, his perceived lack of ambition. He has always been happiest away from the main stage and he knew more than a decade ago, before he was sent on his way by Sir Alex Ferguson in 2010, that he wasn’t cut out for it.

“When I was back in the Man Utd goldfish bowl, there was nothing like that,” he told the Daily Mail last year. “It all felt very cut-throat and you just had to survive at all costs. They sold me to Birmingham and I couldn’t wait to go. I think Sir Alex knew that mentally I wasn’t right for the place.”

Foster’s contended mindset was in stark contrast to his teammates at Old Trafford during a time the Red Devils were driven enough to win all that was before them. The signing from Wrexham, who worked his way from being a chef, through non-league to the Football League before his big move, had a more unconventional journey to the top. Perhaps a life prior to United that wasn’t centred around football as the be-all and end-all gave him a healthier overall perspective, certainly in contrast to the relentless drive and dead-eyed focus that was a common theme among the United squad of the time: one crammed with professionals who had lived and breathed football enough to make it through the academy system on their way to the big time.

Foster signed for United when Roy Keane ruled the dressing room and when he finally occupied it after a couple of seasons on loan at Watford, it was Gary Neville’s domain. Relentless winners leading winners. Although Foster might not have cut it at Old Trafford, when he finally hangs up his gloves, he too will look upon himself as having achieved all he wanted to. And he should be applauded for it.

It comes down to your definition of winning. To the likes of Keane, Neville, Van der Sar and Ferguson – plus so many others in the modern game who throw the term around liberally without having achieved anything tangible in terms of honours themselves – it primarily means medals, trophies, titles.

To Foster, success is contentment and stability, both of which will set up him for life after football more than the financial rewards of a 15-year Premier League career. When that draws to a close, he will be remembered by most, if not everyone, not for the League Cup medals he won, but for being a damn fine goalkeeper and a kind-hearted, self-aware individual in an industry already overflowing with colder, more calculating ego maniacs.

Touching hearts and minds might not be as important to some as getting mitts on European Cups and there is little shame in that – those so driven and focused on titles and glory inspire our game to persistently reach new heights. But football can celebrate, too, the more rounded types, like Foster, who show up the ‘nice guys finish last’ mantra for the bullsh*t that it is.