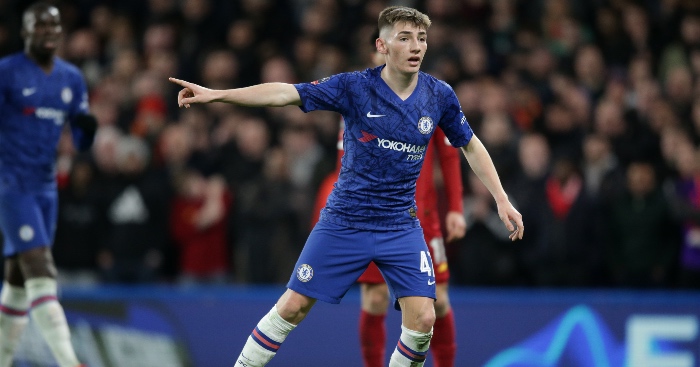 Giving yourself time to mull something over is important. Whether it’s saving a ranting email to a co-worker as a draft before sending it, leaving an exorbitantly-priced retro football shirt in an online basket for a few hours, or sleeping on an article about a footballer who has played well or badly in just a game or two. A decision made in the moment can make you look very silly. Learning that Phil in accounting didn’t get back to you as he was mourning a loved one, wearing your ill-fitting 1994 Roberto Baggio replica, while attempting to defend your claim that Josh McEachran is Chelsea’s midfield saviour, will make you wish you had taken the emotion out of your decision. So I have slept on this, five times actually, but my view has barely shifted. Billy Gilmour is f***ing brilliant.

Frank Lampard has handed a club record eight debuts to academy products at Stamford Bridge this season, often out of necessity rather than desire to promote from within. Mason Mount, Tammy Abraham, Reece James and Fikayo Tomori have all had very good first full seasons in the Premier League for Chelsea. But other than James – who has been excellent since his first start – there has been some understandable inconsistency among them.

Abraham started with a bang, racing to 11 goals in his first 15 games, before a combination of injury and a dip in form has seen him score just three in the last 14. Mount similarly started well but was understandably burnt out by Christmas before now rediscovering the verve that makes him dangerous. And the competition for places at centre-back has seen Tomori relegated to a watching brief for most of the second half of the campaign.

And although that variability in performance is to be expected from young players, it does serve to increase those lingering doubts as to whether these youngsters can win Chelsea Premier League and Champions League titles. Youth development is great, but the Blues fans have had more than a taste of success, and they will chew through the unwanted gristle to get to the good stuff if they have to.

Despite a ludicrously small sample size of four games, Billy Gilmour has proved that he is that good stuff. Very little doubt remains after his Man of the Match performances as they knocked Liverpool out of the FA Cup, and smashed Everton in the Premier League. Olivier Giroud looked on like a proud father as he handed over the second of the youngster’s awards, marvelling – like the rest of us – after another extraordinary performance that belies his tender age. The 18-year-old said the experience has been “a bit surreal”, but it’s been far more bizarre for those of us watching. Roy Keane forgot about his tea and biscuits, and admitted he joined in the collective ‘who is this kid?’ It is no coincidence that these were two of Chelsea’s best performances this season.

Combative, aggressive and progressive; he knows when to play and when to put his foot on the ball. Pulling players nearly twice his age into position and pointing to where forwards should be making runs. Ross Barkley’s pinpoint first time through ball was the more memorable aspect of Pedro’s goal against Everton. But the way in which Gilmour brought the ball forward and played a no-look pass into Giroud’s feet in the buildup, was sublime. And was one of many examples across the two matches of the youngster exhibiting the facet of the game that makes a good defensive midfielder great – the ability to play through the lines.

He puts his foot in where necessary, covers more ground than anyone, and his calmness and confidence in possession is astonishing. Lampard was right to liken Gilmour to Jorginho, in that they both have “the balls to play in difficult areas of the pitch”. But Gilmour has more to his game than Jorginho, or at least uses the full range of his passing repertoire more regularly. An excellent first-time clip round the corner or a midfield splitting pass into the frontman is a rarity for the elder statesman, who in spite of his confidence in possession, often seems more concerned with retaining it, rather than using it to create opportunities.

Diving headfirst into the hyperbole-filled pool of player comparisons, Gilmour reminds me more of Marco Veratti: Small in stature; big in mentality; coolness personified. Chelsea have a second leg to play against Bayern Munich at some point (maybe), and Gilmour has a very good chance of starting with Jorginho suspended. After the Blues were witness to a clinic laid on by Thiago and Joshua Kimmich in the centre of midfield in the first leg, a prospective match-up between them and Chelsea’s own midfield dynamo is a mouth-watering prospect. Though save some saliva; if it happens, it won’t do for a while…

With Josh McEachran – Chelsea’s last great central midfield hope – now sitting on the bench or at home with his Birmingham side firmly rooted in the bottom half of the Championship, I realise the fall I am setting myself up for. But this doesn’t feel like the build-up he got, or of some of Chelsea’s other young stars this season, which has tinges of a false dawn, and a sense that they could make the highest grade but could just as easily fall short. Billy Gilmour is a dead cert, and you can hold me to it.