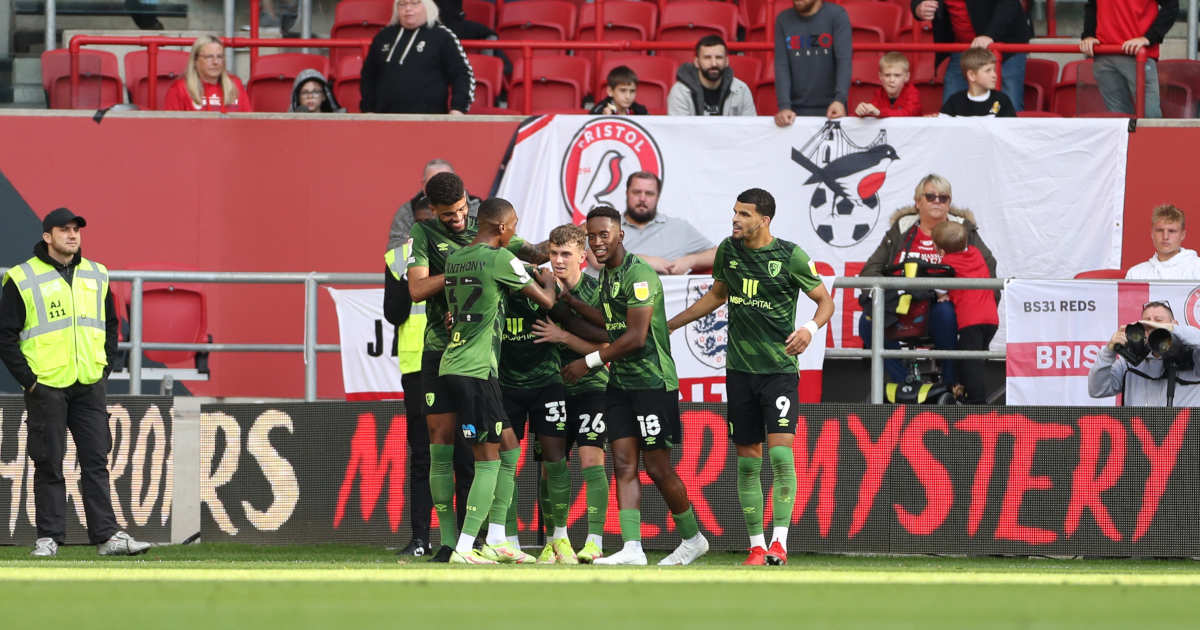 Bournemouth are top of the EFL Championship and remain unbeaten in the league, but they’ve had to deal with some really shocking recent news.

Within five minutes of the start of the second leg of their play-off semi-final against Brentford in May, Bournemouth appeared to be Wembley-bound. They’d won the first leg at The Vitality Stadium 1-0, and an early goal from Arnaut Danjuma in the return match had given them a two-goal aggregate lead which looked difficult to overcome. But a couple of hours later, their season was in tatters. Ivan Toney cancelled out their lead 11 minutes after Danjuma’s strike, and second-half goals from Vitaly Janelt and Marcus Forss completed the turnaround.

A week later, Brentford returned to the top flight for the first time since 1947, and at the end of June it was confirmed that manager Jonathan Woodgate would not be extending his contract. He’d only been in place for just over four months, having come into the club following the departure of Jason Tyndall, who had left the club after a run of form which saw them drop from second place in the table just before Christmas to sixth by the start of February.

But with a shade over a quarter of this EFL season now completed, only Bournemouth remain undefeated, sitting proudly at the top of the Championship, six points clear of second-placed West Bromwich Albion and eight ahead of third-placed Fulham. Their 13th league match of the season ended in a 1-0 win at Stoke City, who themselves had started this season with the momentum of a team that means business in the cut-throat world of escaping the Championship in an upward direction. After the disappointment of last season’s end, it’s been a strong start this time around for Bournemouth.

And make no mistake about it; Bournemouth may need promotion. This is their second season back in the EFL following their five-year sojourn in the Premier League, and that means that next season will be their final year of ever-decreasing parachute payments. Their last set of published accounts for the year ending June 2020 confirmed why they need it; the club recorded its fourth successive financial loss, with this one amounting to £60.1m, not far short of double what they’d lost the year before.

Everywhere you look in those accounts, the numbers are eye-watering. Match and season ticket income dropped by nearly a third, while earnings from hospitality and shop merchandise both fell by about 20% each. Meanwhile, the club’s wages to turnover ratio more than doubled in four years, from 53% in 2016/17 to 113.1% for the 2019/20 season, not a number that is particularly unusual in the apparently financially illiterate world of the EFL Championship, but pretty disastrous when viewed dispassionately as a business overhead.

In short, with a stadium with a capacity of just 11,364 and relatively limited commercial opportunities, Bournemouth became over-dependent on Premier League television money like almost no other in recent years. For their last season of Premier League football, 85% of their total income was television money, and although the argument that parachute payments does give the recently relegated a distinct advantage over those who don’t receive them, they present a sobering problem for clubs who’ve become dependent on Premier League television and prize money.

Bournemouth will have received 55% of the amount that each Premier League club receives as part of its equal share of broadcast revenue last season, 45% this time around, and will receive 20% next season, should they remain below the Premier League. This season’s payment equates to around £35m, but they will get about £20m less next season, should they fail to go up this season. Even allowing for various cost-cutting measures that have been brought in by the club (the sale of Danjuma to Villarreal for around €25m in August will have balanced the books a little), reduced parachute payments are a big gap to bridge, especially when we remember that financial losses in the Championship are limited to £39m over any rolling three-year period. And it’s also worth remembering that Bournemouth were fined £4.75m for breaking FFP regulations to get into the Premier League in the first place.

But a football club is more than mere numbers, and there has been one story which has been a terrible shock for everybody at the club, with the announcement that midfielder David Brooks has been diagnosed with Stage Two Hodgkins Lymphoma. Brooks has made almost 80 appearances for Bournemouth over the last three years and has also been capped 21 times by Wales, and it is particularly shocking to hear of this diagnosis when the player concerned is just 24 years old. The strength of feeling that this has elicited from the Bournemouth players could be seen in the tribute made by team-mate Jamal Lowe during their 2-0 win at Bristol City.

Overseeing all of this has been Scott Parker, who arrived following Jonathan Woodgate’s departure as the club’s third manager since Eddie Howe resigned upon relegation from the Premier League. As Howe considers the possibility of becoming one of the public faces of the Saudi Arabian takeover of Newcastle United, Parker had built a team with a strong defensive backbone – they’ve conceded just eight goals in 13 games in the league – but which has a little bite, as evinced by their match against Sheffield United, where they fell behind early in the second half but still had the focus to fight their way back into the game and win 2-1.

With a new manager – at a club that had previously been unable to fill the void left by a long-term predecessor – an exceptionally talented young player struck down by a cruel illness, and the potential for financial issues to raise their head, this could have been a difficult and tense season in the Championship for AFC Bournemouth. It’s been just 12 years since they finished fourth from bottom in the entire Football League, and since then they’ve journeyed all the way up to the Premier League. And for a club of this size, there is a real risk of losing that hard-earned momentum and slipping back into the lower divisions.

But Bournemouth have recovered from the disappointment of the end of last season, are managing the situation regarding David Brooks as well as they can, and are at present looking at least likely to return to the Premier League come the end of this season. If Scott Parker’s team can keep their cool, then they have an excellent chance of returning to the top table come the end of this season. They’re tight at the back and have a fair sprinkling of attacking flair, and with a manager who knows this division, they seem set fair. And should they make it back to the Premier League at the end of this season, there’ll be one player in particular for whom they’ll have a special spot saved. Get well soon, David.